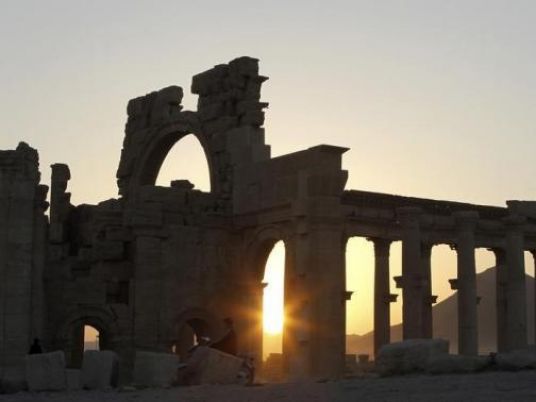 France and the United Arab Emirates on Saturday launched a $100 million fund to protect heritage sites threatened by extremism and conflict after the destruction last month of an ancient palace by Islamic State militants in Iraq.
The fund, announced at an Abu Dhabi conference attended by President Francois Hollande and Abu Dhabi Crown Prince Sheikh Mohammed bin Zayed al-Nahyan, will be used to create "safe havens" for endangered artifacts and to transport and restore monuments damaged by war, UAE state news agency WAM reported.
"Conflict causes irreparable damage to valuable heritage sites in Syria, Iraq, Mali and many others," WAM quoted Mohammed al-Mubarak, chairman of Abu Dhabi's tourism and culture authority, as saying.
"Today, we establish a $100 million fund to focus on protecting and rebuilding these sites."
The statement did not provide further details.
Roman-era temples in Syria, museums in Iraq and ancient stucco buildings in medieval Yemeni ports have been marred by wars that have swept the region since 2011.
France and the UAE are part of a U.S.-led international military coalition fighting Islamic State militants in Iraq and Syria and say they want to protect artifacts threatened by air strikes, smugglers and militant groups.
Islamic State fighters last year dynamited several monuments including the Baal Shamin temple in the ancient Syrian city of Palmyra, an act the U.N. cultural agency UNESCO called a war crime.
"This fanaticism is an attack on civilizations and thus on the unity of the human species," Hollande told the UNESCO conference, referring to Islamic State in Iraq and Syria.
Hollande also rebuked Syrian authorities for destroying Syria's diverse cultural heritage.
"In Aleppo, those who have chosen to unleash violence kill the Syrian people twice over – in the flesh with the bombing raids and the massacres which are taking place and in memory by (destroying) the most prestigious objects of humanity," he said.