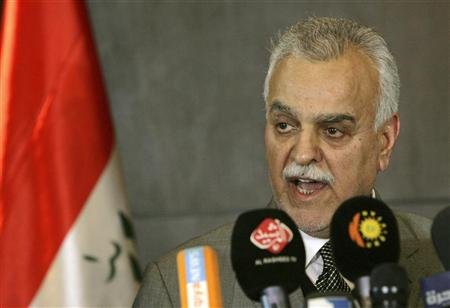 An Iraqi court sentenced fugitive Vice President Tareq al-Hashemi to death for a second time on Thursday on a charge of involvement in a plot to assassinate an interior ministry official, a judicial spokesperson said.

Hashemi, a Sunni Muslim who fled to Turkey earlier this year when Shia-led Iraqi authorities sought his arrest, was subsequently sentenced to death in absentia on charges of running death squads, which he denies.

"The central criminal court issued a death sentence against Tareq al-Hashemi and his son in law for incitement to attach a sticky bomb to the car of an interior ministry officer," said Abdul-Sattar al-Birqdar of Iraq's Supreme Judicial Council.

Hashemi could not immediately be reached for comment on the latest sentence.

Hashemi has said the first case was built on testimony extracted under torture and accuses Prime Minister Nouri al-Maliki, a Shia Muslim, of conducting a political witch-hunt against Sunni opponents.

Many Iraqi Sunnis say they see a sectarian hand behind Hashemi's case, accusing Maliki of shoring up his position at their expense. The case has caused a crisis in the power-sharing government grouping Sunni, Shia and Kurdish blocs.

A series of explosions hit Iraq on the same day of Hashemi's first court sentence, triggering one of the worst spates of bloodshed this year with more than 100 killed across the country.

The second sentence imposed on Hashemi could stir further violence in Iraq, where the Shia-led government is grappling with political instability and a Sunni Islamist insurgency nine months after the departure of the last US troops.