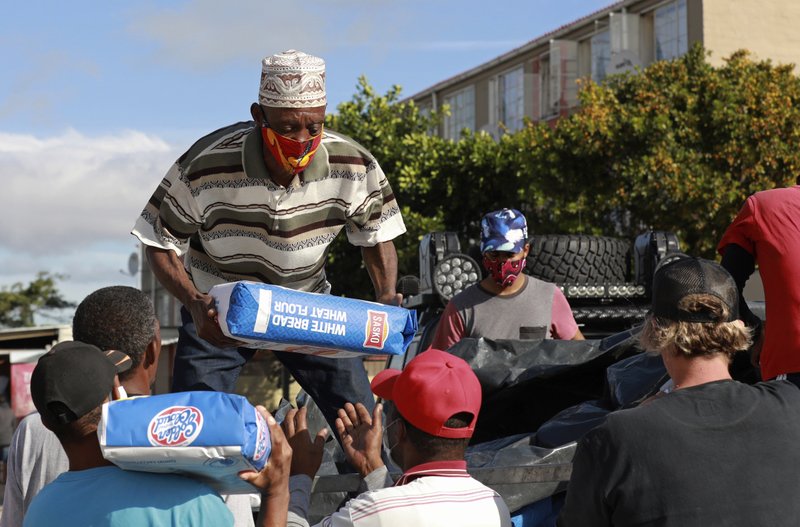 CAPE TOWN, South Africa (AP) — Preston’s new face mask is emblazoned with the stars and stripes of the US flag.

While protecting him from the coronavirus, it would normally also put him in danger in Manenberg, one of a number of violent and poor neighborhoods on the outskirts of Cape Town known as the Cape Flats. The mask’s colors identify Preston as a member of the Americans, a criminal gang usually unwelcome on the turf of the rival Hard Livings gang.

“They’d shoot me,” the 35-year-old says with what appears to be a smile, his eyes crinkling.

But today, he’s working side-by-side with other notorious gang members to deliver bread, flour and vegetables to poor families who are struggling during South Africa’s coronavirus lockdown, which has closed industries and left many in Manenberg without work.

Preston stands in a courtyard with the other gang members amid an unlikely truce, bowing his head as Danny, a senior member of the Hard Livings, says a prayer. Caps are removed and tattooed arms are held behind backs.

“We (the gangs) did decide to work together to help,” Danny said. “And we have got no problem (with each other), you see. No problem.”

The project was started by Andie Steele-Smith, an Australian known as the “gang pastor.” They ride in the back of his pickup truck and trailer, leaping off to carry items to homes and soup kitchens.

Steele-Smith said that “as soon as these guys were given an opportunity to do something good, they grabbed the opportunity with both hands and are just wringing it for everything they can.”

The gangs also benefit, getting some food as well as the chance to stay relevant in tough times. They also seem to enjoy the role of modern-day Robin Hoods.

Still, these men are drug dealers and many are killers. A lot of them have tattoos that identify them as members of prison “Numbers” gangs, which experts say are far more violent.

One who doesn’t think much of their good deeds is J.P. Smith, who works in the mayor’s office of Cape Town in charge of safety and security. He says their real business is murder, extortion, trafficking in drugs and guns, protection rackets and corrupting police and judges, noting there were 900 gang-related killings in the Cape Town area last year.

“None of that goes away because the gangsters suddenly pretend to do something nice,” Smith said. “The trauma they’ve inflicted on communities for decades won’t be forgotten for a couple of loaves of bread.”

Manenberg resident Cristal van Rensburg says two cousins were killed by gang members, with one shot 30 times in the face and chest. Her brother and other relatives also are in gangs, and she says she often sees her cousins’ killers on the street.

“In the beginning it was difficult,” she said. “It’s not a good feeling to lose someone and know that person who hurt your family is walking past you every day. You see in Manenberg, that’s part of life.”

Despite its beauty, Cape Town was ranked last year as the 11th most-dangerous city in the world. According to the Mexico City-based Citizen Council for Public Safety and Criminal Justice, which compiled the list, Cape Town had 2,868 homicides in 2018, the second-most on the list behind Caracas, Venezuela.

An attempted truce has accompanied the food distribution, and Smith said police have reported a decrease in trouble in Manenberg in recent weeks.

But the grim reality is still evident.

During the food delivery, the pickup truck encounters people who say a man has been stabbed to death, and the victim is a member of a gang known as the Clever Kidz.

Santjie, a local leader of the gang who is riding on Steele-Smith’s truck, had earlier made a comment that has become suddenly relevant: “Life here is very quick. It’s very quick.”

Residents of Manenberg seem to live either in government-built housing blocks called “the courts” or in haphazard houses on unmarked streets.

The headquarters of the Americans is a multistory labyrinth with “Welcome 2 United States” scrawled on it. Across the street is more graffiti, misspelled and perhaps mistaken: “God loves Manenburg.”

The neighborhood was created by South Africa’s apartheid government in the 1960s as a dumping ground for poor non-whites who were evicted from Cape Town’s prime land. Steele-Smith describes it as “forgotten” and lacking hope.

Danny, Preston and Santjie, who spoke to The Associated Press on condition that only their first names are used because they belong to criminal gangs, say they have much in common: all have been shot and all have been to prison.

Danny is 61 and says he was behind bars for 29 years for murder and armed robbery. The other two don’t specify their crimes. Santjie, the youngest of the three at 31, has been “in and out” numerous times, he says.

All three saw joining gangs as natural — boys are recruited in their early teens or younger.

Preston says he may eventually quit his gang, but Danny warns: “If you turn your back on your gang, you’re a target.”

Leaving a gang means giving up protection. A local saying goes that the only sure way out of a Cape Flats gang is death.

The Rev. Eric Hofmeyer used to be a member of the Hard Livings gang, joining when he was nine but getting out at age 21 in the 1980s. He says he survived two stabbings by rival gangs and also escaped death when police interrupted an attempt by his own gang to kill him.

He says the food project shows that the new generation is open to change.

“I believe there is a way out for those young men,” he said.

Image: In this May 2, 2020, photo, Danny, a senior member of the Hard Livings gang, helps distribute food with rival gang members in Manenberg neighborhood in Cape Town, South Africa. The gangs are working together, under the direction of a preacher, to deliver bread, flour and vegetables to poor families who are struggling during South Africa’s coronavirus lockdown. (AP Photo/Nardus Engelbrecht)