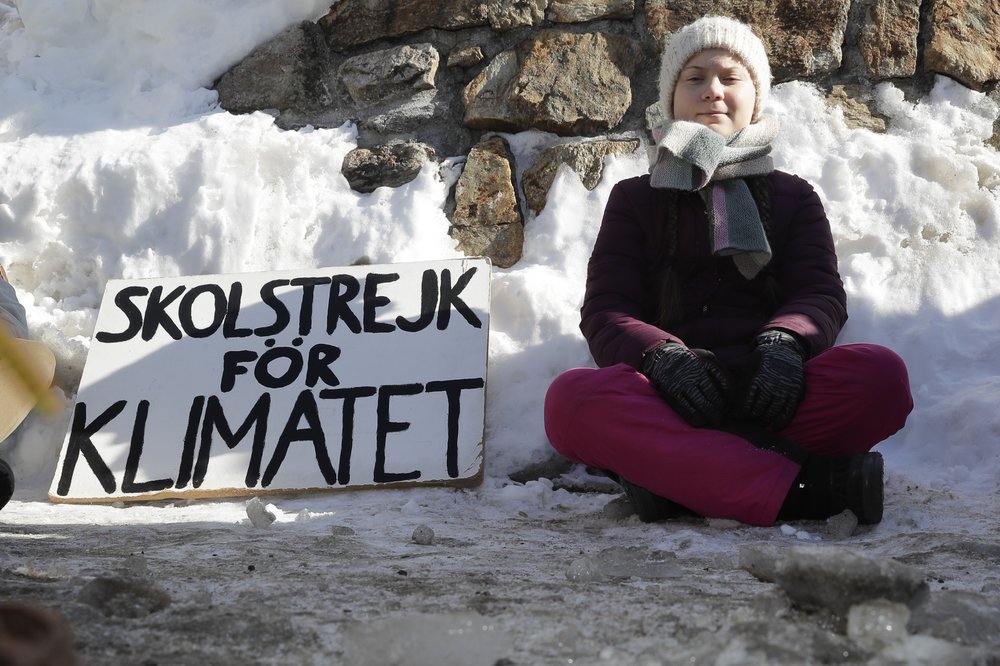 BERLIN (AP) — It’s safe to say that anyone flying to this year’s global climate conference in Madrid had better have a watertight excuse if they meet Greta Thunberg.

The Swedish teen has set a high standard for government officials, scientists and environmental campaigners attending the Dec. 2-13 talks by deciding to sail back across the Atlantic following a last-minute switch of venue from Chile.

Thunberg’s steadfast refusal to take the plane to Spain is a key plank of the message of the worldwide movement she has helped create, and of the earnestness with which its followers pursue their cause.

Hundreds of thousands, if not millions, of mostly young people are expected to rally in cities around the world Friday to demand that governments step up their efforts to curb climate change.

Thunberg is likely to join them in spirit from the sailboat La Vagabonde on which she’s crossing the Atlantic together with a small crew. She’s hoping to make it to Madrid in time to put world leaders on the spot — again — about what they are doing to protect her generation from the worst of global warming.

The 16-year-old has become an inspiration to peers such as August Wietfeldt, a senior at Lusher Charter School in New Orleans who says Thunberg has helped highlight the way previous generations have used up resources unsustainably.

“The short-term gain is just awful because then our generation, and ones after that, will need to bear the consequences,” he said.

Wietfeldt fears climate change could trigger massive economic and social problems akin to those seen in the 1930s, when severe drought caused mass migration away from America’s farming heartlands to the western states.

“If we don’t fight land loss, then that’s going to happen again,” he said. “We really need to be taking action to prevent scenarios like that.”

Together with other members of the school’s SEA Club — Students for Environmental Action — Wietfeldt has been helping pick up trash at a park on the Mississippi River.

An ocean away, Jennifer Selfa shares that hands-on spirit in her school conservation group in Lagos, Nigeria.

“Some of the things I have been doing to reduce climate change are planting of trees,” the 15-year-old said.

Teacher Victoria Ebesunan said the students are helping battle ignorance about climate change, spreading the word in the local dialect — rather than English — about the need to protect the environment.

This growing awareness has become a big factor in the climate debate over the past year, said Andrew Steer, head of the Washington-based environmental campaign group World Resources Institute.

“We’ve never had 7 million people, almost all young, marching before,” said Steer, referring to the ‘global climate strikes’ that have marked moments of concerted worldwide protest over the past year — often organized largely over social media.

Thunberg alone has amassed more than 3 million Twitter followers since first launching her one-person protests in front of the Swedish parliament last year.

Steer said it’s unclear yet whether the movement, diffuse as it is, will continue to grow. But indications are that in the upcoming United States presidential election at least, climate change will play a prominent role.

“The issue is rising on the agenda both in the United States and globally,” he said.

Last year, New Harmony High School opened with the goal of preparing students for careers in coastal protection and restoration.

“We want to help, so we can stay here longer than 50 years, because I want to raise my children here,” said sophomore Michael Bailey as he recently used a shovel to cut invasive vines away from a native tree.

“Making a little change — we might see what’s gonna happen.”

Earlier this year, signs of a ‘green wave’ in politics emerged in elections for the European Parliament, where environmental parties were among the big vote winners.

Austria’s Green party is poised to enter government for the first time, while in neighboring Germany its sister party has been riding high in the polls for months.

Franziska Heinisch, a 20-year-old student and climate activist from the southwest German city of Heidelberg, said she’s hopeful that ‘Generation Greta,’ as some have called it, is being heard by those in power. This week’s global rally will be followed Dec. 6 by a demonstration in Madrid, half-way through the climate conference.

“The pressure is simply growing,” said Heinisch, adding that Thunberg’s blunt talk — she famously confronted world leaders in New York with the words “how dare you?” — reflects some of the anger young people feels toward its elders.

For Johan Rockström, co-director of Germany’s Potsdam Institute for Climate Impact Research, the youth movement has injected an element of morality into the climate debate, said Rockström.

“(It’s created) a new narrative across generations in society to say, look, here: a healthy, clean, sustainable, safe future is what we want,” he said.

Later generations might one day look back and see the start of mass protests as the moment when the tide began to turn on global warming.

“We don’t know yet, but it could be the tipping point,” said Rockström.

Reporting by Frank Jordans; Dorothee Thiesing in Berlin, Lekan Oyekanmi in Lagos, Nigeria, and Rebecca Santana and Stacey Plaisance in New Orleans contributed to this report