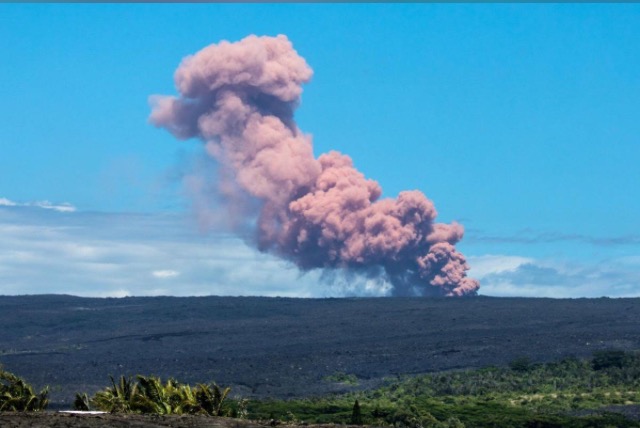 Hundreds of people were under an evacuation order on Friday after the Kilauea Volcano on Hawaii’s Big Island came to life, belching ash into the sky and spewing fountains of lava in a residential area, officials said.

The volcano, one of five on the island, erupted on Thursday after a series of earthquakes over the last couple of days, including a 5.0 tremor earlier in the day, the U.S. Geological Survey reported on its website.

Residents in the Puna communities of Leilani Estates and Lanipuna Gardens subdivisions, home to about 1,700 people, were ordered to evacuate after public works officials reported steam and lava spewing from a crack, according to the county’s Civil Defense Agency.

“Please be alert and prepare now to keep your family safe,” he said on Twitter to residents living near the volcano.

No injuries or deaths were reported.

Footage from a drone aired on the Hawaii News Now website showed lava incinerating trees as it crept near structures.

A 492-foot-long (150 m) fissure erupted with lava for about two hours in Leilani Estates at about 5:30 p.m. local time, the Hawaii Volcano Observatory said on its website.

“The opening phases of fissure eruptions are dynamic and uncertain. Additional erupting fissures and new lava outbreaks may occur,” it said.

A plume of red ash rose from the volcano’s Pu’u ‘O’o vent high into the sky over the island, according to photos on social media.

The Puna Geothermal plant was shutting down, according to local media, while Hawaii Electric Light said crews were disconnecting power in the areas impacted by the active lava flow.

The Kilauea Volcano has been erupting nearly continuously for more than three decades. Lava flows from the volcano have covered 48 square miles (125 sq km), according to the US Geological Survey.