Sobs filled the roofless church of a poor village in southern Egypt Monday as funeral prayers were said by the families of 13 Coptic Christians beheaded in Libya by jihadists.

At a mass in the Minya province village of Al-Our, male relatives of the dead grieved and some demanded vengeance a day after the Islamic State group released a video showing the decapitation of 21 Copts kidnapped in war-torn Libya in January.

"My son left for Libya 40 days ago after finishing his military service," Boshra, a civil servant in his 50s, said of his 22-year-old son Kirollos.

"He went to earn money so he could get married," he added before breaking down.

Black-clad women relatives, their hair covered, wailed as they mourned in a nearby house off a dusty narrow street of small adobe and red brick buildings.

In the church, with its straw-covered altar, stern-faced men wearing the traditional djellaba robes of southern Egypt stood, some giving vent to their emotion and bursting into tears.

Coptic Christians form some 10 percent of the population in Egypt, the Arab world's most populous country.

In Minya they are well represented, but have also been the target of sectarian attacks in the past.

Like hundreds of thousands of their compatriots working in Libya in the construction or service industries, the 13 Christians had gone there in search of a better life.

Kirollos earned almost $25 (22 euros) a day — five times what he could hope for at home.

The 13 sons of Al-Our were all cousins and labourers, and all lived in the same house in Libya.

That was before IS jihadists stormed the building and ordered its owner to "hand over the Christians", relatives told AFP.

Some villagers who had been to Libya and returned safe and sound denounced abuses they said they suffered there because of their religion.

Libya in 2015 is a country out of control, where armed militiamen run amok and rival political groups plot and jostle for power.

Since longtime dictator Moamer Kadhafi was toppled and killed in a popular uprising in 2011, the North African nation has spiralled into constant chaos.

"Libyans would make us get out of cars on the pretext of checking our passports," 35-year-old Emad Khalaf said on Monday.

"When they saw the cross tattooed on our wrists they'd beat us and steal our money."

The horror of the IS video spread panic among the relatives of Egyptians who still have dear ones working in Libya.

"My brother has been a plumber in Misrata for 18 months, and his wife and children are with him," a visibly worried Daoud Aziz told AFP.

"He called today and said he wants to come straight back home, but the first plane he could find was in two weeks."

For the relatives of the dead, the only hope now is that they might get the bodies back so they can be given a decent Christian burial.

But some also thirst for vengeance.

"President (Abdel Fattah al-) Sisi must let us join the army and send us out there to avenge the deaths of our sons," said one man called Fawzi.

Egypt has been swift to react after the release of the beheadings video. At dawn on Monday, its warplanes bombed jihadist targets in Libya in response.

The authorities have also offered compensation to the relatives of the victims — more than $25,000 (22,000 euros), half of which was pledged by a private company.

But for heartbroken father Isis, who lost his two sons Samuel, 26, and 23-year-old Bishoy, "nothing can replace our children". 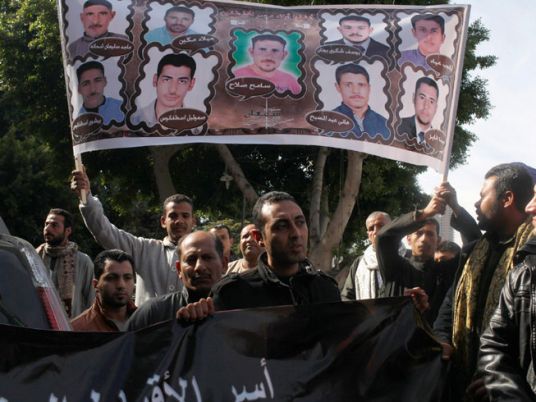 Jobless and desperate, Egyptians risk all in perilous Libya