Heavy shelling by Russian forces is continuing along “the entire line of contact” in the eastern regions of Donetsk and Luhansk, according to the Ukrainian military.

Russians troops are also trying to inflict air strikes in certain areas, said the General Staff of the Armed Forces on Friday.

The Izium area of eastern Ukraine, located in the Kharkiv region, has become a staging ground for Russian forces as they try to advance through neighboring Donetsk and Luhansk. No offensive operations in that area have been conducted in recent hours, said the Ukrainian military.

“The main effort was focused on reconnaissance, identification of defensive positions of the units of the Defense Forces of Ukraine and hitting them with artillery fire,” said the General Staff.

Further southeast, “in order to prevent the redeployment of our troops, the enemy is shelling the positions with artillery, mortars and multiple rocket launchers along the entire line of contact,” it added.

Cutting off Russian pathways: An important bridge in southern Ukraine, which connects Russian-occupied Crimea with the Ukrainian city of Melitopol, has been destroyed, CNN reported on Thursday. Melitopol has been held by Russian forces since early March.

Melitopol Mayor Ivan Fedorov confirmed on Ukrainian television that Ukrainian special forces were responsible for cutting off the crucial bridge.

“Yesterday our military forces of special operation blew up the bridge, which was of great logistical importance for the occupiers, because with the help of this bridge they transported military equipment to the stations of Melitopol and Novobohdanivka,” he said. 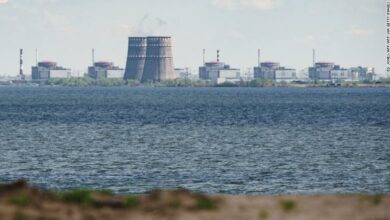