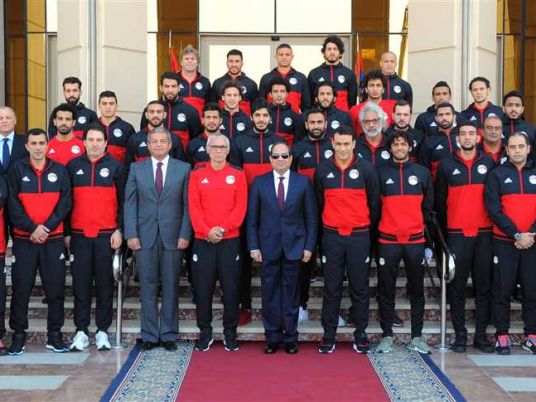 President Abdel Fattah al-Sisi received the national football team at Cairo International airport, upon their return from Gabon on Monday. The flight arrived at 1 pm. After the reception, the team met  with people and media at the airport.

The final game on Monday between Egypt and Cameroon in the Africa Cup of Nations ended 2-1 to the Cameroonian team, winning them the pretigious title.

“Despite the final result of the game, the team won the appreciation of all Egyptian people as well as the respect of football fans from around the world,” read a tweet from Sisi's official account after the match.

High-level security measures were enforced at the airport, which was secured by the presidential guards, sources told Al-Masry Al-Youm

Sisi praised the national football team for its efforts made during the Africa Cup of Nations.

“You deserve all [our] appreciation, respect and greetings. Egyptians, and the Arab nation as a whole, enjoyed your performance. Good job. Thank you,” Sisi said on Monday as he received the team at Cairo International airport.

“Please hold your heads high. We appreciate that we haven’t been qualified for many years,” he added. “We feel your pain, just as you do. This is not a compliment, but [our] real appreciation of you. Your continued efforts will achieve all of your dreams, as well as Egyptians’."

Ramadan Sobhy, a national team player, expressed his happiness that Sisi received the team at the airport. “I couldn’t believe [I was] shaking hands with the president,” Sobhy said.