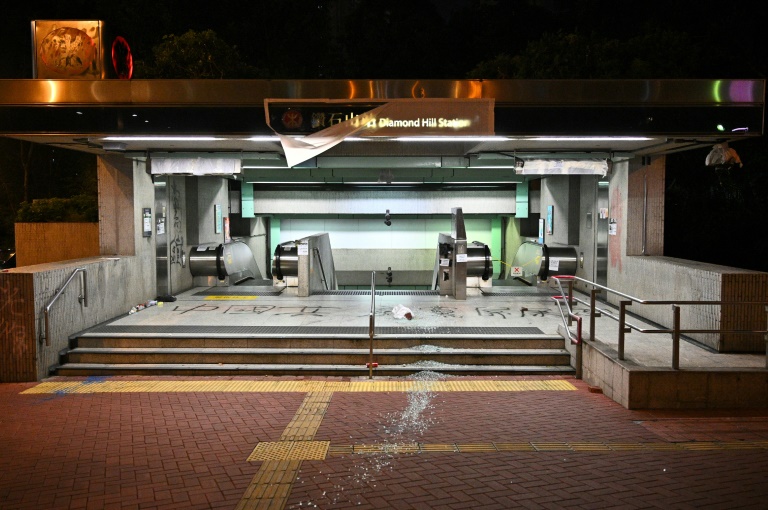 Hong Kong’s more hardline pro-democracy protesters have embraced increased violence towards private property, businesses and even people, triggering some soul-searching within the movement. But few moderates are willing to abandon their more radical comrades.

Even by the standards of Hong Kong’s summer of rage, the last fortnight has been brutal.

After months of focusing their anger towards police, local government and symbols of Beijing’s rule, hardcore protesters went on an unprecedented city-wide vandalism spree after the city’s leader invoked emergency powers to ban face masks.

The subway system — viewed as an enemy for ferrying police and shuttering stations — was crippled, with some 2,400 ticketing machines and turnstiles vandalized alongside 900 CCTV cameras in 83 of the city’s 94 metro stations.

Businesses perceived to be mainland-Chinese owned or Beijing loyalist were trashed with color-coded lists detailing which companies were fair game and which should be left alone.

In one incident, a Chinese JP Morgan employee was punched in the face as a crowd shouted “Go home!”. In another, a man who tried to stop protesters defacing a Chinese flag was repeatedly assaulted.

The scenes have provoked debate on the online forums used to organize the largely leaderless protests.

One post — which received more than 9,000 upvotes — asked whether radicals were going after the wrong targets.

“Continuing to escalate vandalism will only help public opinions on the opposite side and lose our support from international community,” the author wrote, fretting that radicals risked being seen as a new iteration of Mao’s violent “Red Guards”.

At a press conference on Friday night, anonymous protesters hinted at concerns some of the violence might be counter-productive.

“I hope fellow companions will not be controlled by hatred,” a spokesman said.

But there was little let up in the chaos Sunday with more vandalism and fights erupting across the city.

Meanwhile, China’s leader Xi Jinping said during a state visit to Nepal that any attempts to split China would result in “bodies smashed and bones ground to powder”.

Yet the violence appears to have done little to dent mainstream support.

Political analyst Dixon Sing said this was because neither Beijing nor Hong Kong’s government have given protesters any incentives to de-escalate after four months of wielding a stick and offering few carrots.

“The increase in violence of the police has been a major factor in not detracting the overall support for the protesters, including those increasingly militant and violent attacks,” he added.

Two teenagers were also shot and wounded with live rounds during melees with protesters, while an AFP journalist filmed an officer throwing a heavy rubbish bin from a bridge onto fleeing demonstrators.

A phrase commonly adopted by protesters roughly translates to “we will not sever ties” pushing the idea the movement must remain unified — even if people disagree over tactics.

“Even if we’re not in full support of what they do, at least we try to show some sympathy and understanding,” said Claudia Mo, a veteran pro-democracy lawmaker who advocates non-violence.

Bonnie Leung — who helped organize the mass protests earlier this summer that were ignored by Hong Kong’s government — said many moderates felt gratitude to the movement’s radical wing, who are dubbed “the braves”.

“All protesters are indebted to the braves as without them the bill would have been passed,” she said, referencing a now scrapped plan to allow extraditions to China, the catalyst for the initial protests before they snowballed into a wider democracy and police accountability movement.

“There are discussions on the strategies though, whether the escalation is leading anywhere, and whether some actions should be stopped,” she added.

“We have doubts, we discuss, we try to convince, but we are still united and still don’t split.”

John, a self-described moderate protester in his forties, explained why he and his middle-class family still supported “the braves” as he ate McDonalds with his nine-year-old son.

“They saved this movement and are taking all the risks,” he said, asking to only use his first name. “We have to be there for them now.”