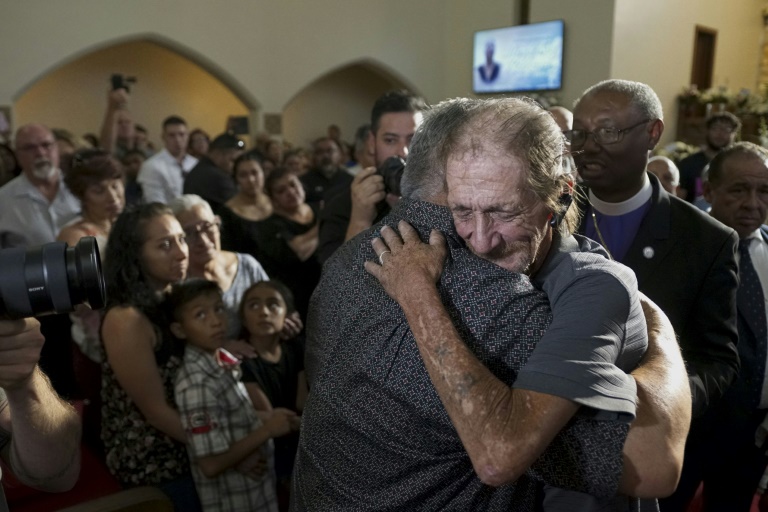 Hundreds of mourners attended the memorial Friday of a woman they had never met, a victim of the El Paso shooting earlier this month, after her husband opened the service to the public.

When 63-year-old Margie Reckard died in the Walmart shooting that killed 22 people in the Texas border city on August 3, her husband Antonio Basco thought he would have to bury her alone, according to local media.

So 61-year-old Basco, married to Reckard for more than two decades and with no family of his own, asked the funeral home to post the memorial arrangements publicly.

An outpouring of some 10,000 messages and more than 900 floral arrangements, some from as far away as Asia, came flooding in, according to The New York Times.

And on Friday afternoon some 700 people — in a line that stretched down the street — waited in almost 100-degree Fahrenheit (38-degree Celsius) heat, according to US media, to pay their respects.

The standing-room-only service, which included a mariachi band and singing, was held in a hall overflowing with floral arrangements.

“This is incredible,” said Basco, who wept as he greeted well-wishers, in video posted by local media.

He has been leaving flowers every day at a victims’ memorial outside the Walmart store where the shooting took place, media reported.

While some of the attendees had traveled from other towns or even states for the service, many were community members shaken by the act of mass violence that thrust their city into the national spotlight.

Although Basco and Reckard had no children, her offspring from a previous marriage had come to the ceremony, according to US media.

Reckard will be buried at 9:00 am local time Saturday at Restlawn Cemetery in El Paso.

Prior to the shooting, the 21-year-old gunman who carried out the attack posted a white supremacist manifesto online denouncing a “Hispanic invasion” of Texas.

El Paso lies on the Rio Grande River which marks the US border with Mexico. It has a population of 680,000, of which 83 percent are of Hispanic descent.

The shooting came hours before a gunman in Dayton, Ohio, killed nine people, reigniting calls for gun control in the US.

Firearms were linked to nearly 40,000 deaths in the United States in 2017, according to the Centers for Disease Control and Prevention.