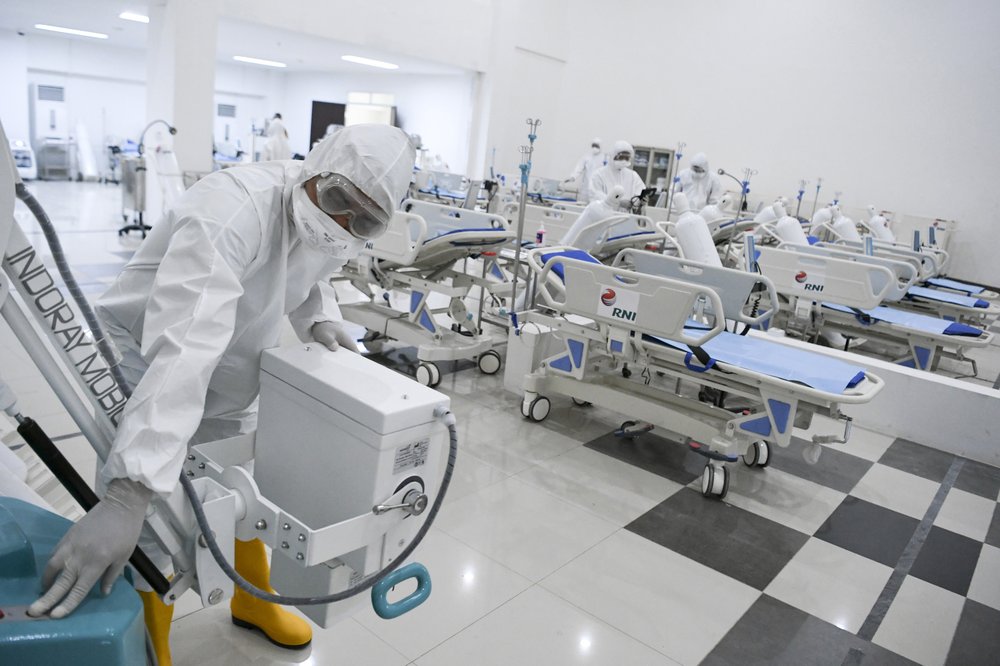 PARIS (AP) — The hunt for ventilators and other medical supplies consumed the US and Europe on Monday, as new coronavirus infections soared and political paralysis stalled efforts for a quick aid package from Congress. Asian markets and US futures sank as more governments tightened restrictions to fight the pandemic.

Fears grew that densely crowded New York could become one of the world’s biggest coronavirus hot spots, prompting cancelations of everything from play dates to picnics in the park to pickup basketball games. The city’s mayor said hospitals were 10 days away from shortages in “really basic supplies” that seriously endangered both health care workers and patients.

A surge in infections has caused a critical shortage of medical supplies in many places. Italy has already seen 18 doctors with coronavirus die and Spain says 12% of its nearly 29,000 cases are medical workers.

“There’s a wild race to get surgical masks,” François Blanchecott, a biologist on the front lines of testing, told France Inter radio. “We’re asking mayors’ offices, industries, any enterprises that might have a store of masks.”

Health care workers say they are being asked to reuse and ration disposable masks and gloves. A shortage of ventilators, crucial for treating serious cases of the virus, has become critical. A political battle over ventilators has emerged, especially after Trump told state governors to go find their own medical equipment and some replied that was not the best solution.

China has been the one nation to counter this trend, sending planeloads of medical equipment like masks, gloves and protective gear as well as doctors to countries across Europe, including hard-hit Italy, France and Spain as well as countries with weaker medical systems like Bulgaria, Greece and Serbia.

Dr. Anthony Fauci, director of the US National Institute of Allergy and Infectious Diseases, promised over the weekend that medical supplies are about to start pouring in and will be “clearly directed to those hot spots that need it most.”

But efforts for a quick aid package from Congress faltered. The US Senate voted against advancing a nearly two trillion dollar economic rescue package. Democrats argued it was tilted toward corporations rather than workers and health care providers. Another vote was expected Monday.

The delay shook investors, as has the accumulation of canceled events large and small, the soaring numbers of unemployed and a widespread shrinking in spending.

“The US is completely wasting the precious time that China has won for the world,” said Geng Shuang, the Chinese Foreign Ministry spokesman.

Markets reopened to an altered business landscape as lockdowns and closures intended to halt the spread of the new coronavirus expanded over the weekend to include many cities around the world and the number of people infected surged.

US futures slipped more than three percent on Monday and share benchmarks in many Asian markets logged sharp losses.

Worldwide, over 341,000 people have been infected and over 14,700 have died from the virus that first emerged in central China late last year. As cases in China ebbed, the dangers to Europe and the US have grown exponentially, although Germany on Monday cautiously reported some flattening of its infection curve. After just weeks, the US has more than 33,000 cases and more than 400 deaths.

For most people, the new coronavirus causes only mild or moderate symptoms, such as fever or coughing. But for some older adults and people with existing health problems it can cause more severe illness, including pneumonia. Some 99,000 people have recovered from COVID-19, mostly in China.

Republican Rand Paul of Kentucky became the first U.S. senator to announce he was infected. Opera superstar Plácido Domingo confirmed he has COVID-19, and German Chancellor Angela Merkel put herself into quarantine after a doctor who gave her a pneumonia vaccine tested positive.

Italy’s infections continued to spike Sunday, hitting 59,000 cases and 5,476 deaths, and India’s prime minister asked, with mixed results, his nation of 1.3 billion people to stay home. An untold number of burials are going forward around the world with nothing more than a priest, a funeral home staffer and one loved one to bear witness.

With no end in sight to the global uncertainty, Japanese Prime Minister Shinzo Abe acknowledged that a postponement of this year’s Summer Olympics could be unavoidable. Canada and Australia added to the immense pressure on Japan and Olympic organizers by suggesting they wouldn’t send athletes to Tokyo this summer.

The International Olympic Committee’s announced a plan to examine the situation over the next few weeks and make a decision that could include the option to postpone.

“If it is difficult to hold in a complete way, a decision of postponement would be unavoidable,” Abe said.

While other countries struggled to contain the virus, the central Chinese city of Wuhan, where the virus outbreak emerged and the first metropolitan area be locked down, said Monday it is now allowing residents limited movement, both within the city and out, as its months-long lockdown gradually eases.

By LORI HINNANT and FOSTER KLUG

Associated Press reporters around the world contributed to this report.

Image: Staff inspect medical equipments at an emergency hospital set up amid the new coronavirus outbreak in Jakarta, Indonesia, Monday, March 23, 2020. Indonesia has changed towers built to house athletes in the 2018 Asian Games to emergency hospitals with a 3,000-bed capacity in the country’s hard-hit capital, where new patients have surged in the past week. (Hafidz Mubarak A/Pool Photo via AP)