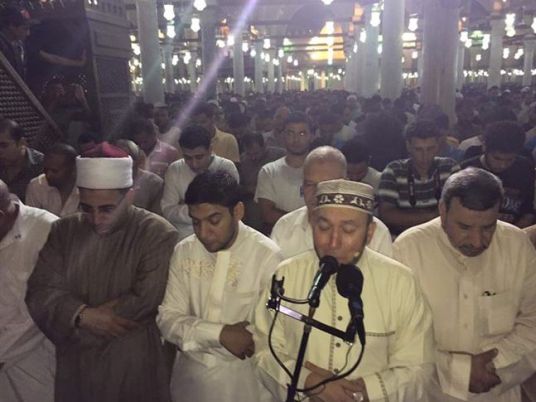 A popular Imam who, for years, used to lead a congregation of thousands in prayer during the holy month of Ramadan has been banned by the government for praying for the doom of “corrupt media and rulers”.
The Endowments Ministry, in a bid over the past two years to tighten its grip on preaching and rituals at mosques nationwide, said on Tuesday that Sheikh Mohamed Gibril had been banned from leading prayers after his supplication during the Laylat al-Qadr prayers on Monday evening carried political connotations.
Gibril “violated the ministry’s instructions” during his supplication and attempted to “politically employ the prayers and played on the public’s sentiments,” the statement said. It accused him of seeking “personal and political gain at the expense of religion”.
The ministry vowed to take “strict measures” against whomever allows Gibril to lead a prayer.
At the ancient Amr ibn Alaas Mosque in Old Cairo, one of Africa’s oldest mosques, Gibril led prayers and supplications on Monday evening during Laylat al-Qadr, Islam’s holiest night of the fasting month of Ramadan when, according to Muslim belief, prayers are answered.
“Oh God we ask you to protect us from corrupt media, and the obscurantism of rulers,” Gibril supplicated through the loudspeakers, garnering enthusiastic “Amens” from thousands of the congregants.
“Avenge us of the ruler-appeasing scholars, avenge us of the misleading media,” Gibril prayed.
Approximately 10,000 people came to pray at the ancient and tightly-guarded mosque but not all were admitted inside, prompting many to spread carpets outside the building. Hundreds of families had reserved their spot for prayer hours before the sunset fast-breaking meal.
Gibril’s prayers have apparently touched a nerve with some pro-government media hosts.
Ahmed Moussa, from the satellite channel Sada el-Balad and one of the most fervent, outspoken backers of President Abdel Fattah al-Sisi’s government, took the supplications as a direct hit against him and his colleagues, as well as the incumbent government.
“Mohamed Gibril is praying to God against us…he prayed against our homeland, ruler and officials,” Moussa said on his show Tuesday, pointing to what he described as Muslim Brotherhood-linked websites’ "jubilation" over his supplications.
“Gibril acted as the mouthpiece for the outlawed Muslim Brotherhood,” Moussa added.
The Endowments Ministry has been campaigning to clear its staff from preachers sympathizing with the Muslim Brotherhood since the ouster of former president Mohamed Morsi in 2013. It has prevented unauthorized imams from giving sermons or leading religious rituals, voicing the government's stance on countering extremist thought.
Edited translation from Al-Masry Al-Youm