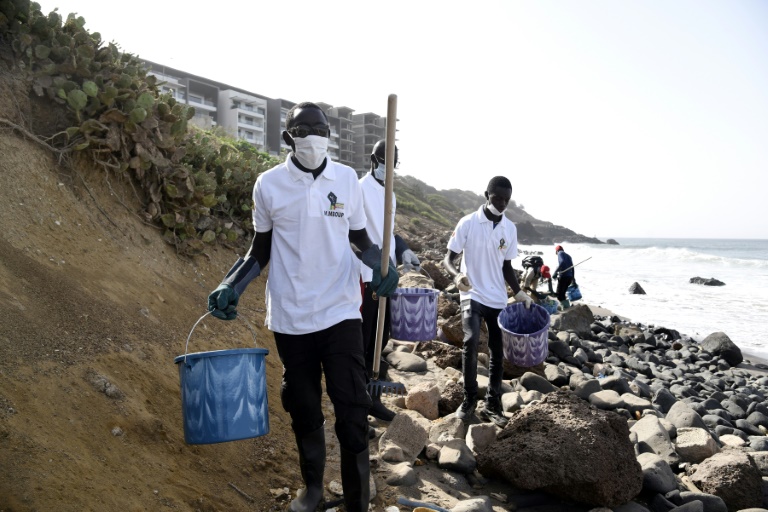 Volunteers gathered to clear a beach strewn with used compresses, dirty needles and vials of blood on Saturday, apparently discarded by nearby hospitals in Senegal’s capital Dakar.

The city beach, named Cap-Manuel, is bordered by turquoise waters on one side and construction sites on the other.

It’s a hit with locals, and children often use it as a football pitch.

But a video published by environmentalist Riad Kawar in late January provoked outcry in the West African metropolis.

It showed dozens of syringes, catheters and used medical tubes dumped on the beach.

Doctors later told Kawar that the syringes came from infectious-disease units and should have been incinerated, according to him.

“Something had to be done,” Kawar said, gazing at a group of volunteers heading towards the beach.

Some 200 volunteers of all ages and several nationalities braved the sun to remove the medical waste.

El Hadj Abdoulaye Seck, a dual French-Senegalese national on holiday in Dakar, was one of the people scouring the sands.

“This project is of capital importance,” he said with a smile, adding every citizen’s duty was to “participate in the development of our country.”

Nearby, a group of young girls combed the sand for discarded vials. “This beach is ours. We have to keep it clean for future generations,” said 25-year-old management student Nogaye Diop.

The waste was apparently thrown off a cliff overlooking the beach, which is beneath nearby hospitals.

It is unclear who is responsible for the mess.

Dibocor Sene, in charge of hygiene at one of those hospitals, said the incinerator ordinarily supposed to burn medical waste is out of order.

He added that a dedicated waste-storage room sometimes overflows too.

Local authorities have opened an investigation into the waste-strewn beach, but various actors including the city government and the ministry of health sought to shift blame when contacted by AFP.

Senegal to crack down on huge plastic waste by enforcing law