Facebook Twitter LinkedIn
ROME (AP) — When Italy won the Eurovision Song Contest with an over-the-top glam-rock performance, the victory signaled more than just a psychological boost for one of the countries hardest hit by COVID-19: Held before a live, indoor audience of 3,500, the annual kitsch fest confirmed that Europe was returning to a semblance of normalcy that was unthinkable even a few weeks ago.

Coronavirus infections, hospitalizations and deaths are plummeting across the continent, after Europe led the world in new cases last fall and winter in waves that cost hundreds of thousands of lives, forced more rolling lockdowns and overwhelmed intensive care units.

Now, vaccination rates are accelerating across Europe, and with them, the promise of summer vacations on Ibiza, Crete or Corsica. There are hopes for a rebirth of a tourism industry that in Spain and Italy alone accounts for 13% of gross domestic product but was wiped out by the pandemic.

“We don’t speak of 2020. We speak of from today onward,” said Guglielmo Miani, president of Milan’s Montenapoleone luxury shopping district, where European and American tourists have started trickling back, wooed in part by in-person meetups with design teams and free breakfasts at iconic cafes. The hope is that Asian tourists will follow next year. 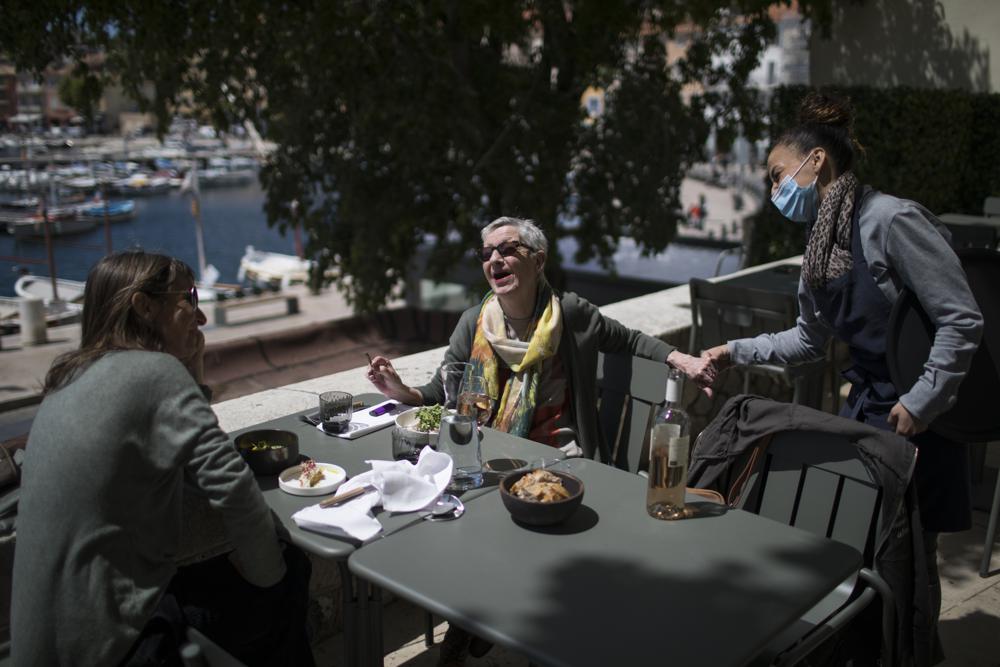 Dany Barrau reacts with a waitress after being served, at a restaurant terrace in La Ciotat southern France. (AP Photo/Daniel Cole, File)

Europe saw the largest decline in new COVID-19 infections and deaths this week compared with any other region, while also reporting about 44% of adults had received at least one dose of vaccine, according to the World Health Organization and European Centre for Disease Prevention and Control.

Europe’s seven-day rolling average for new cases per 100,000 people had been higher than any other region from mid-October through the beginning of December, ceding the unwanted top spot to the Americas over the new year before reclaiming it from early February through April, according to an Associated Press analysis of data from Johns Hopkins University.

Now, no European country is among the top 10 for new cases per 100,000 people. And only Georgia, Lithuania and Sweden are in the top 20.

But the virus is spiking in Southeast Asia and much of Latin America and hitting the Maldives and Seychelles particularly hard this week. Dr. Michael Ryan, WHO’s chief of emergencies, warned that with the global situation still “fragile and volatile,” Europe is by no means out of the woods.

“Relaxing measures prematurely has contributed to the surge we have seen throughout 2020 and during the first quarter of 2021,” he warned. “We must stay the course while striving to increase vaccination coverage.”

The biggest concern for Europe is the highly contagious variant first detected in India, which has brought that country to its knees and found a growing foothold in Britain. The British government warned Thursday that the variant from India accounts for 50 percent to 75 percent of all new infections and could delay its plans to lift remaining social restrictions on June 21. 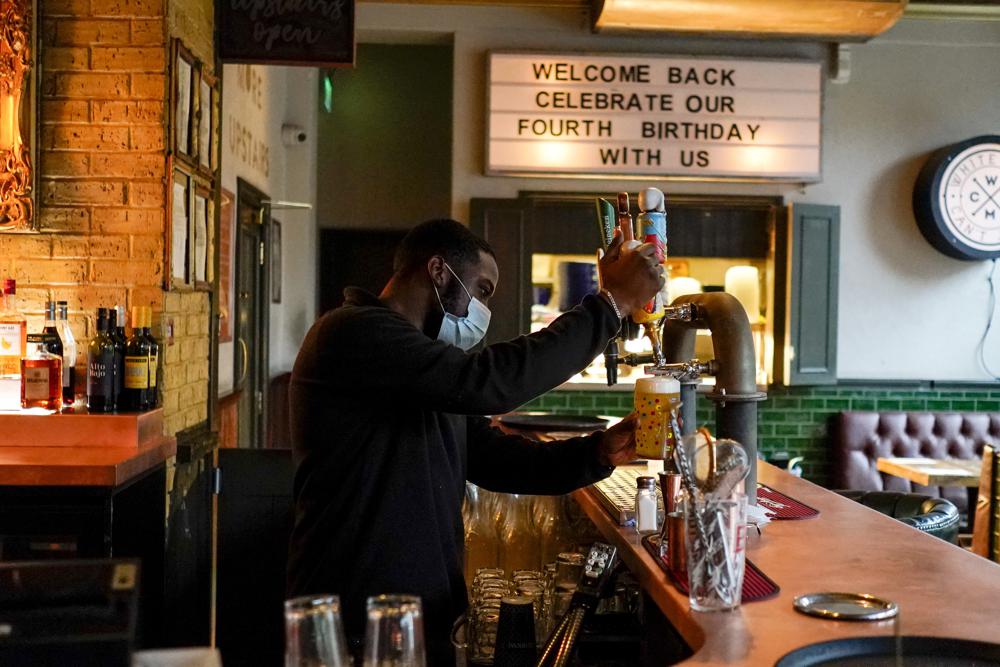 A bartender pours a pint of beer at the Prince of Peckham pub, as it reopens to indoor customers, in London. (AP Photo/Alberto Pezzali, File)

“If we’ve learned anything about this virus, it’s that once it starts to spread beyond a few cases, it becomes very difficult to contain,” said Lawrence Young, a virologist at the University of Warwick. “Only extremely stringent local lockdowns soon after a few cases are detected will prevent the virus from spreading.”

Rising British cases linked to the variant prompted Germany and France this week to require U.K. passengers to quarantine.

Vaccines appear still to be highly effective against the variant detected in India, but it is important for people to get both doses to ensure full immunity, said Ravindra Gupta, professor of clinical microbiology at the University of Cambridge.

“In populations where there’s partial immunity, either from previous infection or low levels of antibody (from a single shot), then the virus will have that nice sort of sweet spot of an advantage of immune evasion, plus greater transmission,” he said. 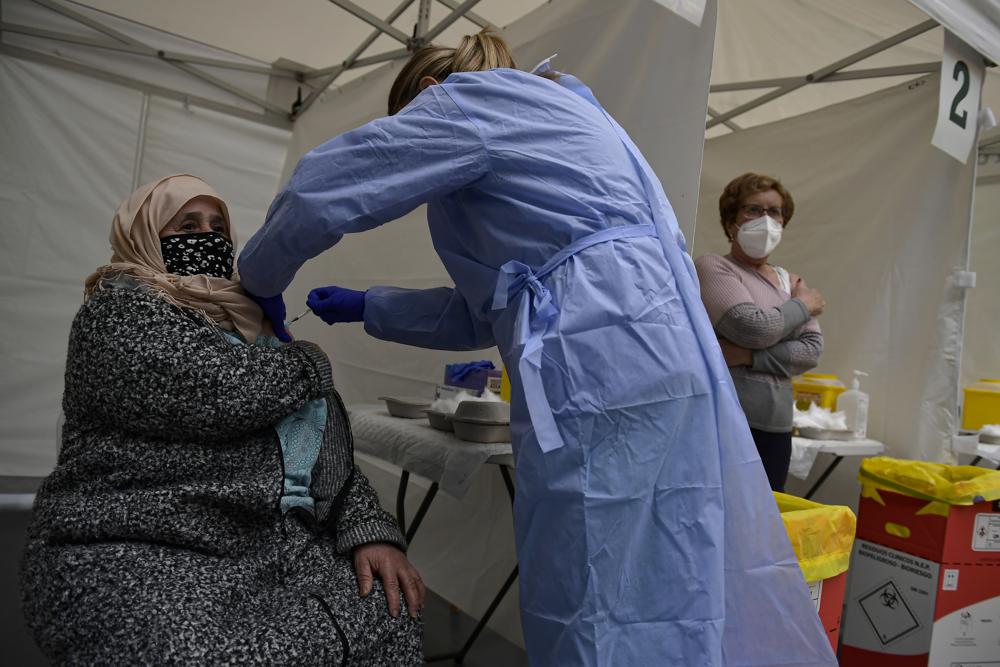 But that hasn’t stopped countries from trying to woo back tourists, even from Britain.

At least 12,000 people from Britain began descending Friday on Porto, Portugal, for the Champions League final between Manchester City and Chelsea. Visitors have to show a negative COVID-19 test to get into the stadium for Saturday’s match, but no quarantines are required on either end of the trip.

“Luckily I’ve had two vaccines,” said Casper Glyn, a 51-year-old lawyer from London who came to Porto to cheer on Chelsea with his two young sons. “They are young and healthy, so I feel good.”

On Monday, Spain lifted entry requirements — including the need for a negative virus test — for visitors from 10 countries, including the U.K. British travelers are highly sought after at Spanish beach resorts because they tend to spend the most.

Spain lifted the measures after its two-week contagion rate dropped below 130 new infections per 100,000 people, down from a record of 900 at the end of January. 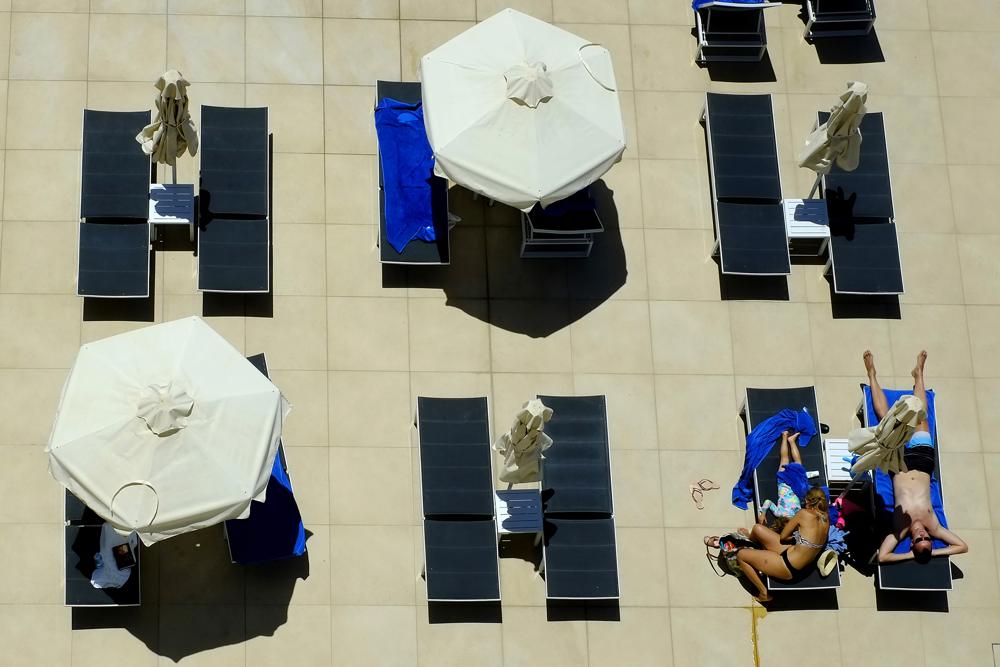 A family on vacations lounges at the pool of Nissi Blue hotel in southeast resort of Ayia Napa, in the eastern Mediterranean island of Cyprus.(AP Photo/Petros Karadjias)

Fernando Simón, head of Spain’s health emergency coordination center, said he would prefer authorities “shouted that Spain is open to tourism in 20 days, not now, when we still need to be cautious.”

“I think we should lower the tone of euphoria a little,” he said.

Greece, too, was voicing caution even after it recently allowed domestic travel and reopened most economic activity. About a third of the Greek population has received at least one vaccine dose, but new infections and deaths remain high.

“Yes, hospitalizations are dropping, yes, deaths and intubations are down, (but) there are still people entering hospital who could have been vaccinated and weren’t,” Prime Minister Kyriakos Mitsotakis said, encouraging Greeks to get their shots.

“And some, unfortunately, are losing their lives. It’s a tragedy,” he said.

But elsewhere, the euphoria is real. There is a palpable sense of relief and hope as summer approaches in Poland, where the number of new daily infections has plummeted from over 35,000 in late March and early April to lows in the few hundreds. More than 19 million vaccine doses have been administered in the nation of 38 million. 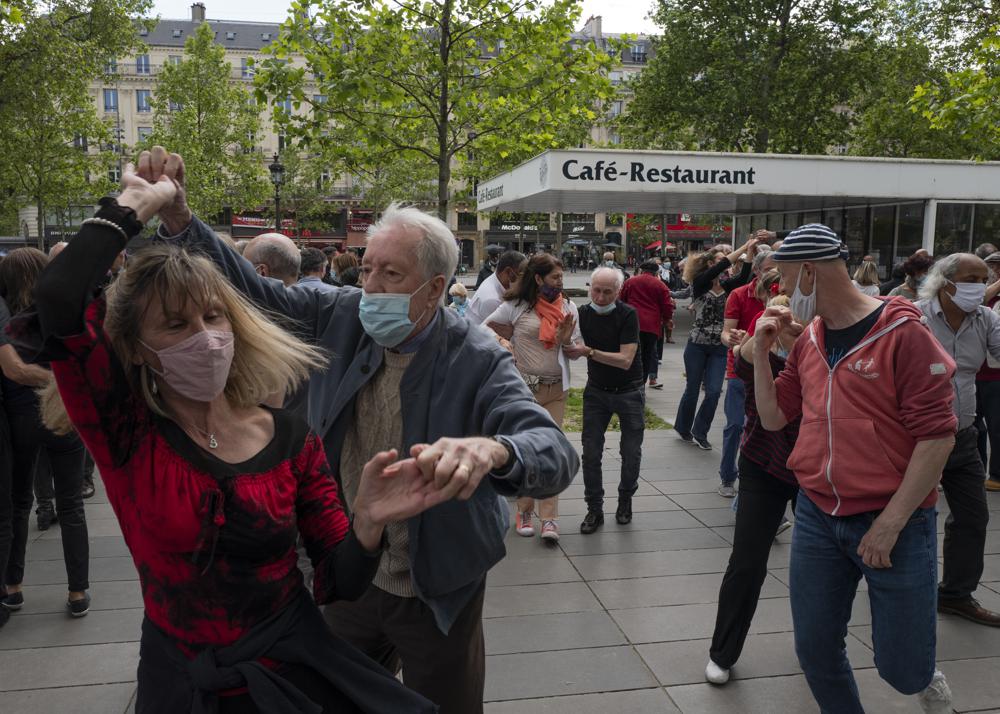 A couple with protective masks on dance at Republic square in Paris. (AP Photo/Rafael Yaghobzadeh, File)

This week, North Macedonia closed all but one of its COVID-19 treatment centers and field hospitals following a dramatic 90% decline in confirmed cases. Italy and Cyprus are due to let restaurants reopen for indoor dining on Tuesday with discos — a big summertime moneymaker for southern European beach resorts — scheduled soon thereafter.

The party was already underway in the Dutch city of Rotterdam last weekend when Maneskin — an Italian rock band that got its start singing on Rome’s central shopping street — won the Eurovision Song Contest.

“The whole event was a relief,” lead singer Damiano David said. “This Eurovision means a lot, I think, to the whole of Europe. It’s going to be a lighthouse.” 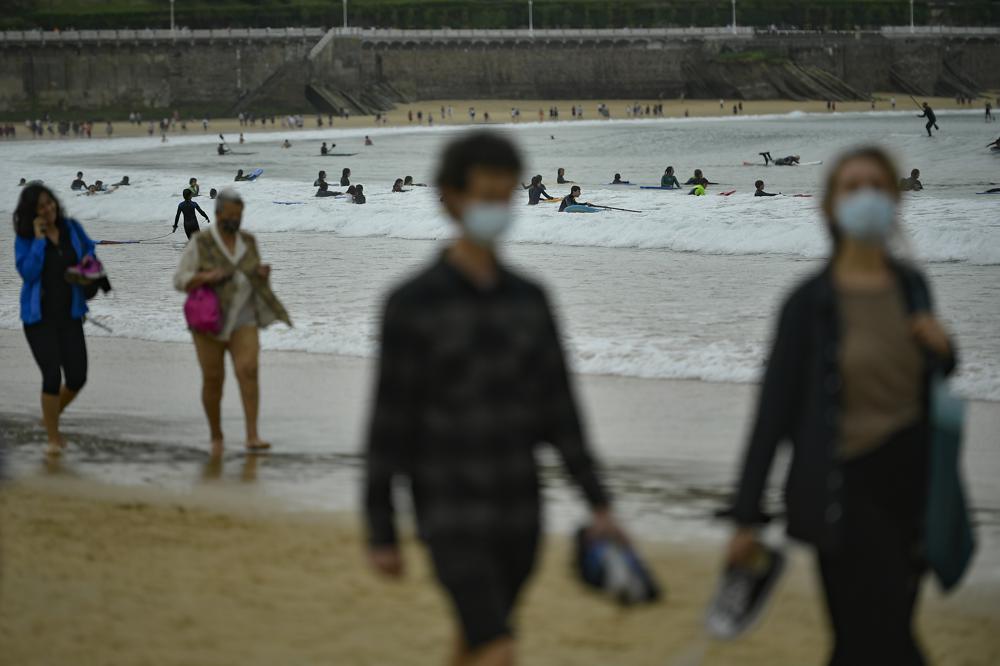