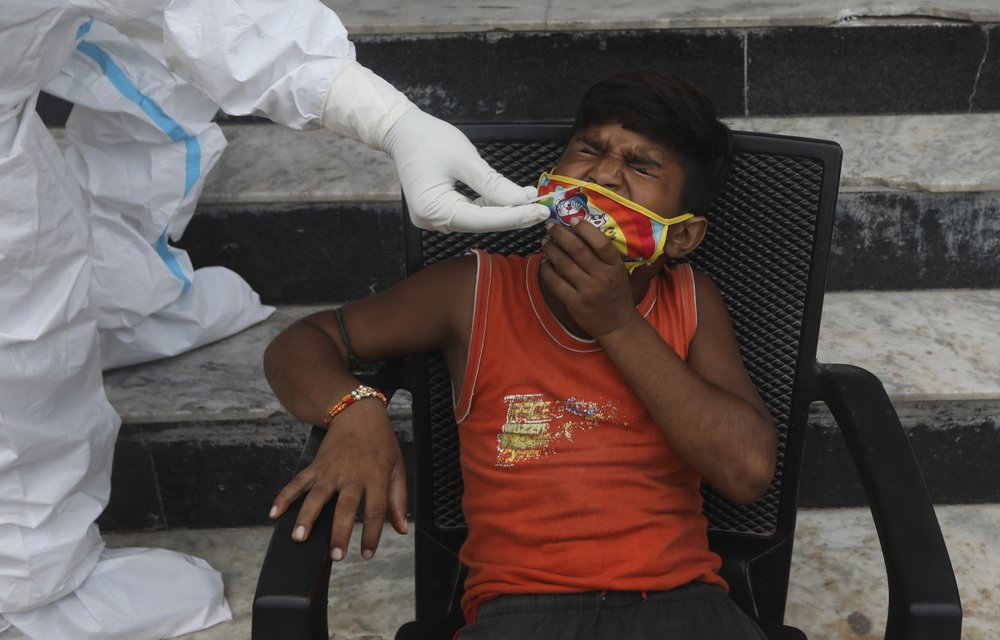 NEW DELHI (AP) — As India hit another grim milestone in the coronavirus pandemic on Friday, crossing two million cases and more than 41,000 deaths, community health volunteers went on strike complaining they were ill-equipped to respond to the wave of infection in rural areas.

Even as India has maintained comparatively low mortality rates, the disease trajectory varies widely across the country with the burden shifting from cities with relatively robust health systems to rural areas, where resources are scarce or nonexistent.

The ministry said that recoveries were also growing. India has the third-highest caseload in the world after the United States and Brazil. It has the fifth-most deaths but its fatality rate of about two percent is far lower than the top two hardest-hit countries. The rate in the US is 3.3 percent, and in Brazil 3.4 percent, Johns Hopkins University figures showed.

The caseload in the world’s second-most populous country has quickly expanded since the government began lifting a monthslong lockdown hoping to jump-start a moribund economy. India is projecting negative economic growth in 2020.

Life cautiously returned to the streets of the capital of New Delhi and financial hub Mumbai, which appear to have passed their peaks.

In Mayur Vihar, a neighborhood in east Delhi, shopkeeper and chemist Rajiv Singhal described the daily phone calls he received when he tested positive for COVID-19 from officials within the Delhi state government, the Delhi police and the federal government to check on his condition.

“Despite our huge population and rampant illiteracy, if we have only two million cases so far, it shows that government has played a big role in reducing the spread,” he said.

But authorities elsewhere in India were reimposing lockdowns after sharp spikes in cases, including in Uttar Pradesh, a state of 220 million residents where infections in every district are weighing heavily on the fragile health system. After fully reopening in June, the state reimposed a weekend lockdown in July.

Shachindra Sharma, a 60-year-old graphic designer in the state capital of Lucknow, only leaves his house for a weekly grocery shop.

“I do not fear the disease but I do fear the government system, which has crumbled,” he said.

Around 900,000 members of an all-female community health force began a two-day strike on Friday, protesting that they were being roped in to help with contact tracing, personal hygiene drives and in quarantine centers, but weren’t given personal protective equipment or additional pay, according to organizer A.R. Sindhu.

The health workers, known as Accredited Social Health Activists, or ASHA, which means ‘hope’ in several Indian languages, have been deployed in each village on behalf of the Health Ministry. Their work ranges from escorting children to immunization clinics to counseling women on childbirth.

But while their regular work hasn’t reduced, they are increasingly being involved by state governments in the fight against the pandemic, said Sindhu.

“But ASHA workers don’t have masks or PPEs or even sanitizers,” she said.

She added that although the work has increased and become more dangerous, their salaries remain static at roughly 2,000 rupees (US$27) per month And the families of at least a dozen women who she said died from the virus didn’t receive compensation from India’s federal insurance for front-line health care workers because their deaths were not recorded as COVID-19 deaths.

Manisha Verma, a spokesperson for the Health Ministry, did not immediately respond to a request for comment.

In Mumbai, the capital of central Maharashtra state, cases had plateaued after months of steady growth. But rural parts were seeing an opposite trend.

Dr. S.P. Kalantri, the director of a hospital in the village of Sevagram in Maharashtra, about 74 kilometers (46 miles) from the city of Nagpur, said that younger people were cavalier about social distancing and masks. Fatigue and increased familiarity with the disease, which has been most fatal to Indians above the age of 60 with comorbidities, had resulted in people not being as vigilant, he said.

“Everyone thinks it won’t be them,” he said.

Like in much of the rest of the world, many Indians appeared to be counting on a therapeutic treatment or a vaccine to contain the spread of the disease.

India has launched two of the world’s dozen and a half prospective vaccines into human trials, with vaccine-maker Zydus Cadila announcing it had completed phase 1 trials of its DNA-based vaccine on Thursday.

The country will be vital to global vaccination efforts, regardless of whether its own attempts work. The world’s largest vaccine maker, the Serum Institute in the central city of Pune, has ramped up capacity to manufacture as many as a billion doses in development by AstraZeneca and the University of Oxford, which is in phase 2 trials in India and England, and phase 3 trials in Brazil and South Africa.

Researchers are hoping to launch the Oxford vaccine for emergency use by October.

Image: A child grimaces as a health worker takes a nasal swab sample for COVID- 19 testing through rapid antigen methodology, in New Delhi, India , Friday, Aug. 7, 2020. As India hit another grim milestone in the coronavirus pandemic on Friday, crossing two million cases and more than 41,000 deaths, community health volunteers went on strike complaining they were ill-equipped to respond to the wave of infection in rural areas. (AP Photo/Manish Swarup)