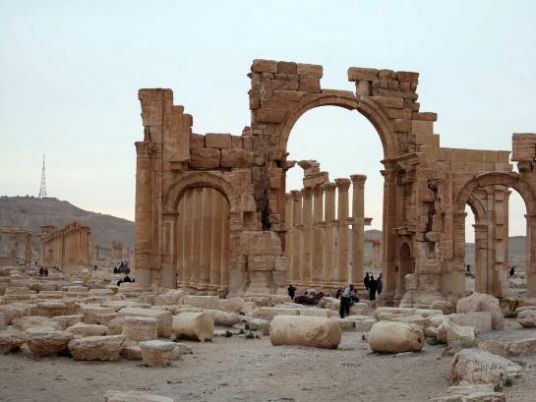 A new hi-tech front has opened in the battle to save priceless ancient monuments under threat from ISIS.
A team of archaeologists has come up with a cheap 3-D digital camera that can capture a record of buildings and artifacts — and they are sending thousands into hot spots in the Middle East and beyond.
They are enlisting the help of locals who live near monuments to snap the images, which could allow them to build replicas if they were destroyed.
"People in Syria have exactly the same cultural history as we do in New York and Boston," says Roger Michel, executive director of The Institute for Digital Archaeology, a joint venture between Harvard and Oxford Universities, which has come up with the project, "and if that gets wiped out by the sands of the desert, that's going to be a significant thing."
The institute has been working on the project for around five years, but kicked it into action early because of the rapid rate of destruction of priceless objects by ISIS.
Militants recently blew up the nearly 2,000-year-old Temple of Baalshamin in Palmyra, Syria, an act that United Nations cultural organization UNESCO called a "war crime."
A week earlier, Khaled al-As'ad, the 82-year-old former general manager for antiquities and museums in Palmyra was publicly beheaded by ISIS.
During the group's brutal and seemingly unstoppable rampage of destruction this year, militants also bulldozed the ruins of the ancient Assyrian city of Nimrud and took sledgehammers to statues in Mosul Museum.
ISIS propaganda claims they are destroying idols or false gods.
Rebuilding destruction
The 3-D images of buildings and artifacts could in future be used to build replicas of destroyed monuments, perhaps using 3-D printers, Michel says.
The database would also provide a powerful forensic tool for investigators — like the FBI, which recently asked art collectors to be on the lookout for plundered antiquities — to identify objects that have been looted by ISIS and sold into the international art market.
"Anything (ISIS) can carry away, they sell it to middlemen in Turkey and other places who are then planning down the road to pretend that some 19th century tweed-wearing gentleman archaeologist pulled these things out of Syria when he was there in 1870.
"If we have photographs of these objects in Nimrud in 2015 with GPS and time and date data stamped on them, then those objects are going to be forever unsaleable," Michel adds.
3-D camera for as little as $27
Alexy Karenowska, a physicist at the University of Oxford, designed the camera.
She describes it as "robust and relatively simple to operate" and costing around US$27 in bulk production.
"The digital technology and optics that goes into these cameras is remarkably cheap," says Karenowska. "We are capitalizing on the exponential development of digital camera technology over the past few years."
They are aiming to hand out 5,000 cameras by December this year, all equipped with lots of storage cards and batteries that can be removed and replaced.
One of the major challenges has been getting the cameras into the field.
The institute has partnered with big NGOs like UNESCO who are distributing the bulk of the cameras — the rest are going to hyperlocal networks of people working on the ground.
"They are people in local antiquary societies, local museum curators, they are embedded archaeologists, they are people just like the poor fellow who was killed in Palmyra, Mr. al-As'ad, the people that are passionate about preserving their local heritage," says Michel.
Many of the cameras will be driven in in glove boxes in cars, he adds.
Both Karenowska and Michel say keeping their operatives in the field safe is the priority.
The cameras have been designed to "not look like anything special in the event that someone were to be arrested or questioned or seized," says Michel.
But, adds, Karenowska: "The reality is that people are in and around the sites all the time, they know the territory and, I suppose, there is a quantifiable risk to everyday life there but. … We are asking locals, those who know best, to make the call."
Secrecy: An important weapon
Alongside UNESCO, the institute is compiling a hit list of monuments most at risk, which should be mapped first.
Because of the sensitive nature of the project, Karenowska is unwilling to share the names of specific monuments or locations.
"The aim is to stop our hit list becoming (ISIS') hit list. Secrecy is an important weapon," she says
Syria is one of the areas the team is looking at very closely, she added.
The project, which has an annual budget of $2.3 million, hopes to have 1 million 3-D images in the database by the end of 2016.
After that, says Michel, "we'll have to see what course the war takes, at the rate these objects are being carted off and destroyed there will not be much left to photograph."