Every night, 75-year-old Noornissa braves the freezing cold to help block one of the main roads into the capital of India, in a protest that is at the forefront of a rising challenge to Prime Minister Narendra Modi.

For nearly four weeks, Noornissa and more than 200 other women have sat and slept across the four-lane road between Delhi and the satellite city Noida, gaining nationwide attention as protests erupted across India over a controversial citizenship law that critics say is anti-Muslim.

Men stand guard as the women, from the mainly Muslim area of Shaheen Bagh, sing the US civil rights anthem “We Shall Overcome” and chant against the Citizenship Amendment Act, passed last month by Modi’s Hindu nationalist government.

The law has added to the fears of India’s 200 million Muslims. It gives Hindus, Buddhists, Sikh and other minorities who have fled neighbouring countries the right to Indian citizenship — but Muslims are excluded. Authorities have warned the Shaheen Bagh protesters that the police will clear the road if they do not leave, but the women are determined to stay (AFP / Money SHARMA)

Modi has insisted the law is “humanitarian” and that Muslims have nothing to worry about, but opponents are not convinced and have held rallies across the South Asian nation — often met with police force.

Authorities have warned the Shaheen Bagh protesters that the police will clear the road if they do not leave, but the women are determined to stay.

“I was born in India and I want to die here,” Noornissa told AFP, her frail frame shaking with emotion. “I will fight this law until my last breath.”

Gul Bano, 51, her face covered with a veil, described the protest as “a fight for our identity”.

Suffering some of the lowest temperatures in Delhi for decades, Noornissa sleeps on the street, wrapped in blankets with only her silver hair visible.

The women with her include grandmothers and younger women, many with toddlers in tow. 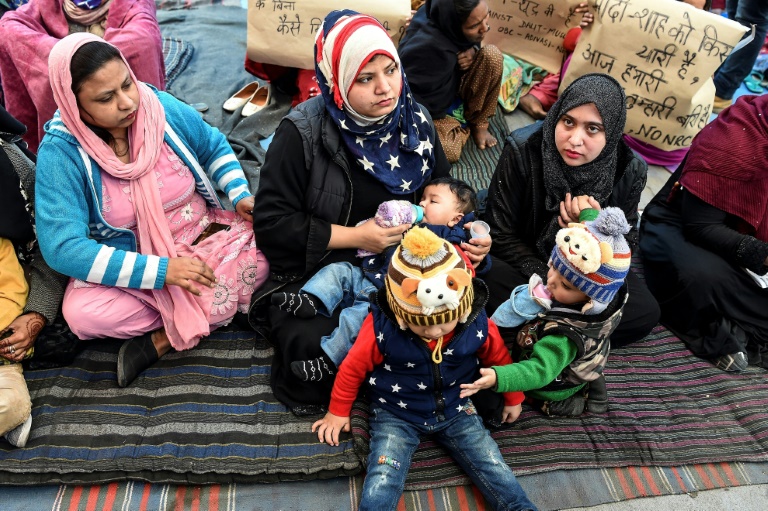 AFP / Prakash The protesters include grandmothers and younger women, many with toddlers in tow

A tent has been put up to block the wind. Stray goats walk around the road alongside the protesters (AFP / Prakash SINGH)

The Shaheen Bagh protest is a sign that “the pushback has begun across India”, according to Syeda Hameed, head of the Muslim Women’s Forum.

People bring blankets, hot tea, snacks and meals for the women. The doors of nearby homes are always open for the women if they want to use the bathroom.

Tens of thousands of people have taken part in protests against the citizenship law and more than 25 people have been killed.

Hundreds have been detained, mostly in northern Uttar Pradesh state where police have been accused of using disproportionate force against protesters. 
The Shaheen Bagh women took over the road after clashes between police and students at nearby Jamia Millia Islamia university.

Critics say the citizenship law is a precursor to a national register that many Indian Muslims fear will leave them stateless. Many poor Indians do not have documents to prove their nationality.

“We don’t trust Modi any more. He says one thing and does something else,” said Shaheen Bagh shopkeeper Jawid Iqbal.

Iqbal and other men clapped as the women read poetry and shouted “long live the revolution” from a makeshift stage.

“We salute them, especially the mothers for sticking out there with small babies,” said Nadeem Ali, watching with his six-year-old son.

Like the grandmothers, the young mums insist they will not be moved from the rugs spread on the road where they feed babies and try to get them to sleep in the cold and the din from microphones and speakers.

“I used to avoid stepping out of the house because my baby is still small but not any more,” said Samreen Sami, who is taking part with her mother and sister-in-law.

“I want to tell Modi-ji that we are not going anywhere,” she declared.

“One day you will have to listen to us and take this law back.”