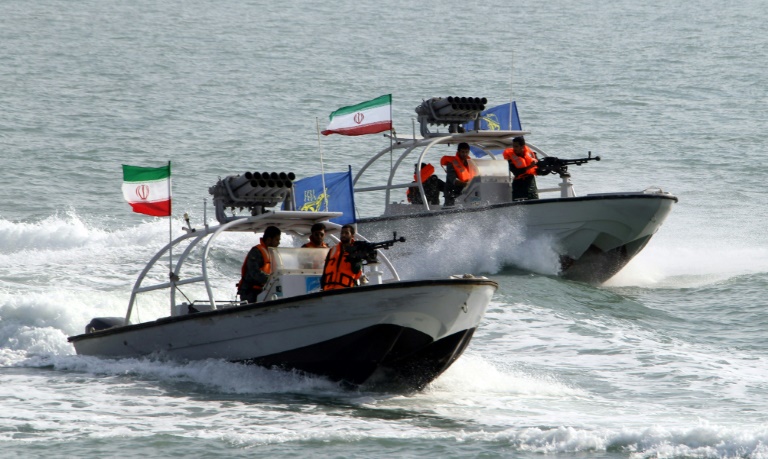 Iran’s Revolutionary Guards said Friday they had seized a British-flagged tanker in the Strait of Hormuz for breaking “international maritime rules” as tensions mount in the highly sensitive waterway.

Britain however said Iran had seized two ships in the Gulf, with Foreign Secretary Jeremy Hunt warning of “serious consequences” if the issue was not resolved quickly.

The British owner of one of the tankers, the Liberian-flagged Mesdar, said the ship had been temporarily boarded by armed personnel, but was free to leave and that all crew were “safe and well.”

The latest incidents came as President Donald Trump insisted Friday that the US military had downed an Iranian drone that was threatening an American naval vessel in the Strait of Hormuz — through which nearly a third of the world’s oil is transported — despite denials from Tehran.

Tensions in the Gulf have soared in recent weeks, with Trump calling off air strikes against Iran at the last minute in June after Tehran downed a US drone, and blaming Iran for a series of tanker attacks.

The tanker “was led to the shore and handed over to the organization to go through the legal procedure and required investigations,” it said.

The ship was transiting the Strait of Hormuz and in “international waters” when it was “attacked by unidentified small crafts and a helicopter,” the owner said.

“We are presently unable to contact the vessel which is now tracking as heading north towards Iran,” a statement said.

Hunt said he was “extremely concerned” by the seizure of the two vessels.

“We are absolutely clear that if this situation is not resolved quickly there will be serious consequences,” he told Sky News.

The incident came hours after Gibraltar’s Supreme Court said it would extend by 30 days the detention of an Iranian tanker seized two weeks ago on allegations that it was heading to Syria in violation of sanctions.

Hours before the latest incident, Iran and the United States were caught in a new war of words.

Trump on Friday reiterated a claim that Washington destroyed an Iranian drone that was threatening the USS Boxer, an amphibious assault ship in the Strait of Hormuz.

Iran denied the allegation, and deputy foreign minister Abbas Araghchi tweeted that US forces may have shot down a US drone by mistake.

The Revolutionary Guards released a video Friday which they said belies the US claims.

The seven-minute-long footage, apparently shot from high altitude, shows a convoy of ships which the Guards said they were tracking as they passed through the Strait of Hormuz.

The ships in the footage could not be immediately identified, although one was similar to the USS Boxer.

Earlier a US official said Washington has “very clear evidence” that it downed the drone, but gave no details.

Suzanne Maloney, an Iran expert at the Brookings Institution, said the recent events involving Tehran are “the exact opposite of odd.”

“This is precisely how Iran negotiates: the unctuous charm of (Foreign Minister Mohammad Javad) Zarif paired with a punch in the face from the (Revolutionary Guards). They are two sides of the same coin, complementary and coordinated.”

As tensions soared, Tehran’s arch rival Saudi Arabia announced Friday that it would once again host US troops on its soil to boost regional security.

The Pentagon said the deployment “ensures our ability to defend our forces and interests in the region from emergent, credible threats.”

The US military also said it had patrol aircraft monitoring the Strait of Hormuz, and was developing a “multinational maritime effort” dubbed Operation Sentinel to increase surveillance and security in key Middle East waterways.

The operation will “enable freedom of navigation in the region and protect vital shipping lanes,” US Central Command said in a statement.

The latest escalation comes more than a year after Washington unilaterally withdrew from the 2015 Iran nuclear agreement and began ratcheting up sanctions against Tehran.

On Friday Trump spoke with French leader Emmanuel Macron, the White House said, with the leaders discussing “ongoing efforts to ensure Iran does not obtain a nuclear weapon.”

Earlier this month, Iran purposely overshot the deal’s caps on uranium enrichment, aiming to pressure the remaining parties to make good on their promises to help prop up its economy.

Iran has repeatedly threatened to close the Strait of Hormuz if attacked.