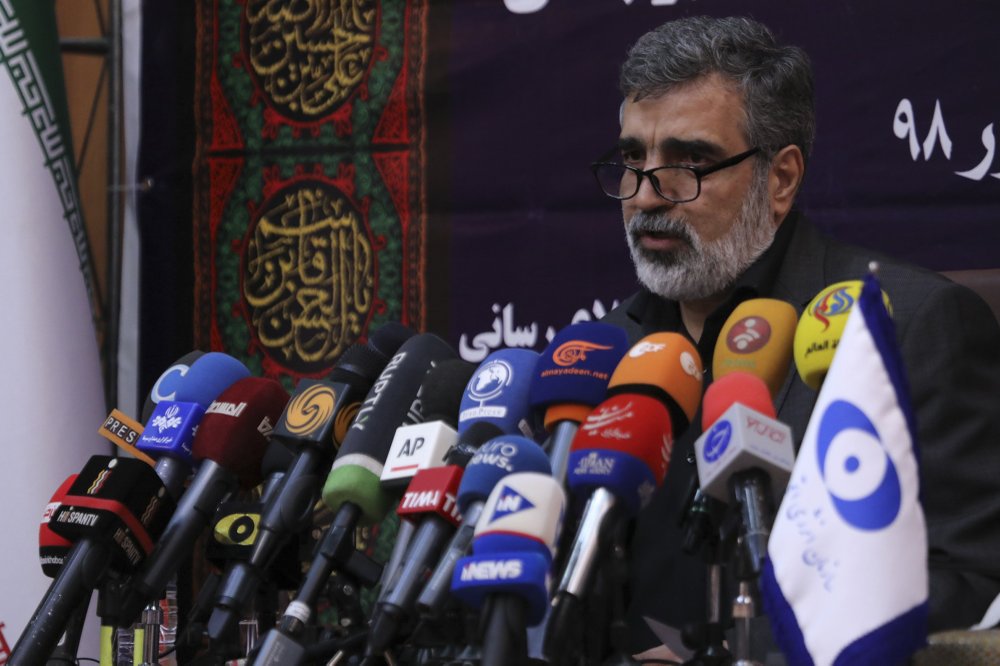 TEHRAN, Iran (AP) — Iran has begun using arrays of advanced centrifuges to enrich uranium in violation of its 2015 nuclear deal, a spokesman said Saturday, warning that Europe has little time left to offer new terms to save the accord.

The comments by Behrouz Kamalvandi of the Atomic Energy Organization of Iran signal a further cut into the one year experts estimate Tehran would need to have a enough material for building a nuclear weapon if it chose to pursue one. Iran maintains its program is peaceful.

Iran already has breached the stockpile and enrichment level limits set by the deal, while stressing it could quickly revert back to the terms of the accord if Europe finds a way for it to sell its crude oil abroad despite crushing US sanctions. However, questions likely will grow in Europe over Iran’s intentions as satellite photos obtained by The Associated Press on Saturday showed an once-detained oil tanker Tehran reportedly promised wouldn’t go to Syria was off its coast.

Tensions between Iran and the US have risen in recent months, with mysterious attacks on oil tankers near the Strait of Hormuz, Iran shooting down a US military surveillance drone, and other incidents across the wider Middle East. Iran separately seized another ship and detained 12 Filipino crewmembers, a semi-official news agency reported Saturday.

“Our stockpile is quickly increasing,” Kamalvandi warned in a news conference. “We hope they will come to their senses.”

The accord saw Iran limits its enrichment of uranium in exchange for sanctions relief. Among the limitations was a requirement that Iran use only 5,060 first-generation IR-1 centrifuges. A centrifuge is a device that enriches uranium by rapidly spinning uranium hexafluoride gas.

Today, Iran has begun using an array of 20 IR-6 centrifuges and another 20 of IR-4 centrifuges, Kamalvandi said. An IR-6 can produce enriched uranium 10 times as fast as an IR-1, Iranian officials say, while an IR-4 produces five times as fast.

Iran already has increased its enrichment up to 4.5 percent, above the 3.67 percent allowed under the deal. Using advanced centrifuges means a shorter time would be needed to push up its enrichment.

While Kamalvandi stressed that “the Islamic Republic is not after the bomb,” he warned that Iran was running out of ways to stay in the accord.

“If Europeans want to make any decision, they should do it soon,” he said.

Kamalvandi also said Iran would allow UN inspectors to continue to monitor sites in the country. A top official from the UN’s International Atomic Energy Agency was expected to meet with Iranian officials in Tehran on Sunday.

The IAEA said Saturday it was aware of Iran’s announcement and “agency inspectors are on the ground in Iran and they will report any relevant activities to IAEA headquarters in Vienna.”

Kamalvandi made the remarks in a news conference carried on live television. He spoke from a podium with advanced centrifuges standing next to him.

“The Iranians are going to pursue what the Iranians have always intended to pursue,” Esper said at a news conference with his French counterpart, Florence Parly.

Meanwhile Saturday, satellite images showed a once-detained Iranian oil tanker pursued by the US appears to be off the coast of Syria, where Tehran reportedly promised the vessel would not go when authorities in Gibraltar agreed to release it several weeks ago. Iran later seized a British-flagged oil tanker which it still holds.

The tanker Adrian Darya-1, formerly known as the Grace-1, turned off its Automatic Identification System late Monday, leading to speculation it would be heading to Syria. Other Iranian oil tankers have similarly turned off their tracking beacons in the area, with analysts saying they believe crude oil ends up in Syria in support of embattled President Bashar Assad’s government.

Images obtained by The Associated Press early Saturday from Maxar Technologies appeared to show the vessel off Syria’s coast, some 2 nautical miles (3.7 kilometers) off shore under intermittent cloud cover.

Iranian and Syrian officials have not acknowledged the vessel’s presence there. There was no immediate report in Iranian state media about the ship, though authorities earlier said the 2.1 million barrels of crude oil onboard had been sold to an unnamed buyer.

The oil on board would be worth about $130 million on the global market, but it remains unclear who would buy the oil as they’d face the threat of US sanctions.

“Anyone who said the Adrian Darya-1 wasn’t headed to #Syria is in denial,” Bolton tweeted. “We can talk, but #Iran’s not getting any sanctions relief until it stops lying and spreading terror!”

US prosecutors in federal court allege the Adrian Darya’s owner is Iran’s Revolutionary Guard, which answers only to Supreme Leader Ayatollah Ali Khamenei. On Wednesday, the US imposed new sanctions on an oil shipping network it alleged had ties to the Guard and offered up to $15 million for anyone with information that disrupts its paramilitary operations.

Brian Hook, the US special envoy for Iran, also has reportedly emailed or texted captains of Iranian oil tankers, trying to scare them into not delivering their cargo.

Meanwhile, the US Transportation Department’s Maritime Administration issued on Saturday a new warning to shippers about a potential threat off the coast of Yemen in the southern Red Sea.

“A maritime threat has been reported in the Red Sea in the vicinity of Yemen,” the warning read. “The nature of the event is potential increased hostilities that threaten maritime security.”

Large areas of war-torn Yemen are held by the country’s Huthi rebels, which are allied to Iran. Shipping in the Red Sea has been targeted previously by rebel attacks. On Wednesday, a warning went out after two small boats followed one ship in the region, but there’s been no other information about a new threat there.

Cmdr. Joshua Frey, a spokesman for the US Navy’s Bahrain-based 5th Fleet, said the Navy remained ready to maintain the safety of shippers in the region.

Separately Saturday, the semi-official ISNA news agency said Iran seized a tugboat and its crew of 12 Filipinos near the Strait of Hormuz on suspicion of smuggling diesel fuel. The report did not elaborate. Frey said the US Navy was aware of the report, but declined to comment further.

By By NASSER KARIMI and JON GAMBRELL. Gambrell reported from Dubai, United Arab Emirates. Associated Press writers Robert Burns in Paris and David Rising in Berlin contributed to this report.

Iran ratchets up pressure ahead of weekend nuclear deadline

Iran oil tanker pursued by US turns off tracker near Syria