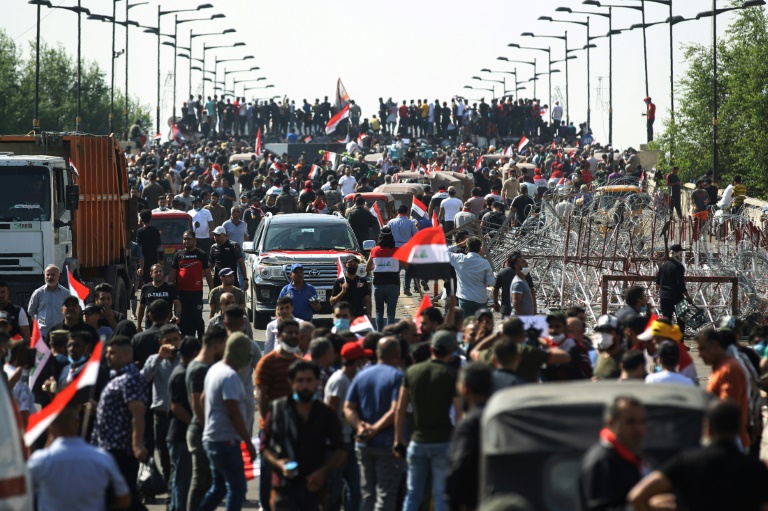 Iraqi security forces sought to clamp down on protests in Baghdad and across the south on Saturday, a day after dozens died in a bloody resumption of anti-government rallies.

A parliamentary session scheduled for Saturday afternoon to discuss the renewed protests was cancelled after it failed to reach a quorum.

Since anti-government rallies first erupted on October 1, nearly 200 people have died and thousands were wounded in Baghdad and across the country’s Shiite-majority south in violence condemned worldwide.

Almost a quarter of them, 42, succumbed on Friday alone from live rounds, tear gas canisters or while torching government buildings or offices belonging to powerful Hashed al-Shaabi paramilitary factions in several southern cities.

Tensions remained high across several cities there on Saturday, with security forces cutting off roads and imposing strict curfews.

The storming of provincial headquarters, parliamentarians’ workspaces or Hashed offices marks a new phase in the southern rallies but there have been no such incidents so far in the capital.

In Baghdad, a few hundred protesters dug in around the emblematic Tahrir (Liberation) Square on Saturday morning despite efforts by riot police to clear them with tear gas.

“It’s enough — theft, looting, gangs, mafias, deep state, whatever. Get out! Let us see a (functioning) state,” said one protester, referring to perceived cronyism and corruption in the country.

“We don’t want anything, just let us live,” he added as puffs of smoke from tear gas rose behind him.

Oil-rich Iraq is OPEC’s second-highest producer — but one in five people live below the poverty line and youth unemployment sits at 25 percent, according to the World Bank.

The staggering rates of joblessness and allegations of corruption sparked the widespread protests on October 1 and the government has struggled to quell public anger by proposing reforms.

New education and health ministers were approved by parliament in a session earlier this month, the only time it was able to reach a quorum since protests began.

“They told young people: ‘go home, we’ll give you pensions and come up with a solution’. They tricked us,” said one of the rare woman protesters on Saturday, her young son at her side.

About 60 percent of Iraq’s 40-million-strong population is under the age of 25.

Protesters have directed some of their anger at the country’s top Shiite religious authority, Grand Ayatollah Ali al-Sistani, who is deeply revered among most Iraqis.

Others have been waiting for signal from influential populist cleric Moqtada al-Sadr, who has thrown his weight behind protests.

“Sadr, Sistani — this is a shame,” a protester in Tahrir said on Saturday.

Riot police had been trying to keep protesters around Tahrir from reaching the high-security Green Zone across the river, which hosts government offices including parliament.

Speaker Mohammed al-Halbusi said he had visited Tahrir overnight, but many demonstrators have shunned the participation of mainstream politicians whom they see as trying to co-opt their movement.

A few dozen people in Babylon, south of Baghdad, gathered for a sit-in on Saturday despite a curfew.

But in the southern port city of Basra, protesters failed to come out in large numbers after security forces imposed a strict curfew.

In Diwaniyah, too, security forces sealed off roads ahead of planned protests later on Saturday afternoon.

Late Friday, 12 protesters died in Diwaniyah alone while setting fire to the headquarters of the powerful Badr organization.

“Public anger is directed at them in addition to governorate councils, for they were the obvious face of ‘the regime’,” wrote Harith Hasan, a senior fellow at the Carnegie Middle East Center.

But it was also a chance for Sadr to swipe at his rivals in the Hashed.

“The Sadrists, especially in their traditional strongholds such as Missan, saw this an opportunity to act against competing militias,” such as Asaib Ahl al-Haq, Badr, and Kataeb Hezbollah, Hasan said on Twitter.

Image: AFP / – Nearly 200 people have died and thousands wounded in Iraq since anti-government protests broke out on October 1