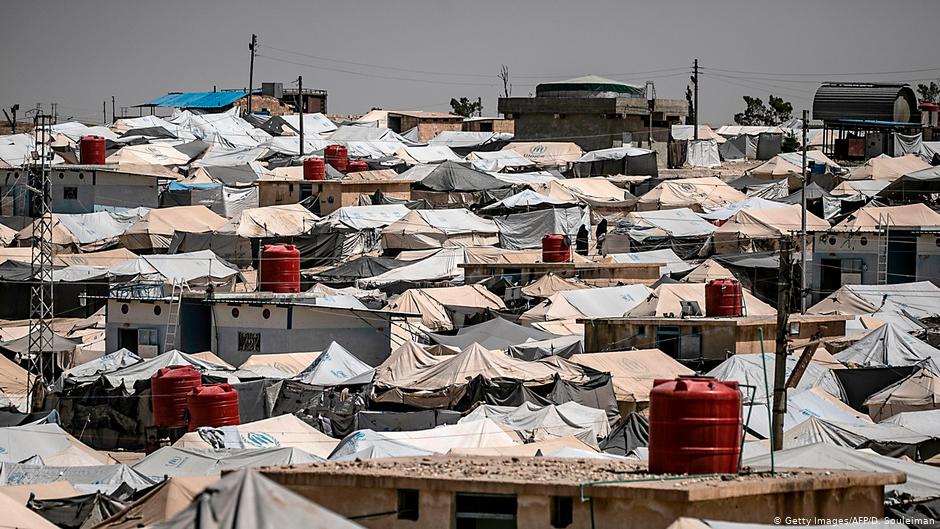 A few years ago, “Islamic State” was a powerful terrorist organization. Today, it has largely gone underground, but it continues to mobilize its followers to launch attacks.

The two women and 12 children the German Foreign Ministry recently got released from the al-Hol prison camp in northern Syria have returned to Germany. It was a humanitarian gesture from the German side. And for the Kurdish autonomous government, it means less of a burden on their security forces.

The camp houses about 64,000 people, most of them from a region once occupied by the “Islamic State” (IS) terrorist organization. Most of the detainees are Syrian and Iraqi citizens, according to a UN report. It says almost 9,500 come from elsewhere, many of them from Europe.

For months, the security authorities have demanded that the numbers in the camp be reduced, warning that numerous inmates still have extremist ideas and pose a potential threat. If these individuals were able to escape during an insurgency, they would immediately rejoin IS or other jihadi groups, they argue.

Weakened but not broken

If potential terrorists managed to rejoin IS, however, they would find an organization that is only a shadow of its former self. The aura of its earlier years is gone; it does not have the organizational or symbolic momentum it had before it was defeated in 2017/18.

IS is significantly weakened compared to five years ago, said Peter Neumann, professor of security studies at King’s College London. The idea of the “caliphate” proclaimed in 2014 no longer holds any fascination, he told DW, adding that IS is closely monitored, especially in Iraq.

“There is enormous pressure there, which makes it difficult for it to organize itself, to get hold of new weapons and to recruit new members,” Neumann said. “All of this weakens the movement enormously in its countries of origin — Iraq and Syria.”

Jassim Mohamad, a terrorism researcher who runs the www.europarabct.com website, comes to a similar conclusion.

“Some estimates from inside Iraqi government said that there are about 3,500 fighters in Iraq and perhaps 4,000 fighters in Syria,” he told DW. “If we talk about ISIS in Iraq, there is a significant decline in the size of the organization and the organization’s operations after ISIS lost its strongholds in Syria and Iraq,” he said, using another acronym for IS.

“The operations of ISIS in Iraq and Syria have retreated, and it is no longer able to carry out specific operations,” he added.

IS is trying to obtain weapons, Mohamad said, adding that the information “received from inside Iraqi government reveals that the organization has only light weapons and does not possess medium or heavy weapons.”

“It is expected that ISIS lost its network of relations and financial sources around the world,” he said.

If IS decides to carry out specific operations, they are limited, he added, saying they are as a rule carried out by “mobile groups that do not exceed 10 people,” mostly in distant regions or far from cities. Generally, he said, their activities are restricted to rapid actions such as blocking roads or attacking border military sites.

As the group’s financial transactions are also being monitored more closely, its economic capabilities are also very limited, he said, adding that this has led to a decline in IS operations around the world.

There is no reason to sound the all-clear, however, said Neumann — IS is still active in Europe, although it has changed its tactics. It is currently not in a position to carry out large-scale operations or to rely on members with combat experience as it did a few years ago. Instead, Europe has seen smaller attacks by individuals, including in Paris, Nice, Vienna and Dresden.

“In this way, IS wants to show that it is still present and can still strike,” he said. “It seeks new motives for mobilization, for instance, the debate about the Muhammad cartoons.”

Its recruitment drive is based on simple elements. A few videos with suggestive image sequences and solemn music are often enough to win over followers. This kind of cyber recruitment is even simpler and often more effective than efforts made by schools of Islamic theology and extremist groups often found in the vicinity of mosques, headed by radical preachers. On a digital level, radicalization often goes unnoticed.

Present in Africa, too

The organization is present especially in West Africa and North Africa, taking advantage of the chaos in Libya, said Jassim Mohamad.

In addition to ideological mobilization, the IS is primarily concerned with expanding smuggling routes to sub-Saharan Africa, he said.

Al-Qaida currently still has a greater influence in the region, Mohamad said, but “overall, however, terrorist activity in West Africa can be expected to increase despite the efforts being made.”

IMAGE: The al-Hol refugee camp is a hotbed of potential jihadis – Delil Souleiman/AFP