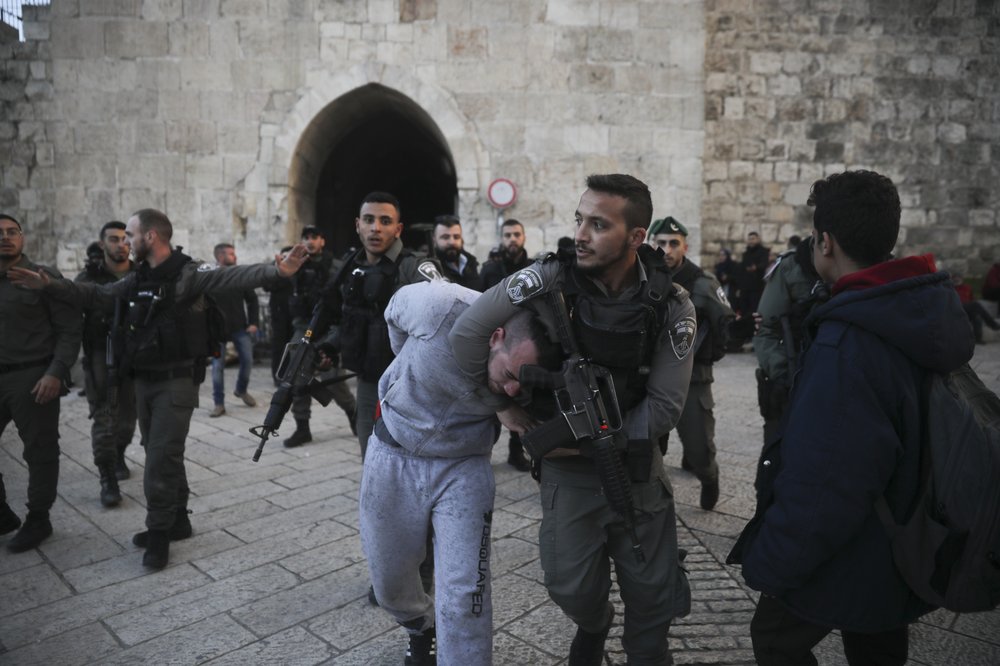 Netanyahu had said the Cabinet would vote Sunday on extending Israeli sovereignty to dozens of Jewish settlements as well as the Jordan Valley, a move that risks provoking a harsh backlash from the Palestinians and the international community.

But he appears to have put annexation on hold to explore the legal ramifications and to coordinate it with the United States.

Tourism Minister Yariv Levin told Israel Radio that a Cabinet vote on annexing territories on Sunday was not technically feasible because of various preparations, including the need to consult Israel’s attorney general. Israel has not had a permanent government in a year, following two inconclusive elections, and it’s unclear if a caretaker government can embark on such a move.

David Friedman, the American ambassador to Israel, told reporters that a joint U.S.-Israeli committee would need to ensure that the extension of Israeli sovereignty matches up with a “conceptual map” released by the administration showing the borders of a future Palestinian state.

“It is a process that does require some effort, some understanding, some calibration,” he said. “I’m not going to speculate how long that will take. The president did use the word ‘immediately.’”

The Palestinians angrily rejected the Trump plan, which would allow Israel to annex all its settlements in the West Bank while giving the Palestinians limited self-rule over the Gaza Strip, chunks of the West Bank and other far-flung areas linked together by roads, bridges and tunnels. It also grants Israel virtually all of east Jerusalem, including the Old City and holy sites.

The Palestinians view the settlements in the West Bank and annexed east Jerusalem — territories seized by Israel in the 1967 war — as a major obstacle to peace. That position is held by much of the international community, which views the settlements as illegal.

Levin, a senior member of Netanyahu’s hawkish Likud party, appeared to acknowledge that almost none of the Palestinians’ demands are met in the Trump plan. He said the Palestinian state it envisions is “roughly the same Palestinian Authority that exists today, with authority to manage civil affairs,” but lacking “substantive powers” like border control or a military.

The U.S. initiative appears unlikely to lead to a negotiated solution to the decades-old conflict, but offered a boost to both Trump and Netanyahu, who are each campaigning for re-election under a cloud of allegations of wrongdoing.

Netanyahu was formally indicted on charges of bribery, fraud and breach of trust hours before the Trump initiative was announced, when he withdrew a request for immunity that was likely to be rejected by Israel’s parliament. That move cleared the way for Netanyahu to become the first sitting Israeli prime minister to face a criminal trial.

Trump, meanwhile, was impeached last year and is being tried in the Senate.

With Trump’s help, Netanyahu has largely succeeded in shifting attention from his legal woes to his vaunted diplomatic skills.

Toward that end, Netanyahu was flying from Washington to Moscow, where he is scheduled to brief President Vladimir Putin about the Trump plan. He is expected to return to Israel with a young Israeli woman who was jailed in Russia on drug charges, after Putin pardoned her. The case had attracted widespread attention in Israel, and the pardon could give Netanyahu an electoral boost.

The plan put forth by Trump is the most generous and detailed proposal ever offered to Israel, and is a hit among Netanyahu’s right-wing base as well as Trump’s evangelical Christian supporters in the United States.

But its implementation could be delayed until Israel forms a permanent government, something that has eluded its fractious political parties for the last year. Benny Gantz, a former army chief and the leading contender to replace Netanyahu, also met with Trump over the weekend and has welcomed Trump’s proposal.

Gantz announced late Wednesday that he would bring the Trump initiative before parliament for approval next week.

But while Israelis have hailed the plan, the international response has ranged from tepid shows of support to outright hostility. Trump hopes to rally Arab support for it and says “many, many” countries “want this to happen,” without naming them.

Saudi Arabia and Egypt, Arab states that are key U.S. allies, said they appreciated the administration’s efforts and called on Israel and the Palestinians to resume direct talks. But neither country has commented on the details of the plan. Jordan reaffirmed its commitment to a Palestinian state along the 1967 lines and warned against any annexation.

The head of the Arab League said Wednesday that an initial study of the plan’s 50-page political framework showed that it “ignored legitimate Palestinian rights in the territories.”

Ahmed Aboul-Gheit said the Palestinian response would be key in shaping a “collective Arab position” on the plan, which he noted was a “non-binding U.S. vision.” The Arab League plans to hold an urgent meeting Saturday on the proposal.

After attending that meeting, Palestinian President Mahmoud Abbas intends to discuss the plan at an African Union gathering and a U.N. Security Council meeting in the next two weeks, the Palestinians’ U.N. ambassador, Riyad Mansour, said Wednesday.

Turkish President Recep Tayyip Erdogan was quoted by state-run media as saying the plan amounts to a “legalization of Israel’s occupation” of Palestinian territories and “will not serve peace or a solution.”

Catholic officials in the Holy Land also rejected the initiative, saying it heavily favors Israel while failing to give dignity to the Palestinians. “This plan will bring no solution but rather will create more tensions and probably more violence and bloodshed,” they said.

Hard-line Israeli nationalists have meanwhile called for the immediate annexation of West Bank settlements ahead of the March 2 elections, the third in less than a year.

They have eagerly embraced the part of the plan that would allow Israel to annex territory but have rejected its call for a Palestinian state.

“That which is postponed to after the elections will never happen,” Israeli Defense Minister Naftali Bennett, a hard-line ally of Netanyahu, tweeted Wednesday.

“If we postpone or reduce the extension of sovereignty (in the West Bank), then the opportunity of the century will turn into the loss of the century,” he said.

Nahum Barnea, a veteran Israeli columnist, criticized the Trump plan in the Yediot Ahronot newspaper, saying it would create a Palestinian state “more meager than Andorra, more fractured than the Virgin Islands.”

He cautioned that annexation would lead to “a reality of two legal systems for two populations in the same territory — one ruling, the second occupied. In other words, an Apartheid state.”