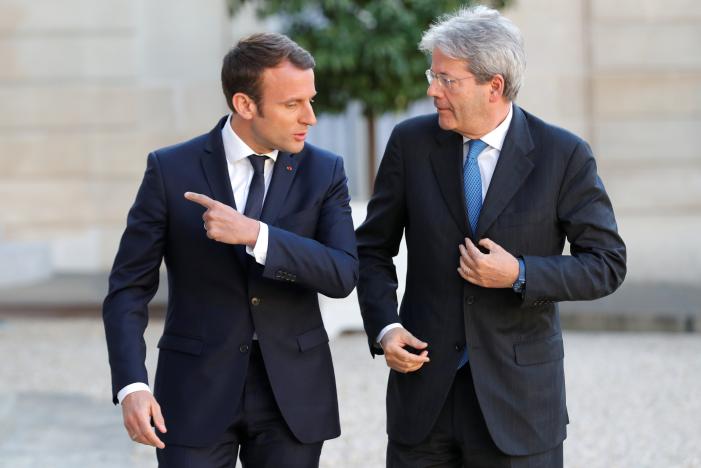 Ahead of a working dinner with visiting Italian Prime Minister Paolo Gentiloni, he repeated his wish to work quickly within the EU to strengthen rules to protect workers against social dumping and improve regulations on public procurement.

In a nod to Italy, which has received more than 45,000 people arriving by boat from North Africa so far this year alone, he said the EU also had to better share the burden of the high migration flows across the Mediterranean in recent years.

The EU has seen some 1.6 million refugees and migrants from the Middle East, Africa and beyond reach its shores in 2014-2016. Most first arrived in flimsy boats in Greece but now head mainly to Italy. Many have died at sea.

“We did not quite hear the warnings that Italy sent us,” Macron said. “I want us to address a real reform of the right of asylum and of our current regulations to better protect those countries most subject to this migratory pressure.”

Gentiloni urged the EU to draw up a common migration policy, and also called for the euro zone monetary union to move toward a fiscal and banking union.

“It won’t be a quick process but the important thing is to be able to start and to go in the right direction,” he said.

Macron’s meeting with Gentiloni comes after one with German Chancellor Angela Merkel in Berlin on Monday to draw up a roadmap for deeper EU integration.

He also met with European Council President Donald Tusk on Wednesday in Paris.