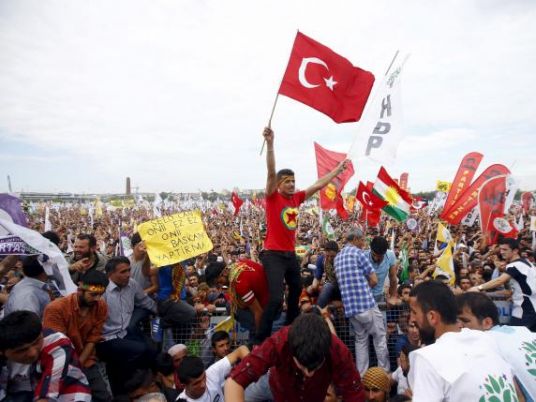 Turkey’s Kurdish opposition presidential candidate, who is challenging President Tayyip Erdogan from behind prison bars, said a fair vote in next month’s election was impossible under the state of emergency.

In his first interview with international media since being named as candidate by his Peoples Democratic Party (HDP) on Friday, Selahattin Demirtas told Reuters opposition parties will face huge obstacles campaigning for votes.

“Demonstrations are banned, talking is banned, criticizing the government is banned, even defending peace is considered terror propaganda,” he said. “Hundreds of opposition journalists are arrested, dozens of TV and radio channels are closed.

“It is impossible for there to be fair elections in such an environment,” Demirtas said in a hand-written response to questions submitted by Reuters to his lawyers.

Demirtas and the HDP face even greater challenges than other opposition parties in running against Erdogan, Turkey’s most successful modern politician. The party’s former co-leader has been in jail for a year and a half on security charges and faces up to 142 years in prison if convicted.

Announcing his candidacy on Friday, the party released images of a visibly thinner yet smiling Demirtas dressed in a white shirt and black trousers in the courtyard of his prison in the northwestern province of Edirne.

A human rights lawyer by training, he is one of Turkey’s best-known politicians, winning votes beyond his core Kurdish constituency in the 2015 election to turn the HDP into the second-largest opposition party in parliament.

Prosecutors charge that Demirtas and hundreds of other detained HDP members are tied to the militant Kurdistan Workers Party (PKK), which has waged a decades-long insurgency in Turkey’s mainly Kurdish southeast. The HDP denies the charges and Demirtas said he was unjustly jailed.

“There is no legal obstacle to my candidacy because I am not convicted,” he said, adding it would be a “scandal and a crime” if the courts blocked him by convicting him.

While the HDP commands only about 10 to 12 percent support, Demirtas is likely to draw significant backing against Erdogan and other candidates, while also boosting the prospects of his party entering parliament.

Turkish authorities imposed the state of emergency after a failed military coup in July 2016 in which 250 people were killed. Since then more than 160,000 people have been detained and nearly the same number of civil servants have been dismissed, the United Nations said in March.

Rights groups and some Western allies say Erdogan has used the putsch as an excuse to quash dissent. The HDP says as many as 5,000 of its members have been detained. On Saturday, it said co-leader Sezai Temelli had his passport confiscated at Istanbul airport on his way to Germany for election campaigning.

The government says the post-coup measures are necessary to confront the security challenges Turkey faces.

When he called the snap June 24 vote last month, nearly a year and a half earlier than scheduled, Erdogan said it would allow Turkey to move more swiftly to the powerful executive presidency which he has long advocated.

Erdogan moved seamlessly into campaign mode and Turkish media is saturated with coverage of him and his ministers – the president routinely speaks two or three times a day and the speeches are carried live by major broadcasters. Opposition parties get far less coverage, and pro-Kurdish HDP almost none.

On Friday, the HDP streamed its nomination of Demirtas live on social media while mainstream broadcasters ignored it.

Demirtas said Erdogan and his ruling AK Party, which has been in power for 15 years, called the early election over fears of waning support and said Kurdish voters would not vote for “a racist party”.

“The AKP government is losing its support rapidly. The economy is also being dragged into a crisis. The government plans to control the state before hitting rock-bottom,” he said.

“The people in Turkey are fed up with the AKP and want to get rid of them, and the AKP surely knows this,” he said.