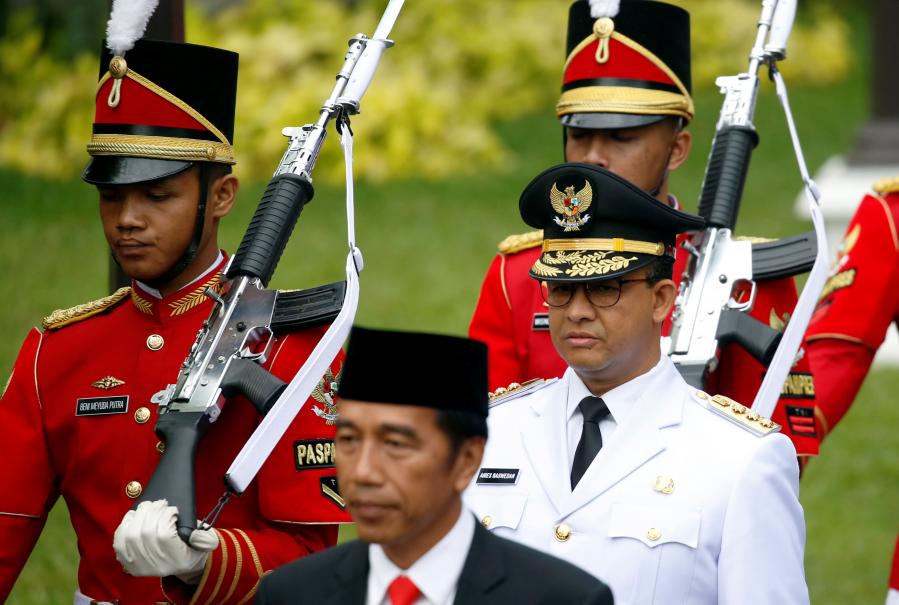 Indonesian President Joko Widodo swore in a former education minister as Jakarta’s governor on Monday, months after an election that opened up religious and ethnic divisions in the world’s biggest Muslim-majority country.

Anies Baswedan was inaugurated as Indonesia’s reputation for religious tolerance comes under scrutiny due to the rising clout of Islamists in a nation with large Christian, Hindu and Buddhist minorities.

Baswedan faced criticism after winning April’s vote with the support of Islamist groups who had agitated for months against his opponent and former governor Basuki Tjahaja Purnama – an ethnic Chinese Christian – whom they accused of blasphemy against Islam.

“We will ensure that the governor of Jakarta will be the governor of us all, of those who voted for us and those who didn‘t,” Baswedan told reporters, wearing a crisp white uniform after a ceremony in the Dutch colonial-style state palace.

Groups like the hardline Islamic Defenders Front (FPI) hope that Baswedan will impose a more “Islamic lifestyle” in the city of more than 10 million people.

Novel Bamukmin, head of FPI’s Jakarta chapter, said the group would “push” Baswedan’s administration to gradually close down bars and clubs in a city known for a freewheeling nightlife because “it’s immoral and…not Islamic culture”.

He told Reuters the group would begin by calling for the cancellation of the city’s New Year’s Eve celebration, which sees thousands of residents flock to street markets, concerts, and traditional theater performances funded by the city.

A spokesman for Baswedan was not immediately available for comment.

Sandiaga Uno, Baswedan’s deputy, has previously said the administration would consider setting up “sharia-inspired” or sharia-compliant entertainment spots similar to those in Abu Dhabi or Dubai.

Indonesia is officially secular and its constitution enshrines religious diversity, though the return to democracy two decades ago after the end of the autocratic rule of Suharto has allowed hardline groups to flourish.

While religion was an important factor during the election, most Jakarta residents are also concerned with issues such as chronic traffic congestion and regular flooding.

“The hope is for Jakarta to move forward so it’s cleaner and the poor receive help,” said Wisnu, a 42-year-old courier.

“I don’t feel Anies-Sandi need to pay back those (Islamist) groups in any way,” he said, referring to the new governor and his deputy.

The FPI led mass rallies in the run-up to the election to urge voters to pick a Muslim candidate over Purnama. After being put on trial and losing the election in the second round, Purnama was sentenced in May to two years in prison in a ruling that was internationally condemned as unjust.

Baswedan made public appearances with the leaders of the rallies and FPI but denied pandering to Islamist groups to win support.

Baswedan and Uno are backed by the main opposition party Gerindra, which has now wrenched control of the capital away from Widodo’s ruling party.

“Jakarta serves as a national political barometer,” said Gerindra official Arief Poyuono. “Because of that it is important that Gerindra has taken over control of Jakarta…to be able to win in general and presidential elections in 2019.”

The battle for the Jakarta governorship was widely seen as a proxy for the 2019 presidential election.

Baswedan’s main backer is retired general and Gerindra chief Prabowo Subianto who is widely expected to run for president against Widodo in 2019.