His Instagram feed, where he proclaimed to the world that he was the one who purchased Basquiat's painting, is peppered with shots of his luxury living -- including private jets, yachts and designer watches, but also his beloved art 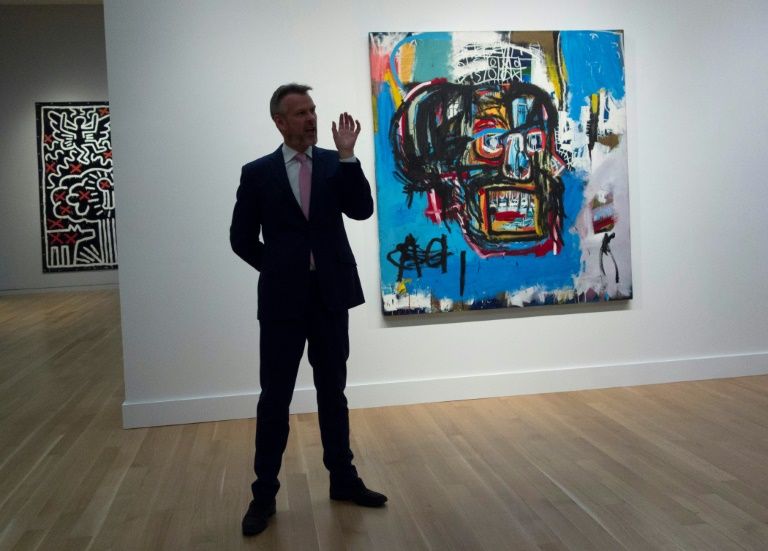 The price, a record for the artist, is reminiscent of 1980s Japan when corporate big-spenders splashed out on Impressionist art — along with foreign property and businesses — in an asset-buying spree.

But billionaire Maezawa insists he is just an “ordinary collector” — despite his extraordinary bank balance. His purchases are born out of love and driven by gut instinct, rather than the instructions of any art advisor.

“I buy simply because they are beautiful. That’s all. I enjoy classics together with the history and stories behind them, but possessing classics is not the purpose of my purchase,” he told AFP.

Rather than squirrel away his latest purchase — Jean-Michel Basquiat’s 1982 “Untitled”, a skull-like head in oil-stick, acrylic and spray paint on a giant canvas — he plans to loan it out to galleries worldwide.

“I hope it brings as much joy to others as it does to me, and that this masterpiece by the 21-year-old Basquiat inspires our future generations,” he said after the New York sale last month.

The 41-year-old’s style is a step change from the corporate image of Japan’s traditional art collectors who possess paintings as investment tools or to cement their social status.

Paper tycoon Ryoei Saito, who bought Vincent Van Gogh’s “Portrait of Dr Gachet” in 1990 for $82.5 million — a then record — and Pierre-Auguste Renoir’s “Bal du Moulin de la Galette” for $78.1 million — famously triggered outrage when he said he would have the canvases put in his coffin and cremated with him when he died. He later recanted.

“Many Japanese rushed to buy paintings for investment during the bubble economy,” said Shinji Hasada, an official at Shinwa Art Auction, of the 1980s and 1990s boom period

But many of the bubble-era masterpieces were sold off in a fire sale when the Japanese economy collapsed. Today Japan’s art collection market has shrunk to around one-twentieth of its peak, Hasada explained.

And while collectors such as former chairman of publisher Benesse Soichiro Fukutake, who helped transform a remote island into an art haven, have bolstered interest, Hasada believes Maezawa could inject new life into the sector.

“In all eras of history, patrons have come out to boost the art world, and in that sense he is the modern one we have been waiting for,” Hasada said.

An aspiring rock star as a teen, he moved on to selling music merchandise via mail order and then online. In 1998 Maezawa founded Start Today, which operates the nation’s largest online fashion mall, ZOZOTOWN.

Today, he is 11th richest person in Japan with a fortune of $3.5 billion, according to business magazine Forbes.

His Instagram feed, where he proclaimed to the world that he was the one who purchased Basquiat’s painting, is peppered with shots of his luxury living — including private jets, yachts and designer watches, but also his beloved art.

Many traditional collectors are more secretive — “Untitled” had previously not been seen in public for decades — but Maezawa wants to engage a new generation with his passion — some 73,000 people follow his posts.

“I think (Instagram) is helping promote contemporary art in terms of information sharing,” he explains, adding that he has also uses social media to discover and buy pieces from new talent.

He founded the Contemporary Art Foundation in Tokyo, a boon for the city’s talent who feel they have finally found a champion.

Yukimasa Ida, a 27-year-old contemporary artist who has won the foundation’s special jury award, regards Maezawa as a “figurehead” of up-and-coming Japanese artists aiming to challenge the global artworld.

“He is an encouraging collector, of a kind that has been hardly seen in Japan … in terms of fostering and influencing young artists,” Ida told AFP.

Maezawa said he wanted to introduce upcoming artists to a broader audience.

“I’m happy that good works by young artists with limited chances will see the light of day by my purchasing them,” he added.