A little over an hour's drive from the Jordanian capital Amman, lies one of the most breathtaking and seemingly tranquil scenes in the country. But the lush mountainous terrain around al-Wahda dam near the Syrian border, is far from peaceful.

Jordanian border guard are on a constant state of alert here. Their weapons pointed towards Syria's green hills on the other side of Yarmouk river.
Some of the villages across the river live under the control of an Islamic State group affiliate, the Khaled bin al-Waleed Brigade. The group has mostly been battling Free Syrian Army rebels but it has also tried to target Jordan, according to officials.
And as the US-led coalition forces step up their campaign on IS in Iraq's Mosul and Syria's Raqqa, Jordanian officials are warning that pressure on jihadists in these two countries may push them closer to Jordan's doorstep.

Jordan is a key US ally in the region; its security forces and air force have been among the most active members of the global coalition in the fight against the terror group.
As IS may now be turning its attention to the Kingdom, Jordan is stepping up its efforts to secure its borders.
"We reinforced our borders especially in the northern part and eastern part," Brig. Gen. Sami Kafawin, commander of Jordan's border guard force, told CNN. "We [are] reinforced by manpower, equipment [and] the whole weapons system. We need to make a balance between the security and the fighting, if it happens."
Nearly half of all armed forces are now deployed to the border regions, Jordanian military officials say.
Last June, a suicide attack on the northeastern border left at least seven security forces dead. It was the first attack of its kind targeting Jordan's borders, then-deputy prime minister, Nasser Judeh told CNN's Wolf Blitzer at the time.

Commanders stationed at the northern border told CNN their troops foil near daily smuggling or infiltration attempts and are always prepared for possible militant attacks.
According to Kafawin, Jordan is readying for all kinds of threat scenarios because they know the group is going to try and expand its reach beyond Iraq and Syria and may divert resources to do so.
And the newly appointed commander does not rule out the Kingdom requesting support from the US-led coalition in securing its borders.
"I think the coalition is ready to support because we are not talking about Jordanian border — we are talking about the region which is part of the global coalition," he said.
Tags
amman Free Syrian Army Islamic state jordan Jordan-Syria border Khaled bin al-Waleed Brigade 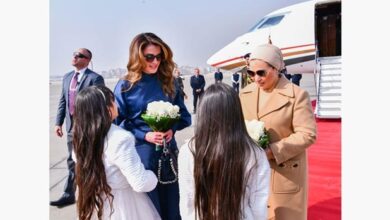