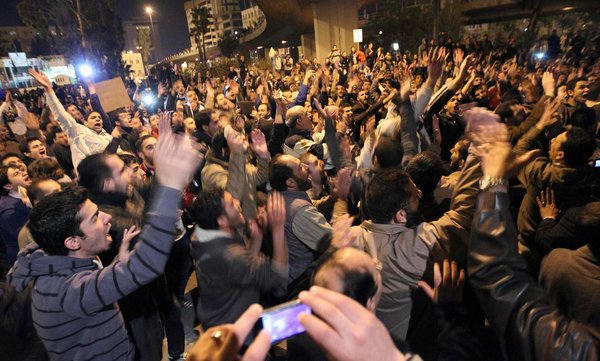 AMMAN –– A demonstration in the Jordanian capital was a wash on Friday, as rain soaked the city a week after violent protests here called for the toppling of the monarchy.

Jordanians turned out in much smaller numbers outside the Al-Husseini Mosque in downtown Amman, a traditional protest site, to condemn public corruption and demand the return of higher fuel and gas subsidies, which Prime Minister Abdullah Ensour announced would be lifted on 13 November.

The gathering of a few hundred people lasted under an hour and was met by a smaller counter-demonstration of Jordanians blasting nationalistic music and displaying photographs of Jordan’s King Abdullah II.

The rain and a strong police response last week put a damper on overall turnout. Nearly 200 people were arrested, over 70 injured, and one killed in the days after the announcement of the subsidy cuts, according to media reports.

“People are very afraid of getting arrested,” Mohamed Jimzawi, 23, a university student from Irbid, said just before he and his friends decided to leave because of the weather.

Since last week’s price hike, demonstrations, sit-ins, strikes, and marches have brought out limited but consistent numbers of protesters across the country.

The particularly strong visceral reaction in the hours immediately after the announcement reflected a level of dissatisfaction beneath the surface that has yet to be addressed by Jordan’s King Abdullah II, analysts said.

The prime minister said the price rise became necessary as Jordan’s finances approached a breaking point. The kingdom’s budget deficit and foreign debt have swelled, and the government cut subsidies in part to secure a US$2 billion loan from the International Monetary Fund.

The recent protests have been notable for their emphasis on economics, in contrast to demonstrations for nearly two years that were centered on political reform.

Prices jumped 54 percent for cooking and heating gas and increased by nearly a third for diesel and kerosene products when the subsidy cuts took effect just hours after the announcement.

Protesters over the past week have more frequently used a slogan pulled from uprisings across the Arab world, “The people want the fall of the regime,” and have become bolder in blaming Abdullah for the country’s problems. Insulting the king is a crime in Jordan, and could result in imprisonment.

Activists protested in seven of the country's 12 governorates today, according to The Jordan Times, a partially state-owned newspaper here.

The Muslim Brotherhood, the country’s most organized opposition group, has called for a larger protest in Amman next Friday.

Jordanians have long found themselves squeezed by high poverty and unemployment. The official rate of unemployment is in the low teens, but unofficial estimates put it around 30 percent.

Protesters this week have said that last week’s subsidy cuts only make it harder to live from day to day as corrupt officials at the top pilfer the country’s finances.

“Prices are very expensive, and wages are low,” Alaa, a young protester at the Amman demonstration, said.

But many Jordanians remain opposed to the demonstrations, worrying that if the protests continue, their country could dissolve into chaos like that across their northern border with Syria.

Few have called for the king’s downfall, and even the most active opposition leaders have distanced themselves from demands for regime change. Many Jordanians put the blame on ministers’ corruption and mismanagement of government finances, which they say line the pockets of regime loyalists at the expense of the poor.

“In Jordan, we have low wages,” Ahmed Kayyal Zawawi, 38, an electronics storeowner who has not participated in the demonstrations, said. “They’re adding more poverty to poverty.”

Around the corner, Yezzin Faouri, 28, said he was worried about rising crimeif the economy continues down its current path. He has already felt the price hikes during his daily purchase of one or two tanks of gas to heat the falafel at the downtown shop he mans.