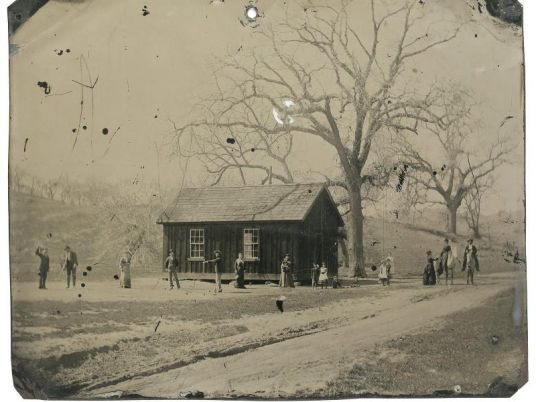 For the US$2 he spent to buy three old photographs, Randy Guijarro may have hit the mother lode. Among them was a tintype purported to be of Wild West gunslinger Billy the Kid, now valued at $5 million.
The 4-by-5-inch image shows Henry McCarty, also known as William Bonney, playing croquet with accomplices from his New Mexico gang known as the Regulators, according to experts retained by the firm selling the artifact.
Guijarro, who describes himself as an US history buff, said he bought the photo at a junk shop in Fresno, California in 2010. It was not until he studied it closely that he realized he might be holding an important 19th-century historical item.
"The faces in the picture were very clear, and I thought that one of them sure looks like the Kid," Guijarro said.
Guijarro took the ferrotype print to Kagin's Inc., a San Francisco company specializing in US gold coins and Western Americana, to determine whether it was genuine.
Kagin's ultimately authenticated the photograph as only the second known image of Bonney, and the only one that includes members of his gang, said David McCarthy, the company's senior numismatist.
The firm is brokering the sale of the metallic image, which it has appraised and insured for $5 million, he said.
Much of Bonney's life is steeped in myth, including reports that he killed 21 men. What is certain is that he was shot dead at age 22 by Sheriff Pat Garrett in 1881, months after a daring jailbreak.
For decades, the only known photo of Bonney was an iconic 2-by-3 inch tintype portrait of the outlaw standing outside a New Mexico saloon, gripping the barrel of a Winchester carbine rifle and with a single-action Colt pistol holstered on his hip.
Croquet and cardigans
Bonney gave that photograph to his fellow cattle rustler, Dan Dedrick, whose descendants kept it in their family until it was put up for sale in 2011.
It was purchased for $2.3 million at a Denver auction by Florida billionaire and energy executive William Koch.
Koch told Reuters that he spoke with Kagin's about the recently-surfaced photo. But he said would not bid on the item, and that he agrees with some skeptics who doubt its authenticity.
"I already own the archetype Billy the Kid photograph," said Koch, who possesses a vast collection of American West art and memorabilia.
McCarthy said Kagin's experts "validated every detail in this photo."
McCarthy believes it was taken in September 1878 outside Roswell, New Mexico shortly after the end of the so-called Lincoln County War, a series of bloody skirmishes among cattle barons in the sprawling territory.
The company retained experts in wet-plate photography, 19th-century apparel, facial recognition technology and even on vintage croquet sets, McCarthy said.
He said researchers placed Bonney and his cohorts in the Chaves County area after a Texas cattle drive that wound up in New Mexico.
They even located the building in the background which is still standing, McCarthy said, although a facade was built over it in the 1930s. A lumber expert concluded the underlying structure was from the period, he added.
All those elements, including the ring on Bonney's pinkie finger and his telltale clothing, point to its authenticity, McCarthy said.
"I defy you to find another cowboy wearing a cardigan sweater," he said.
A documentary chronicling the year-long effort by Guijarro to authenticate the photo is set to air on Sunday, October 18 on the National Geographic Channel.
For Guijarro, he quit his job a telecoms technician so he could devote himself full time to his avocation.
"I guess I'm now an antiquarian," he said.