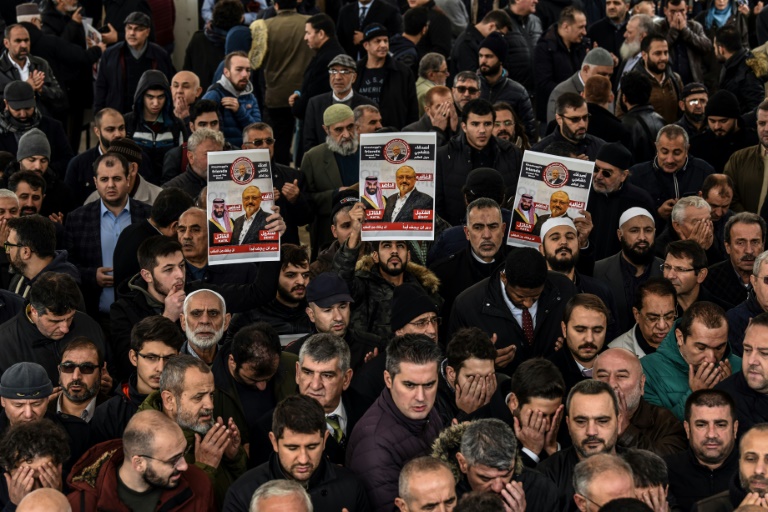 Saudi journalist Jamal Khashoggi was murdered on October 2 in his country’s consulate in Istanbul.

Khashoggi, a Washington Post contributor and critic of Crown Prince Mohammed bin Salman, was drugged and dismembered and his remains were then removed from the consulate, the Saudi public prosecutor’s office said on Thursday.

Here is what we know about the Saudis accused of involvement in the murder that has provoked an international outcry.

– A total of 21 people, all Saudi citizens, are in custody in connection with Khashoggi’s killing, the Saudi prosecutor’s office said, without identifying them.

– Of the 21 suspects, 11 have been indicted while investigations continue into the others.

– The prosecutor’s office said it was seeking the death penalty against five accused who “are charged with ordering and committing the crime”.

On October 20, Riyadh announced the sacking of five Saudi officials — two of them part of Prince Mohammed’s inner circle — and the detention of 18 suspects, whose names were not released.

– General Ahmad al-Assiri, who was fired as deputy head of intelligence, was implicated in the prosecutor’s statement, which said that a “former” deputy intelligence chief ordered the “leader of the mission” to “bring back the victim by means of persuasion, and if persuasion fails, to do so by force”.

– Royal media adviser Saud al-Qahtani has also been fired. Although not named by the prosecutor’s office, it said a “former adviser” played a central role in the operation.

– Mohammed al-Rumaih, Abdullah al-Shaya and Rashad al-Muhamadi, who all held posts in the kingdom’s intelligence service, were also sacked following the killing.

The United States on Thursday slapped economic sanctions on 17 Saudis allegedly involved in the Khashoggi murder. Among them are:

– Qahtani for “being part of the planning and execution of the operation that led to the killing” of Khashoggi, the US Treasury said.

– Maher Mutreb, a close aide to Qahtani, who “coordinated and executed” the operation.

– Mohammed al-Otaibi, the Saudi consul in Istanbul, where the journalist was killed.

The Washington Post reported on Friday that the US Central Intelligence Agency had concluded Prince Mohammed, the “de facto ruler” of the kingdom, was behind the killing of Khashoggi.

However, the New York Times said that while telephone intercepts showed Prince Mohammed was working to lure Khashoggi to Saudi Arabia, he had not said in the calls that he wanted the journalist killed.

Saudi prosecutor’s office spokesman Shaalan al-Shaalan said on Thursday that the prince had “no knowledge” of Khashoggi’s murder.

A physical altercation after Khashoggi entered the consulate led to him being “forcibly restrained and injected with a large amount of a drug resulting in an overdose that led to his death, may Allah bless his soul”, the prosecutor’s office said.

It said his body was then dismembered, “transferred outside the consulate” and handed over to a “collaborator”.

What was done with Khashoggi’s remains afterwards is still unknown.