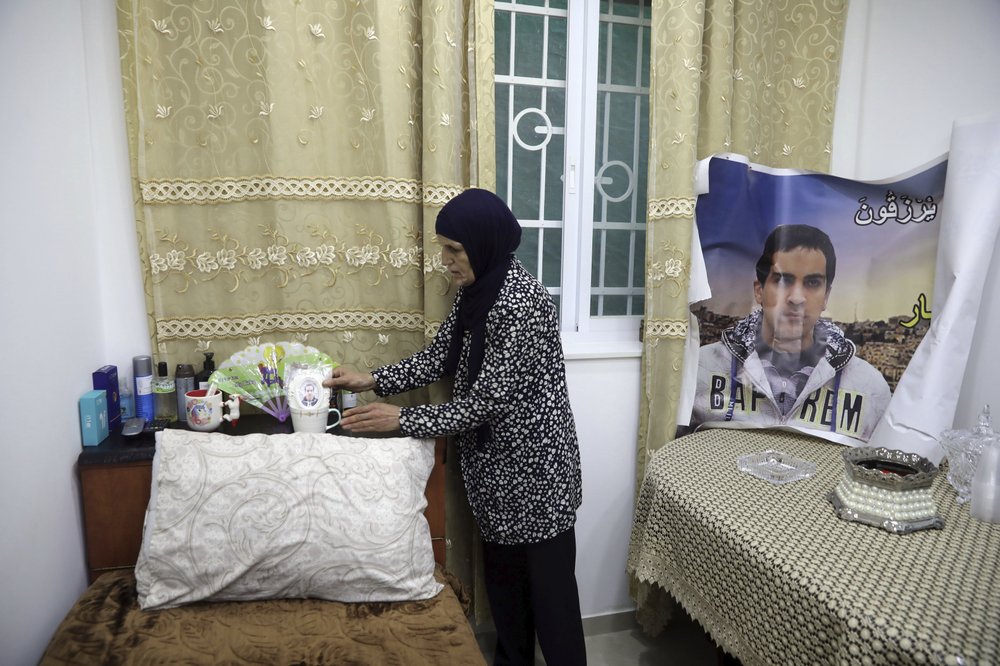 JERUSALEM (AP) — Eyad Hallaq liked to watch cartoons. He loved dressing up and wearing cologne. He even dreamed of getting married. But his favorite activity was walking to school, where he volunteered in the kitchen, preparing meals for his fellow special-needs students.

Early on Saturday, the 32-year-old Palestinian with severe autism was chased by Israeli border police forces into a nook in Jerusalem’s Old City and fatally shot as he cowered next to a garbage bin after apparently being mistaken for an attacker. He was just a few meters from his beloved Elwyn El Quds school.

The shooting has drawn comparisons to the death of George Floyd in the US and prompted a series of small demonstrations against police violence toward Palestinians. The calls for justice have crossed Jewish-Arab lines, a rarity in this deeply polarized society.

Yet for his devastated family, such gestures have provided little comfort and even less hope that the officers who shot Hallaq will be punished.

“Whenever a person is martyred here, we say that we hope for change,” said Hallaq’s father, Khiri. “Where is the change?”

Two large photographs of Hallaq sit in the living room of the family’s modest home in a Palestinian neighborhood of east Jerusalem. In one photo, wearing an Adidas sweatshirt, Hallaq holds a cactus he planted during the coronavirus lockdown. It was the last photo the family took of him. His tiny bedroom is neatly made up, with a small photo of Hallaq above the pillow, next to his cologne collection.

“He was a gentle soul,” his mother, Rana, said as she fought back tears. She described him as intensely shy, afraid of strangers, unable to make eye contact and terrified of loud noises.

“He liked nice clothes, but he had no friends. He didn’t talk to others. Only with me would he talk about what had happened that day at school,” she said.

What exactly happened on Saturday morning remains unclear. According to the family, Hallaq, wearing a badge that identified him as having special needs, left home on his daily walk to school, about 10 minutes away.

Police said that officers in the Old City spotted a man carrying a “suspicious object that looked like a pistol.” When the man failed to heed calls to stop, police said they opened fire and “neutralized” him after a chase.

Hallaq’s teacher, who had accompanied him on that last walk to school, told Israel’s Channel 13 TV that she repeatedly cried out to the police that he is “disabled” and tried to stop the shooting. “They didn’t listen to me. They didn’t want to listen to me,” she said.

She told the station they fired three bullets at him. He fell to the ground, asked her for help, then ran for cover in a small area housing a garbage bin. Officers came after him and killed him. At least five bullet holes could be seen in the wall of a small structure at the site.

Hallaq’s parents said they rushed to the scene but were not allowed to see him. Police later came to the house, cursing them as they searched for weapons, they said. They said police found nothing in the home.

Israel’s Justice Ministry said two officers have been placed under house arrest, but gave no further details. Security camera footage has not been released. Khiri Hallaq said he has heard nothing from investigators.

Even with the world’s attention focused on the unrest shaking the US, Hallaq’s death has reverberated across Israel.

Scores of people, mostly Jewish Israelis, marched through downtown Jerusalem on Saturday night to condemn the shooting. Demonstrations were also held in Arab towns throughout the week. Inspired by the protests in the US, demonstrators have held signs that say “Black Lives Matter,” “Palestinian Lives Matter,” or showed photographs of Floyd and Hallaq.

Hallaq’s death is expected to be a theme at a larger demonstration planned by a coalition of Arab and Jewish groups in central Tel Aviv on Saturday.

“Is there anything lonelier than an autistic person cowering and trembling in fear in a garbage shed, not understanding what is going on and why, while policemen empty a magazine of bullets into him,” wrote Haaretz columnist Rogel Alpher, a parent of a grown autistic child. “Good God, they executed him. If that happened to my son, I’d find it hard to go on living.”

The shooting came two weeks after another fatal shooting of an Arab man outside an Israeli hospital. According to police, the man was shot after stabbing a security guard. Security camera footage showed the man, who reportedly suffered from mental illness, lying on the ground when he was shot multiple times.

For Palestinians in the occupied West Bank and contested east Jerusalem, and members of Israel’s Arab minority, these cases reflect what they see as Israeli forces’ loose trigger fingers when it comes to dealing with Arab suspects.

Public Security Minister Amir Ohana, who is close to Netanyahu, said the family “deserves a hug” and vowed to introduce new tactics for police to better identify individuals with disabilities. A stream of Jewish and Arab well-wishers, including a former chief rabbi of Jerusalem, have visited the family.

Hallaq’s mother played down the outcry and said nothing will bring back her son. “Sympathy is temporary and then ends,” she said. Making things even more painful, the family has little faith in an Israeli justice system they see as hopelessly biased.

“If an Arab killed a Jew, what would have happened?” said the father. “They would demolish his home and arrest all of his family. That is the difference.”

According to Israeli human rights group B’Tselem, there have been at least 11 cases over the past two years in which Palestinians who did not pose a threat were killed while fleeing Israeli security forces.

Amit Galutz, a spokesman for B’Tselem, said no charges have been filed in those cases and he did not expect different results in the Hallaq shooting.

“Existing Israeli law enforcement mechanisms are designed to protect the perpetrators of this violence — not their victims,” he said, calling the investigation into Hallaq’s killing “the first step of its whitewash.”

He said officers are on heightened alert in places like the Old City because the area has seen numerous Palestinian stabbings and shootings there over the years.

“Subjectively, the police officer feels more threatened. He knows he is entering an area where he could be subjected to violence,” Tzur explained.

Hallaq’s mother said nothing could justify the death of her son. “We are convinced that those who killed him will not be punished,” she said. “Justice does not exist.”

Image: In this Wednesday, June 3, 2020 photo, Rana, mother of Eyad Hallaq, arranges his room in their home in East Jerusalem’s Wadi Joz. Early Saturday, Hallaq, a 32-year-old Palestinian with severe autism, was chased by Israeli border police forces into a nook in Jerusalem’s Old City and fatally shot as he cowered next to a garbage bin after apparently being mistaken as an attacker. He was just a few meters from his beloved Elwyn El Quds school. (AP Photo/Mahmoud Illean)