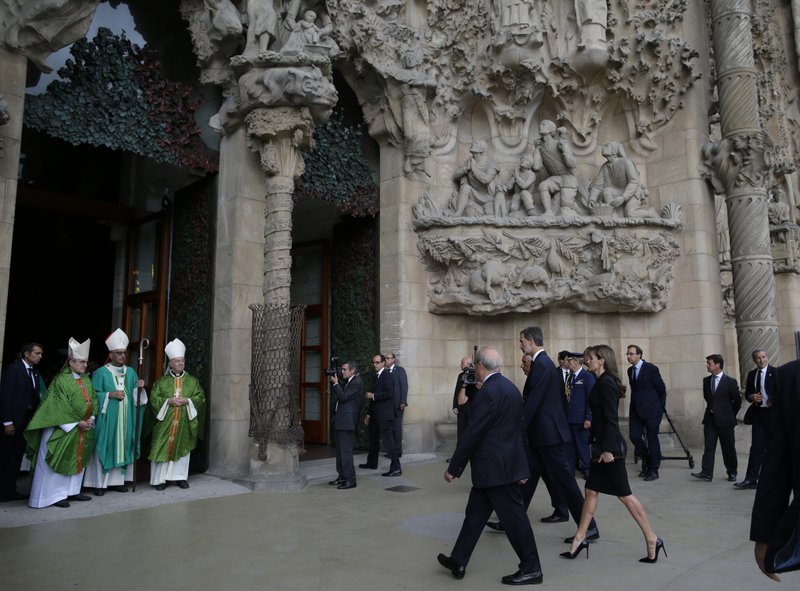 Pope Francis is calling for an end to the “inhuman violence” that has targeted innocents in Burkina Faso, Spain and Finland in recent days.

Francis led the crowd gathered in St. Peter’s Square for his Sunday noon blessing in prayer for the victims, and said the world was carrying in its heart “the pain of these terrorist attacks.”

He begged God to “free the world from this inhuman violence.”

Eighteen people were killed in the Burkina Faso capital a week ago when Islamic extremists gunned down patrons at a popular restaurant. In Spain, members of an extremist cell mowed down pedestrians in Barcelona and a nearby seaside resort, killing 14 and injuring more than 120.

Vancouver police say 53-year-old Canadian Ian Moore Wilson was among those killed in the Barcelona attacks and his wife Valerie was wounded.

The city police department issued a statement from Wilson’s daughter Fiona, a staff sergeant in the force, describing her father as an adventurous traveler and “much-loved husband, father, brother and grandfather.”

Fiona Wilson and the Vancouver police thanked the emergency workers and others who helped her father in his final moments and got assistance for her mother.

She wrote “in the midst of this tragedy, my dad would want those around him to focus on the extraordinary acts of human kindness that our family has experienced over the past several days, and that is exactly what we intend to do.”

The archbishop of Barcelona is calling for Spain to unite to work for a more peaceful world following the deadly dual vehicle attacks claimed by Islamic extremists.

In his homily, he said the presence of so many people was a “beautiful mosaic” of unity to work for a common objective of “peace, respect, fraternal coexistence and love.”

He read aloud a telegram of condolences sent by Pope Francis, who called the attacks a “cruel terrorist act” and a “grave offense to God.”

Two attacks on pedestrians Thursday and Friday in Barcelona and nearby Cambrils left 14 dead and over 120 wounded.

A Mass in honor of the victims of Spain’s vehicle attacks is underway at Barcelona’s Sagrada Familia basilica, the unfinished Art Nouveau masterpiece of architect Antoni Gaudi that is a symbol of European Christianity.

Cardinal Joan Josep Omella, the archbishop of Barcelona, is celebrating the Mass in the presence of Spain’s royals and top officials including Prime Minister Mariano Rajoy.

With its soaring towers, intricate sculptures and stained glass windows, the “Holy Family” church is dedicated to the Christian concept of family and faith. It was begun in 1882 and is not expected to be finished until 2026.

When Pope Benedict XVI consecrated it in 2010, he declared it “a magnificent achievement of engineering, art and faith.”

Two attacks on pedestrians Thursday and Friday in Barcelona and nearby Cambrils left 14 dead and over 120 wounded.

Spain’s king and queen and its prime minister will be attending a solemn Mass at Barcelona’s Sagrada Familia basilica for the victims of the terror attacks that killed 14 people and wounded over 120.

On Saturday, Spain’s royals visited injured attack victims in local hospitals, placed a wreath and candles at the attack site on Barcelona’s Las Ramblas promenade and signed a book of condolences at Barcelona city hall.

Thursday’s van attack in Barcelona killed 13 people. Hours later, a car attack in the seaside town of Cambrils killed another person early Friday. The Islamic State group has claimed responsibility for the attacks.

Spanish police have put up scores of roadblocks across the northeast in their manhunt for the suspected driver of the van that plowed into pedestrians in Barcelona, killing 13 people and injuring over 120.

Police in Catalonia are searching Sunday for Younes Abouyaaquoub, a 22-year-old Moroccan suspected of carrying out the attack Thursday claimed by the Islamic State group. Local media says the manhunt is concentrating on the towns of Ripoll and Manlleu.

The investigation is also focusing on a missing imam who police believe could have died in a massive house explosion Wednesday. Police believe Abdelbaki Es Satty radicalized the young men in the extremist cell, which may have accidently blown up a house in the seaside town of Alcanar.