WASHINGTON (AP) — A top Republican ally of President Donald Trump went a step further than the White House on Sunday by calling for Saudi Arabia to be suspended from an American military training program after a student pilot from the kingdom shot and killed three sailors at a U.S. naval base in Florida.

Trump had called for the program to be reviewed but Sen. Lindsey Graham, R-S.C., said he wanted more.

“We need to suspend the Saudi program until we find out what happened here,” he said, adding that he likes the idea of training foreign pilots and helping them understand how the U.S. system works.

“But there’s something really bad here,” Graham said. “We need to slow this program down and reevaluate.”

Rep. Matt Gaetz, R-Fla., whose district includes the base in Pensacola, said Friday’s shooting “has to inform our ongoing relationship with Saudi Arabia.”

Gaetz, who, like Graham, is an outspoken defender of Trump during the impeachment inquiry being led by House Democrats, declined to criticize the president when asked whether Trump has been tough enough with Saudi Arabia.

He said he and Trump have been communicating regularly, and appeared to also call for the program’s suspension.

“We should not be taking new incoming Saudi students until we’re absolutely confident in our vetting process,” Gaetz said.

The U.S. has long had a robust training program for Saudis, providing assistance in the U.S. and in the kingdom. Currently, more than 850 Saudis are in the United States for various training activities. They are among more than 5,000 foreign students from 153 countries in the U.S. going through military training.

The FBI has identified Friday’s shooter as Mohammed Alshamrani, 21. Investigators said he was a 2nd Lt. in the Royal Saudi Air Force and a student naval flight officer of Naval Aviation Schools Command.

Alshamrani opened fire inside a classroom at the naval base, killing three people and wounding two sheriff’s deputies before one of the officers killed him, authorities said. Eight other people were also wounded.

The FBI announced Sunday that it was working on the presumption that the shooting was an act of terrorism, a point echoed hours earlier by Robert O’Brien, Trump’s national security adviser. The FBI was also interviewing acquaintances and following up on a visit by Alshamrani to New York City, including Rockefeller Center, in the run-up to Friday.

Democratic presidential candidate Cory Booker faulted Trump for taking what he said is a “transactional” approach to U.S. relations with the Saudi kingdom focused on financial interests and not moral values.

Booker, a New Jersey senator, said the relationship is “unacceptable”′ and promised to change it if he is elected president next year.

Trump has appeared more interested in promises by the Saudis to spend billions buying American weapons than in in holding the kingdom accountable for human rights violations, including the killing in 2018 of Washington Post writer Jamal Khashoggi at the Saudi consulate in Turkey. Khashoggi was a critic of Saudi Arabia.

U.S. intelligence agencies have concluded that knowledge of Khashoggi’s killing reached the highest levels of the monarchy, but Trump declined last year to penalize Saudia Arabia over the slaying.

Trump told an interviewer this year that Saudi Arabia buys a lot of American products and “that means something to me.” He argued that if he refuses to sell to the Saudis, they will turn around and buy weapons from U.S. rivals such as China and Russia.

Gaetz and Booker were interviewed on ABC’s “This Week,”′ Graham appeared on Fox News Channel’s “Sunday Morning Futures” and O’Brien spoke on CBS’ “Face the Nation.” 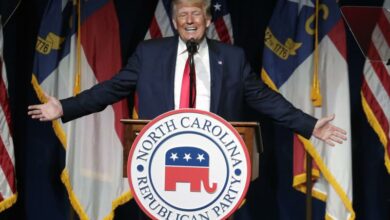 Trump to GOP: Support candidates who ‘stand for our values’