A coal mine explosion that struck northern Iran killed at least 35 people, semi-official news agencies reported Thursday, as rescuers worked a second day to reach those trapped inside after the blast.

The Fars, Mehr and Tasnim news agencies all carried similar reports Thursday morning. State media did not immediately report on the rise in the death toll in the disaster Wednesday at the Golestan province mine. In a live broadcast by state television, Sadegh Ali Moghadam, the provincial director general of disaster management, said 22 dead bodies had been recovered.

The province will observe three days of mourning after the explosion, Iranian state television reported. Meanwhile, President Hassan Rouhani issued an order demanding his government use all available resources to rescue those still trapped, according to the state-run IRNA news agency.

Provincial spokesman Ali Yazerloo said the blast happened at 12:45 pm local time Wednesday. Several officials blamed the explosion on accumulated gas and said it was affecting rescue efforts. At least 25 people were hospitalized over inhaling the gas during rescue efforts after the blast. 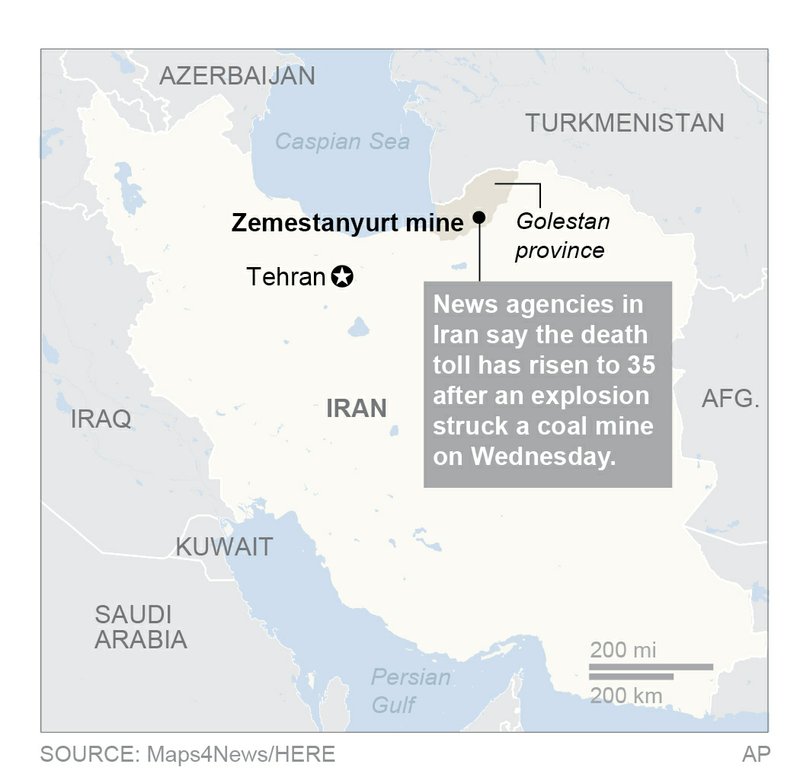 After the blast, ambulances, helicopters and other rescue vehicles raced to the scene as authorities worked to determine the scale of the emergency.

There was confusion about how many miners had been trapped inside, with numbers ranging from dozens to up to 80.

Semi-official Iranian news agencies posted images online from the scene, showing ambulances and emergency workers gathered at the mouth of the mine. Some showed dazed workers, covered in coal dust, being helped by bystanders or laying on the ground as rescuers rushed past with oxygen bottles.

More than 500 workers are employed at the Zemestanyurt mine, which lies 14 kilometers from Azadshahr, according to IRNA. Golestan sits along Iran's northern border with Turkmenistan and along the shore of the Caspian Sea.

Oil-producing Iran is also rich in a variety of minerals. Iran annually consumes some 2.5 tons of coal but only extracts about 1 million tons from its mines per year. The rest is imported, often consumed in the country's steel mills.

Since Iran's nuclear deal with world powers, the country has begun an effort to renovate some of its coal mines. Delegations have visited Tehran from foreign countries including the Czech Republic, hopeful for contracts