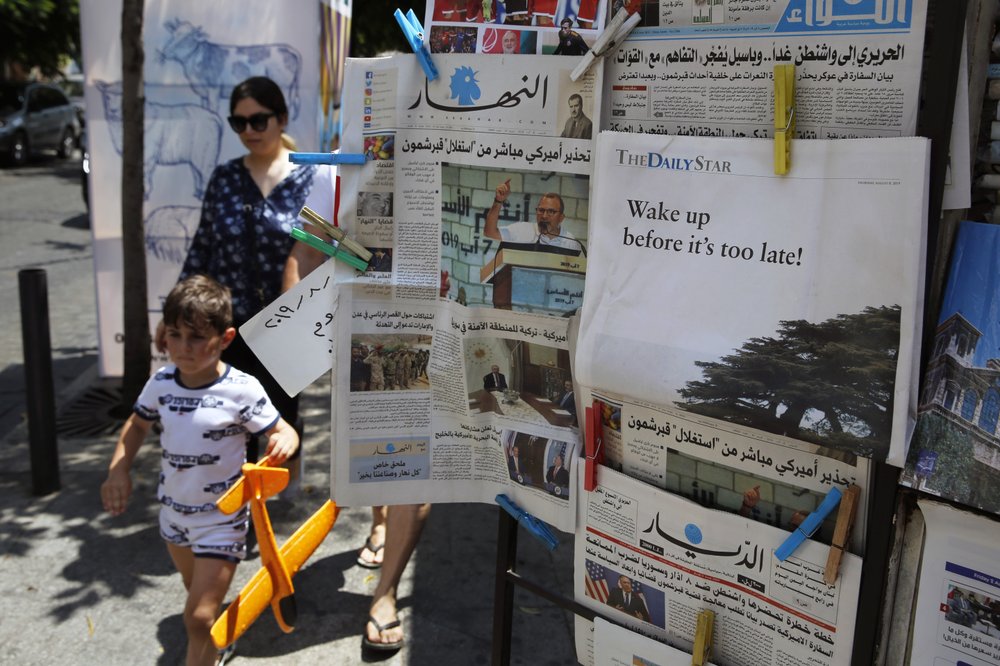 Each page of The Daily Star’s Thursday edition bore a single phrase referring to one of the country’s problems, including government deadlock, rising public debt, increasing sectarian rhetoric and unemployment. The back page had a photo of a cedar tree, a national symbol, with a caption reading: “Wake up before it’s too late!”

“We are sounding the alarm bell over the many challenges the country is facing,” the paper’s editor-in-chief Nadim Ladki told The Associated Press. “It’s a call on everyone— politicians, activists, ordinary people — to pull together in the same direction to resolve the crises and challenges.”

Lebanon has been in the grip of an economic crisis for months, and the government has not met since a June 30 shooting in a mountain village that escalated tensions between the Christian and Druze communities.

Rival groups in the Cabinet have been divided on how to proceed with the investigation of the shooting, which left two people dead.

The U.S. Embassy issued a statement Wednesday saying it supports a fair and transparent investigation into the shooting in the village of Qabr Shamoun.

“Any attempt to use the tragic June 30 event in Qabr Shamoun to advance political objectives should be rejected,” the embassy said in an apparent reference to the militant Hezbollah group and its allies, who are seen as pressuring Druze leader Walid Jumblatt.

Hezbollah on Thursday blasted the U.S. Embassy statement calling it “a blatant and gross intervention in Lebanese internal affairs” adding that it aims to “deepen divisions within Lebanon. The group called the crisis a “local political issue” that the Lebanese judiciary is dealing with.

Lebanon’s government is the product of a power-sharing agreement that ended the devastating 1975-1990 civil war and which divides powers among various religious sects. The political scene is split between a pro-Western coalition, which includes Jumblatt and his followers, and a bloc dominated by Hezbollah that is aligned with Syria and Iran.

The political infighting has made it impossible to maintain the country’s crumbling infrastructure or provide adequate public services. The national debt is hovering around $85 billion, or 150 percent of gross domestic product.

Photo: People walk past a shop selling newspapers in Beirut, Lebanon, Thursday, Aug. 8, 2019. Lebanon’s only English-language daily The Daily Star is protesting the country’s deteriorating economic and political conditions by publishing a blank edition. The back page had a photo of the cedar tree, a national symbol, with a caption reading: “Wake up before it’s too late!” (AP Photo/Bilal Hussein)