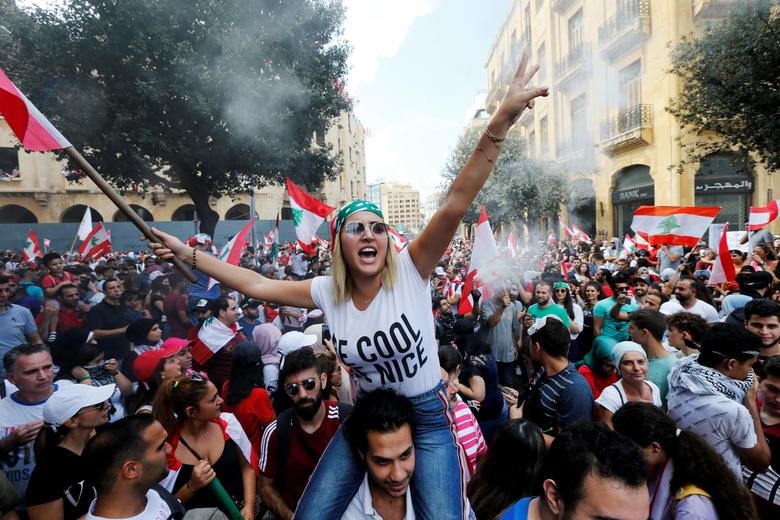 Protests in Lebanon have recently started up against poor economic conditions, quickly turning into a rejection of the entire ruling political class, with harsh slogans raised against the sectarian system and corruption in government and politics.

Setting aside those trivial comments from a few ‘dull and unchivalrous’ Egyptians about the “beautiful” female protesters of Lebanon, to compare these protests with their counterparts in the Arab world must come from the perspective that the sectarian system is socially deep-rooted in Lebanon.

Previous protests failed to break the intensity of the sectarian quotas, due to the inability of those calling for a secular Lebanon to provide an alternative capable of breaking the hegemony of the sectarian empire, which has built socially entrenched networks of interests and influence.

In Lebanon, this sectarian system is so deeply rooted in society, that civil wars and peaceful demonstrations have failed to change it for decades. The same issue has recently appeared in Iraq following the US invasion. Protests in both countries come ‘despite political and societal disparities’ against a dominant and corrupt sectarian system.

The Lebanese protest does not face an authoritarian regime or state, but rather a sectarian system that controls the Lebanese political class. Upon this system, spoils and quotas are shared, and only crumbs reach the ‘people’. The Lebanese protest must go through this system and also against it, which makes it difficult for the protest to succeed in bringing radical change.

A large category of the Lebanese people took part in these protests in a cross-sectarian way. The Sunnis of Beirut and Tripoli insisted on mentioning the names of all Hariri, Aoun, Nasrallah, and Berri to express their rejection of the people of the government ‘completely.’

The coming of these protest forces from civil society, independent civil initiatives and many young people with multiple religious and sectarian affiliations has made them without limits, which cannot be predicted.

These protesting forces have attacked the country’s political class, accusing them of corruption, including Hassan Nasrallah who has not been spared, having been seen by many at least as allying with corrupt people, even as his team attempts to penetrate the demonstrations and transform it into opportunity to settle scores with his political opponents.

However, the tools possessed by the ruling sectarian forces in Lebanon, namely Hezbollah and President Aoun’s alliance, remain stronger than the protesting forces.

Yet these forces can dislodge them, weaken their hegemonic and monopolistic capabilities and open up the horizon for a day, perhaps soon, to dismantle the sectarian system that rules the capabilities of this small yet rich and diverse country.

The Prime Minister, Saad al-Hariri, is close to the point of resignation, which will open the door to new Lebanese and regional variables.

Image: A demonstrator gestures as she carries the national flag during an anti-government protest in downtown Beirut, Lebanon, October 20. REUTERS, Moh