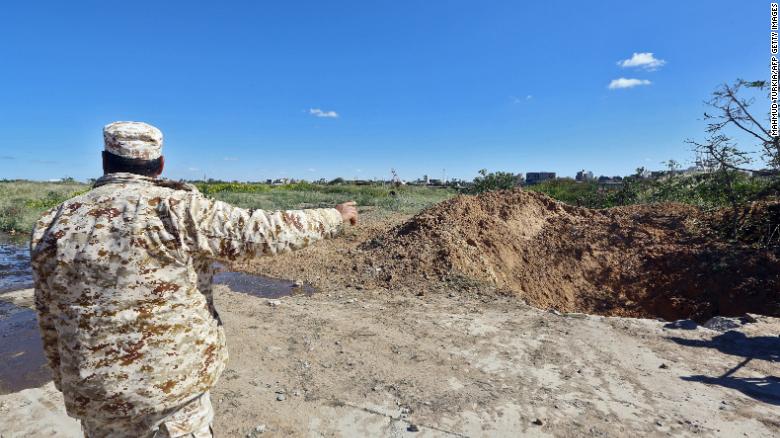 Tripoli’s only working airport was targeted in an airstrike on Monday, as forces loyal to renegade Libyan general Khalifa Haftar continued their advance on the capital, ignoring international calls for a truce.
Mitiga airport, in the eastern quarter of Tripoli, was shuttered after it was attacked by Haftar’s so-called Libyan National Army (LNA). Libya’s United Nations-backed government, the Government of National Accord (GNA), quickly condemned the aerial bombardment, calling it a war crime.
There is also fighting around Tripoli’s international airport, 15 miles south of the city center, which has not been operational for years. The GNA admitted Monday that it temporarily lost control of the site to Haftar’s fighters.
“Haftar forces attacked Tripoli four days ago, mainly from the south and got as far as controlling Tripoli international airport,” a GNA official told CNN Monday. “As of yesterday and today, Monday, Haftar forces have been pushed back and Tripoli secured.”
The same official said militias from the coastal towns of Misrata and Zawia — which are not under the GNA’s direct control — deployed troops to the capital as part of the counter-offensive against the LNA.
Years of fighting among various militias in the war-torn country have reached a crescendo in recent days, as Haftar pushes to take control of the capital.
The UN said that 3,400 people have been displaced in the upsurge of violence since Haftar ordered LNA forces to march on Tripoli Thursday. Twenty-one people have been killed and 27 injured in the conflict, according to Libya al Ahrar TV, quoting Libya’s Ministry of Health.
The UN and France made shows of support Monday for the GNA’s leader, Fayez al-Sarraj, whom
Haftar is seeking to unseat.
The UN Secretary General’s Special Representative, Ghassan Salame, met Sarraj in his office in Tripoli to discuss ways the UN Support Mission in Libya “can assist at this critical and difficult juncture,” UNSMIL said on Twitter.
France, meanwhile, said that it wanted Sarraj to remain a “key player” in ongoing efforts to negotiate peace between the GNA and Haftar’s forces.
“France would like Sarraj’s government to remain a key player and to try and conclude the peace process negotiated in Abu Dhabi,” a spokesperson for French President Emmanuel Macron told CNN.
The European Union pleaded for a humanitarian truce on Monday, a day after warring parties ignored a UN call for a two-hour halt to fighting.
Departing from the EU’s prepared agenda to express concerns about Libya, the EU’s top foreign policy official Federica Mogherini called for “full implementation of the humanitarian truce to allow the civilians and the wounded to be evacuated from the city and to avoid any further military action and any further military escalation.”
Emergency services have so far been unable to reach casualties and civilians amid the violence. Refugees and migrants in detention centers are particularly at risk, according to the UN. Clashes are affecting residential areas, trapping civilians, and fighting has damaged electricity lines, UN spokesman Stephane Dujarric said in a statement Monday.
The flare in fighting in Libya forced the United States military to pull a contingent of its troops from the country over the weekend. On Sunday, US Secretary of State Mike Pompeo issued a statement calling on Haftar to stop the offensive.
“We have made clear that we oppose the military offensive by Khalifa Haftar’s forces and urge the immediate halt to these military operations against the Libyan capital,” he said in a statement Sunday.
In the eight years since Moammar Gadhafi was deposed and killed in the 2011 conflict, Haftar has been one of a handful of strongmen to take advantage of the nation’s descent into disarray.
Based in the city of Benghazi, Haftar wields control over much of eastern Libya, and has his sights set on Tripoli.
UN Secretary General Antonio Guterres was in Benghazi last week for talks with Haftar to push for an international peace deal, but left empty handed. Following their meeting, Guterres said he was leaving Libya “with a heavy heart and deeply concerned. I still hope it is possible to avoid a bloody confrontation in and around Tripoli.”
The UN repeated Guterres’ calls for a political solution on Monday.

CNN’s Nada Bashir in London and Saskya Vandoorne in Paris contributed to this report.

Photo: A crater left by an airstrike that targeted Mitiga airport in the capital Tripoli on Monday.

Q&A: A look at the latest fighting in Libya

US calls for halt to Libya offensive as clashes rage