Egyptian archaeologist Zahi Hawass has announced that his mission in Luxor has discovered an additional part of a city beneath the sand called “The Golden City” or “The Rise of Aten”.

The city dates back 3,000 years to the reign of King Amenhotep III, and was also used by Tutankhamun. The latest area to be discovered is the west wing of the city.

Hawass said that work had begun in this area in September 2020 to search for the funerary temple of Tutankhamun. The temples of Horemheb and Ay had previously been discovered in the same area.

According to Hawass, this city was the largest administrative and industrial settlement in the era of the Egyptian Empire on the West Bank of Luxor. It included houses that were three meters high and many streets.

Upon discovery, much of the city was in excellent condition, with intact walls and rooms filled with various tools.

The archaeological layers have remained intact for thousands of years, and the ancient inhabitants left them as if they were yesterday, Hawass said.

Betsy Bryan, a professor of Egyptology at Johns Hopkins University, commented that the discovery of this lost city is the second most important archaeological discovery after the discovery of Tutankhamun’s tomb.

She added that this discovery not only gives us a rare glimpse into the life of the ancient Egyptians in the era of the Empire, but it also helps shed light on one of the greatest mysteries in history– why Akhenaten and Nefertiti decided to move to Amarna.

Historical references tell us that the city consisted of three royal palaces of King Amenhotep III, in addition to the administrative and industrial center of the empire, she said.

A large number of archaeological discoveries have confirmed the history of the city, such as rings, scarabs, colored pottery and mud bricks, which bear the seals of the cartouche of King Amenhotep III.

The mission also found, in the southern part of the city, a bakery, cooking area and food preparation places complete with ovens and clay pots and large enough to feed a number of workers.

This city is fenced by a zig-zag wall, with only one entry point, leading to internal corridors and residential areas. This one entrance indicates that those in power sought to control entry and exit into closed areas, she added.

The herringbone walls are a rare architectural element in ancient Egyptian architecture, one that was used mainly at the end of the Eighteenth Dynasty.

As for the third area, mud bricks with seals bearing the cartouches of King Amenhotep III (Neb Maat Ra) indicate that the area was used to produce construction materials for temples and annexes.

A large number of casting molds for the production of amulets and decorative elements used in industrial activity, such as spinning and weaving, were also discovered, as well as rubble and glass. But the main area of ​​such activity has not yet been discovered.

Two unfamiliar burials of a cow or an ox were found inside one of the rooms, and research is still underway to determine the nature and purpose of these burials. A wonderful burial of a person was also found, with his arms stretched out to his side, the remains of a rope wrapped around his knees, while the position of the skeleton is somewhat strange, but there is more research on this matter, she mentioned. 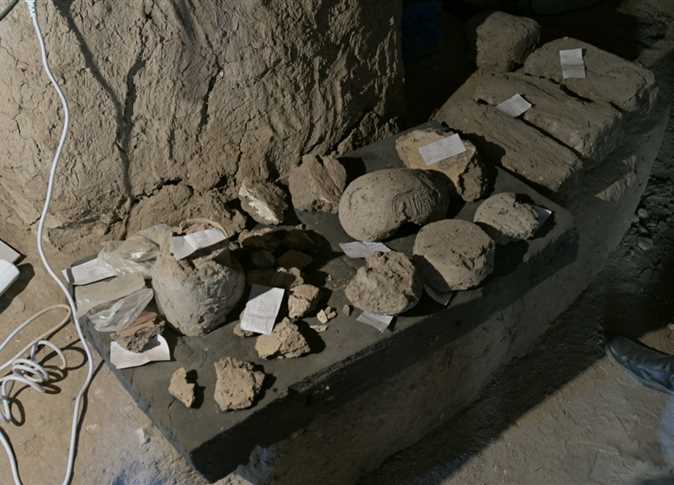