If virtuoso violinist and composer Abdo Dagher were Japanese, he would have been declared a national treasure.

As it is, his outspoken stance toward the Mubarak regime and its interference in Egypt’s cultural life meant that he was marginalized. Although celebrated abroad, he is virtually unknown in Egypt, where his concerts and recordings have been sadly few.

In his youth, Dagher performed with Om Kalthoum and other luminaries. He had no formal musical training, but has nonetheless composed works of surpassing passion, precision and intricacy. He sees himself as one of the last living purveyors of a hybrid musical tradition born in the cultural co-mingling of the Ottoman Empire.

Thanks largely to guitar and lute player Roman Bunka, who apprenticed with Dagher and frequently collaborates with pop star Mohamed Mounir, Dagher had concerts in Germany that were recorded and distributed on CD. Bunka also wrote the score and provided musical direction for “Al-Oud,” a documentary film featuring Dagher and directed by Fritz Baumann. “Al-Oud” won the Gold Hugo at the Chicago International Film Festival in 1992, and Dagher has since attracted students from around the world.

Dagher’s wife died this year after a protracted illness and in April one of his sons, a successful young fashion designer, was murdered. When offered condolences he says only “al-Humdillilah” (I thank God for everything), and although he’s at least in his late 60s, Dagher seems remarkably stronger than ever. His physical and emotional resilience clearly reflects a belief not just in God, but also in music, and its transformative, healing powers.

Dagher’s Hediyya al-Qubba flat is the scene of nightly musical jam sessions; its tiny chair-lined salon fills with some of Egypt’s great yet unsung talents.

When Dagher lifts his instrument to his chin, a current of heightened attention courses through the room. His compositions, like jazz, mix complex structured phrases with intervals of improvisation. His solos unfailingly captivate for their rich honeyed tone, the fierce beauty of his phrasing, and his emotional range, now tender, now scathing, always as articulate as a finely honed speech. This too is the voice of Egypt, valiant and true yet seldom heard.

Music lovers can hear Abdo Dagher perform accompanied by a 15-piece orchestra on 22 October at 8 pm at the Open Air Theater of the Cairo Opera House. 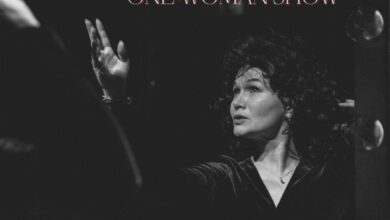