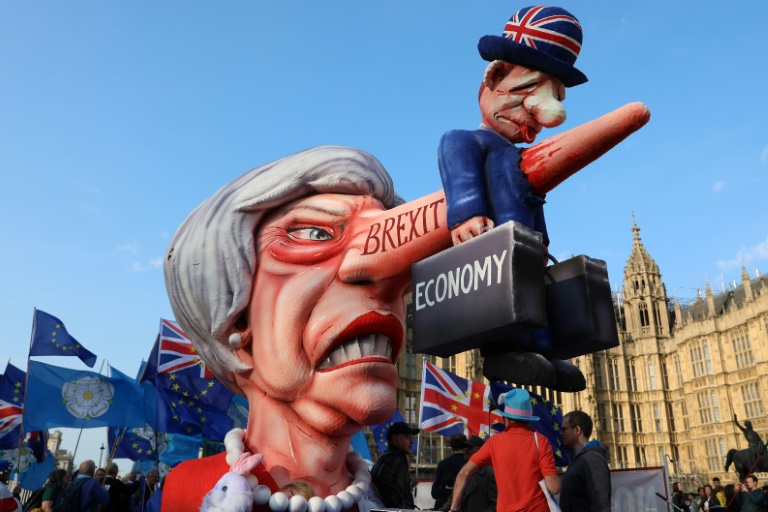 British Prime Minister Theresa May held crisis talks with her ministers Tuesday to try to resolve a months-long Brexit deadlock, as the EU warned of the growing risk of disorderly departure from the bloc next week.

May gathered her divided cabinet to try to agree the next steps after MPs failed for a second time on Monday night to agree an alternative to her unpopular withdrawal deal.

Brussels has set Britain an April 12 deadline to pass the divorce deal, settle on an alternative or crash out of the European Union, risking huge economic disruption.

In reality, the deadline is nearer as the EU has called an emergency leaders summit for April 10.

May’s deal has been rejected by the House of Commons three times but she says their failure to agree anything else means it is the only option, and could bring it back for a fourth vote this week.

“If the UK still wants to leave the EU in an orderly manner, this agreement, this treaty is and will be the only one,” he told a think tank in Brussels.

He added: “No deal was never my intended scenario, but the EU 27 is now prepared. It becomes day after day more likely.”

May’s deal aims to smooth Britain’s EU exit by settling its financial affairs, guaranteeing the rights of expatriate citizens and setting up a transition period until 2022 at the latest in which new trading terms could be agreed between London and Brussels.

But its proposals to maintain an open border with Ireland by keeping Britain temporarily in a customs union with the EU are strongly opposed by many MPs.

Fearful that her refusal to change course is putting Britain at risk of a “no-deal” exit, pro-European MPs last week seized the initiative by holding a round of votes on eight alternative options.

After failing to agree on any of them, they refined them down to four choices on Monday night — but once again, there was no majority for any of them.

However, the architects of that strategy have refused to give up, and unveiled a fresh plan to introduce legislation on Thursday that could force May to delay Brexit.

Conservative former minister Oliver Letwin conceded it would be difficult to get through both Houses of Parliament, but he and co-author Yvette Cooper, a Labor MP, said it was worth trying.

“Whatever agreement the government or parliament does or doesn’t reach over the next few days, the UK will need more time after 12 April if it is to avoid no deal at that point,” they said in a statement.

Britain voted by 52 percent to leave the EU in a 2016 referendum, but the process has been mired in divisions over the terms of the divorce and what kind of future ties to seek.

The political chaos forced May to ask the EU to postpone Britain’s exit from the original date of March 29, but she is resisting delaying much longer.

She says it would be “unacceptable” to ask British voters to take part in European elections in May, almost three years after they voted to leave the EU in the 2016 referendum.

But Barnier warned: “If the UK parliament does not vote in favor of the withdrawal agreement in the coming days, then only two options would remain: leaving without an agreement or requesting a longer extension.”

A government analysis leaked to the Daily Mail suggests a “no deal” scenario would undermine Britain’s security capabilities, cause a recession, and increase the cost of food by up to 10 percent.

On Monday night, a demand for a permanent customs union with the EU after Brexit only fell short by three votes — but May’s office highlighted the failure of MPs to agree.

“It is the second time the house has considered a wide variety of options for a way forward and once again failed to find a clear majority in favor of any of those options,” her spokesman said Tuesday.

“The government continues to believe that it is in the best interests of the country to leave with a deal.”