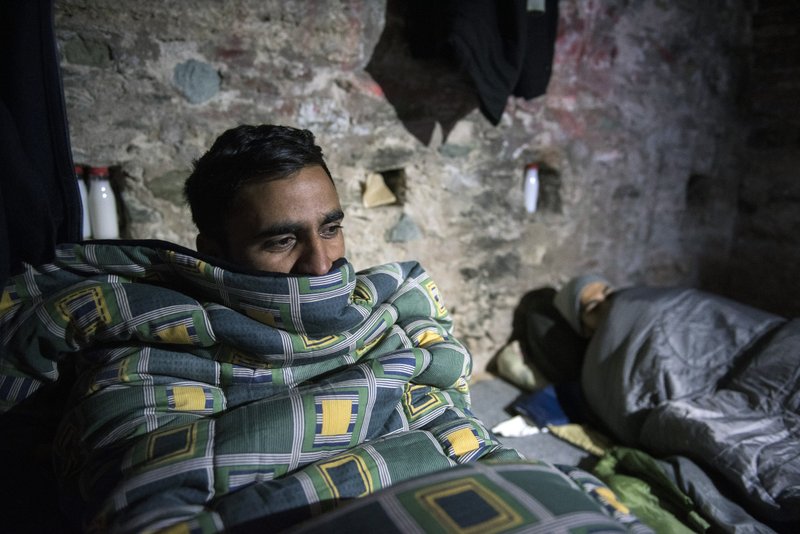 The stone walls that cut through the old quarter of Greece’s second-largest city defended Thessaloniki for more than 2,000 years. For a 24-year-old Pakistani immigrant, parts of the remaining ramparts mean survival.

“I came here with a dream, but I have nothing — no job, nowhere to live, nothing at all,” Adeel said after a near-freezing night in a dome-shaped casemate.

The European Union struck a deal with Turkey nearly two years ago to halt the surge of asylum-seekers attempting the dangerous sea voyage from Turkey to the Greek islands, the most popular route to Europe at the time. The crackdown also left tens of thousands of newcomers confined to Greece’s eastern islands or mainland camps during the long asylum application process.

Some desperate migrants, particularly those with slim chances of winning asylum, have turned to another route — heading overland through Turkey and wading across the heavily policed Evros River to neighboring Greece.

The land route’s increasing appeal is clear. Greek police caught 1,072 people who had entered the country’s Evros region illegally in October 2017, compared to 655 in the same month a year earlier.

Adeel was among those who slipped through the cracks. The young man said he paid smugglers $2,500 to take him from Turkey to Thessaloniki, a trip that involved crossing the river and a six-hour ride hidden in the back of a truck.

His money and hope ran out in Thessaloniki, where destitute and homeless migrants number in the hundreds, afraid to seek help for fear of deportation. The vast majority hoped Greece was just a stepping-stone to more prosperous European countries. But when they got here they found the routes north into Europe closed off to keep them out.

With chances of successfully gaining asylum slim and jobs near impossible to find in a country where unemployment still runs at 21 percent, most get by in Greece as best they can while waiting for a way to smuggle themselves onward.

“Everyone in Pakistan has a dream. And everyone who makes it to (Europe) comes with hope of achieving something, to do something for their parents,” Adeel said.

Taking shelter in a tiny casemate built in medieval times and depending on food handouts from volunteers and charities is far from his dream. Adeel wants to make it to the economically stronger heart of Europe, where he believes he has a better chance of landing a job.

Border jumps usually get more expensive the farther into central Europe immigrants try to get. From Greece, they can expect to pay $3,000-4,000 for the next leg of their journey, according to multiple interviews conducted by the Associated Press.

That might be traveling across Greece’s northern border by foot into Macedonia and from there to Serbia, hiding in an Italy-bound freight container or risking a flight with forged ID papers.

It’s a journey that remains out of reach for Kamran Misi, 33, a Pakistani immigrant who got stranded in Thessaloniki after he crossed the Evros River. Misi was homeless for six months until a church-run shelter took him in.

His goal now is to have something resembling a normal life.

“When we came here, we came here with a lot of hopes,” Misi said. “We had lot of dreams that we would find a peaceful life, a place to stay, and get work, whatever — like what all normal people need.”

Elena Stamatoukou, a volunteer at Solidarity Now, a charity that serves both Greeks affected by their country’s economic crisis problems and new immigrants, said the organization received aid requests in December from 289 people in Thessaloniki.

“They wanted shelter or legal advice, and all had one thing in common: They were homeless,” she said.

“We go there at around 3 a.m., when there is nobody else around, and we leave very early,” Muhammad Fiaz, an 18-year-old Pakistani who has spent more than five months wandering the streets of Thessaloniki.