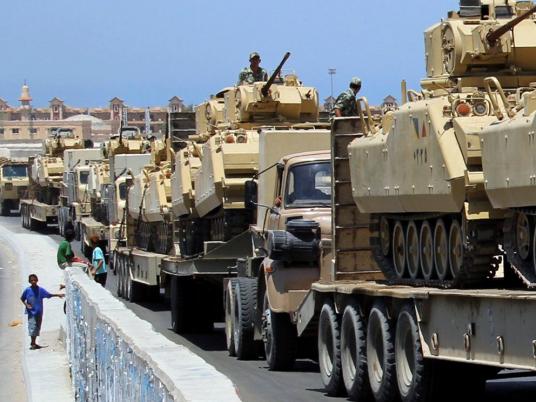 A deteriorating political and economic situation has created a tense situation for the president and the military, muddied with rumors, sly press statements and decrees.

It all began in late January with Defense Minister Abdel Fattah al-Sisi’s statements warning of the state’s collapse and expressing the military’s readiness to step in. This was followed by rumors that President Mohamed Morsy would sack Sisi altogether, raising flags around the relationship between the Islamist presidency and the Armed Forces.

Moreover, when violence took over the Suez Canal cities in January, Morsy resorted to the army to maintain security and imposed a curfew, which was not only ignored by the cities’ residents, but by the Armed Forces themselves, who passed the time participating in football tournaments with protesters.

Reports of meetings of the Supreme Council of the Armed Forces without its head, Morsy, to discuss domestic issues have also heightened the tension between both parties.

It was widely believed that the military and Morsy made deals behind closed doors after the presidential election, with the Muslim Brotherhood agreeing not to interfere in the army’s interests and to maintain its autonomy. And indeed, the Constitution, drafted by the Islamist-dominated Constituent Assembly, guaranteed the military’s sovereignty and protected it from legal and parliamentary oversight. However, various press statements, followed immediately by their denial, indicate that the Armed Forces and the president — along with the Muslim Brotherhood from which he hails — are not necessarily on the same page, despite statements claiming otherwise.

An increasingly tumultuous political and economic climate leaves many anticipating, if not calling for, military intervention, as the army continues to keep a close eye on the scene.

H.A. Hellyer, a nonresident fellow of the Washington-based Brookings Institution think tank, doesn’t see the military working in conjunction with the Muslim Brotherhood “any more than they have done since last summer, when General Sisi took over from Field Marshal Hussein Tantawi as the defense minister.”

“On the contrary, they appear to be quite content to remain distant from the presidency, as well as from exercising any governing authority at all, as long as their own autonomy is assured,” he explains.

Sherif Younis, a historian at Helwan University who has studied the inception of the Egyptian army, sees this distance as a product of the Hosni Mubarak experience, which was not favorable to the army.

Mubarak’s state, Younis explains, was a coherent bloc, which entailed the police, the army and the political face of it all — the ruling National Democratic Party. However, this clear coherence is no longer present under Morsy, he says.

As the military preserves its autonomy, Younis says, there are certain areas where it can set limitations around the ruling regime’s decision-making process in areas that pertain to its interests, such as development projects in the Canal cities or security in Sinai, as well as agreements with certain countries.

That said, experts agree the military has no interest in dipping its feet into the murky waters of politics, as long as its autonomy remains untouched.

Nathan Brown, professor of political science and international affairs at George Washington University in the US, says Egypt’s generals see the military as the “ultimate guarantor of the state and of the nation’s security, but they get involved in matters of governance unrelated to that mission only with reluctance.”

He explains that the military does not favor a role in public administration and policy.

“Even public order is an area where they prefer not to be drawn in,” he adds.

Brown says that the 2011 revolution was the first time the military institution took on a governing role. He explains that in 1952, the Free Officers group formed the Revolutionary Command Council to rule the country, rather than the senior command.

The SCAF stepped in as the de facto ruler of Egypt when Mubarak was ousted, Brown says, with little precedent for such a role.

Michael Hanna, senior fellow at the New York-based Century Foundation, also maintains that an intervention is not something the Armed Forces would consider lightly.

Hanna says the military does not perceive it to be in its interest to be directly involved in politics. With its autonomy preserved in the Constitution, he says, the experience it had in power after Mubarak stepped down was damaging for the military’s image and is not something it would want to repeat.

An intervention is not something the international community would encourage either, Hanna explains, adding that it would be looked upon negatively and would garner no support from the US, Europe or Turkey.

Hanna also adds that an intervention would put the military at risk of precipitating a violent confrontation with the country’s Islamists.

Meanwhile, Younis argues that should the turbulent political and economic situation continue to deteriorate, the army’s position remains unclear.

“In what capacity would the army’s intervention be? How will the equation change?” he asks.

He says an intervention is not a favorable scenario for the military, not only because of the experience it had after Mubarak was ousted, as argued by others, but also because “there is no clear method that can prove effective in solving Egypt’s current problems.”

That said, most analysts see the situation as disconcerting for the army nevertheless.

Brown says the current political situation must still be a cause for “tremendous concern.”

He believes the military is “sending messages that it does not want to be the guarantor of any particular group and that it sees the current disorder as deeply troubling.”

Hanna explains that the military is nervously keeping a close eye on the situation, adding that its recent statements are “a warning to civilian politicians that they’re concerned and they’re watching.”

For Younis, the areas that concern the military in the current moment are not crystal clear, hence making the grounds for intervention quite shaky.

Hellyer explains that if the country’s stability is “seriously threatened, the military may perceive that as impacting upon their autonomy, and they would probably, in that situation, change their approach, one way or the other.”

Hanna agrees. He explains that the Armed Forces care about broad-based stability and securing their own interests.

If the violence becomes much more rampant, and “if the country is on the cusp of a civil war, then the military might be forced to intervene,” he says.

Hanna, however, sees a military intervention as disastrous for democratic politics in Egypt, and would signal the collapse of the state.

“It would prove that Egypt’s experiment in the transition towards democracy was a complete failure,” he says.