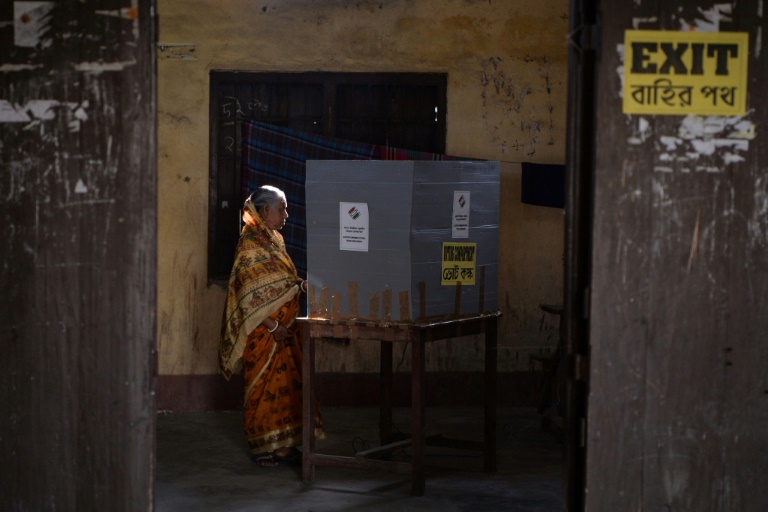 The scion of the Gandhi dynasty told Indians that the country’s “soul” was at stake on Thursday, as millions braved the hot sun to vote on day one of the world’s biggest election.

Opinion polls put Prime Minister Narendra Modi as favorite to win, but he faces a possible backlash from India’s 900 million voters over unemployment and rural poverty.

Because of India’s vastness, Thursday marked just the first of seven phases in the election to take place from the tea plantations of Darjeeling to the slums of Mumbai to the tropical Andaman Islands, and everywhere in between.

Security forces were on high alert due to the perennial danger of violence at election time, with five people including a local lawmaker killed in an ambush by suspected Maoist rebels this week.

Online too, a war rages with social media awash with disinformation, fake news, trolls and bots in what is Facebook and WhatsApp’s biggest market, where the world’s cheapest data tariffs have fuelled a smartphone boom.

Thousands of parties and candidates will run for office between now and May 19 in 543 constituencies across the nation of 1.3 billion people, with results not due until May 23.

Some of the 1.1 million electronic voting machines will be transported through jungles and carried up mountains, including to a hamlet near the Chinese border with just one voter.

Phase one on Thursday sees some 142 million people able to cast ballots.

Polling stations in northeastern states like Arunachal Pradesh bordering China were the first to open, followed by parts of Bihar in the north — where women in multi-coloured saris queued — and Jammu and Kashmir in the Himalayas.

In Assam in the northeast, queues started forming 45 minutes before voting began, including many young people — there are 84 million first-time voters in this election — who were visibly excited.

“It’s a great feeling to cast the vote, which makes me a part of the democratic system and makes me responsible for electing a good leader who can run the country,” Anurag Baruah, 23, told AFP.

Modi appealed in an early-morning tweet to his almost 47 million followers on voters to “turn out in record numbers and exercise their franchise.”

Modi and his right-wing Bharatiya Janata Party (BJP) swept to power in 2014 with their famous promise of “achhe din” (“good days”), becoming the first party to win an absolute majority in 30 years.

Critics say the BJP has since sought to impose a Hindu agenda on India, emboldening attacks on Muslims and low-caste Dalits trading in beef — cows are holy for Hindus — re-writing school textbooks and re-naming cities.

Modi has simplified the tax code and made doing business easier, but some of his promises have fallen short, particularly in rural areas where thousands of indebted farmers have killed themselves in recent years.

Growth in Asia’s third-biggest economy has been too slow to provide jobs for the roughly one million Indians entering the labour market each month, and unemployment is reportedly at its highest since the 1970s.

Rahul Gandhi, 48, hoping to become the latest prime minister from his dynasty — and aided by sister Priyanka — has accused Modi of causing a “national disaster”.

“You vote today for the soul of India. For her future. Vote wisely.”

“I want a government that thinks about women and brings down the high prices of rice and lentils,” Suman Sharman, 50, a housewife in Ghaziabad, told AFP.

“Cooking gas prices have gone up, sending children to school is expensive. It’s difficult to run the household. I want the new government to think about middle classes,” she said.

Gandhi, the great-grandson, grandson and son of three past premiers, has grown in stature since being derided in leaked US diplomatic cables in 2007 as an “empty suit”.

Election adverts show him hugging an emaciated peasant woman, while Congress’s leftist manifesto pledges to end abject poverty by 2030 and give cash transfers to 50 million families.

But Modi and the BJP’s formidable campaign juggernaut — the 68-year-old has been addressing three rallies a day in the campaign — will be no pushover, promising a $1.4-trillion infrastructure blitz.

Playing to its Hindu base, the BJP has also committed to building a grand temple in place of a Muslim mosque demolished by Hindu mobs in the northern city of Ayodhya in 1992.

But perhaps crucially, India’s latest military altercation with arch-rival Pakistan in February has allowed Modi to portray himself as the “chowkidar” (“watchman”) protecting mother India.

“Nationalism is our inspiration and inclusion and good governance is our mantra,” Modi, who even changed his Twitter handle to “Chowkidar Narendra Modi”, said at the launch of his manifesto.

But opinion polls are notoriously unreliable in India and much will depend on the BJP’s performance in several key states, in particular Uttar Pradesh and West Bengal.

“It reminds me of 2004 when (premier Atal Bihari) Vajpayee and the BJP lost when everyone expected them to win,” he told AFP.

India fights to save its heritage havelis in the desert