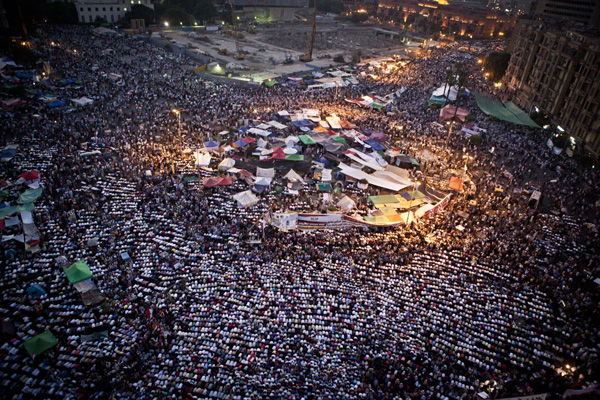 Today is 23 July, the anniversary of the 1952 revolution when a ragtag group of “Free Officers” overthrew the monarchy. Like almost every other national holiday, 23 July provides an opportunity to extol the mighty Egyptian military and how it always “veers toward the people,” as state-run daily Al-Ahram said, to offer them the freedom they crave.

President Mohamed Morsy gave a speech yesterday to mark the holiday. Most papers chose the most innocuous quote from the speech to feature in their headlines: “The July revolution was a defining moment in the history of Egypt.” The Wafd Party's paper Al-Wafd and the Muslim Brotherhood mouthpiece Freedom and Justice are the two most prominent papers to mention neither the 23 July anniversary nor Morsy’s speech about it. Freedom and Justice called the event “a memory for history.”

Morsy also criticized the downfalls of the July revolution, especially in its failure to implement one of its major goals of implementing a sound democracy over the past 30 years. Quoted in Al-Ahram and independent newspaper Al-Shorouk, Morsy also spoke of the military’s decision to veer toward the people again in forming a second republic after the 25 January revolution last year.

“There is no history for a people that erases its past,” read a statement by the Supreme Council of the Armed Forces, according to state-run Al-Akhbar. The military attacked those who “try to distort the revolution and its memory.”

The statement might refer to the fact that many Islamist political parties and groups refrained from celebrating the holiday, Al-Shorouk said. “The July revolution is no longer distinguished and was completely overshadowed by the 25 January revolution,” Brotherhood Shura Council member Sayed al-Nazily is quoted by the paper as saying. To him, the 23 July revolution ended in 1954, the same year many Brotherhood members were arrested and tortured, and when their persecution under then-President Gamal Abdel Nasser began.

Ironically, the SCAF statement said people should look around and see “water, electricity and education” to correctly evaluate their revolution.

A look at independent Al-Shorouk would show why this statement is a slightly ironic, as Egypt is now experiencing an especially annoying succession of blackouts, as the Electricity Authority is unable to cope with heightened summer and Ramadan energy consumption. Al-Wafd reported that Electricity Minister Hassan Younis “raised the white flag” in surrender to the fact that the power outages are beyond his control, because they are the result of shortcomings from many other ministries and government agencies.

Al-Ahram said most villages have been living in the dark the past few days because they were hit most by the power outages.

Al-Shorouk also mentioned the chaos in coordination offices in universities, where prospective students weren’t able to efficiently apply because of the power outages. Last week featured the annual chaos of final exams, and many wrote about the flawed education system. Al-Wafd says the Higher Education Ministry had to decrease its standards for college acceptance to accommodate more students.

Besides giving the 23 July speech, Morsy met with striking workers from the Mahalla textile factory to strike a deal that would bring the more than 20,000 workers back to the production lines. Labor activist and former presidential candidate Khaled Ali set up the meeting after many of the workers refused to meet with a government official until their demands were met. The strike, which calls for raising the bar for profit redistribution and bonuses — which decreased after the revolution — is gathering a lot of support from other workers and has already triggered similar movements.

Al-Akhbar appeals to the heightened sense of religiosity during Ramadan to try to convince people against protesting, saying not to protest so that “you do not lose your fast.” Traditionally, eating, swearing, lying and being sexually active are ways Muslims break their fast in Ramadan.

Many will have been wondering why Morsy has been doing so much but has yet to appoint a new cabinet. “The people want a new government,” reads the main Freedom and Justice headline. But the rest of the headlines highlight Morsy’s achievements, such as: “Sources: 537 details will be released today” and “Morsy: The price of bread will stay steady.”

For those who are counting, the pipeline that carries natural gas to Israel around Arish city in North Sinai was attacked for the 15th time since February last year. Al-Shorouk says the attack is the same as the previous 14 explosions. This time, however, they sabotaged the pipeline when it was already out of order.