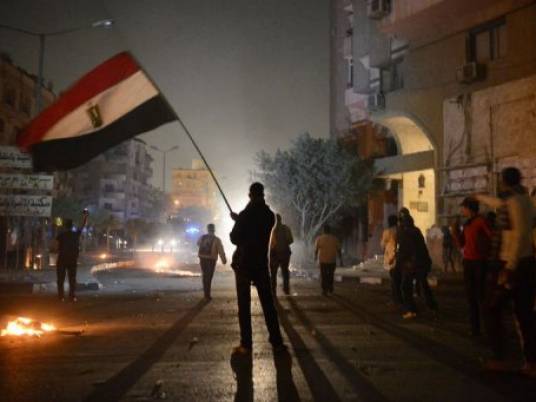 The fallout from Friday’s “Battle of Moqattam” between opponents and supporters of the Muslim Brotherhood tops the news in all papers on Monday.

All of today’s papers highlight the accusations and legal charges pertaining to the armed clashes which took place outside the headquarters of the Muslim Brotherhood in the hills of Moqattam on Friday, dubbed by the media as the “Battle of Moqattam.”

The Brotherhood’s mouthpiece, the newspaper Freedom and Justice, unsurprisingly presents its supporters as victims, running photos on its front page of one its members with a bandaged head in a hospital bed, with another photo of the Brotherhood’s top Supreme Guide, Mohamed Badie visiting his fallen followers in hospital.

The paper, which takes its name from the group’s political party, also runs a photo of one of their buses set ablaze by opponents during Friday’s clashes. “Legal charges against public figures political parties and movements who instigated the violence” reads the top headline. The paper accuses the Dostour Party, the Wafd Party, the Popular Current, the April 6th Youth Movement, the National Association for Change and the Kefaya Movement of being behind the calls for violence.

Also accused of instigating violence are the administrators of Facebook groups, including a fan page for satirical television comedian Bassem Youssef and a pro-Mubarak group called “We Apologize President,” along with another group calling for a return to military-rule.

The article mentions that a pro-regime lawyer from the Salafi Front has filed charges with the Public Prosecution against former presidential candidates Mohamed ElBaradei, Hamdeen Sabbahi and Khaled Ali. Ironically, Ali was one of those injured during Friday’s clashes.

Meanwhile, privately owned Al-Shorouk reports on “12 different legal charges filed against the Brotherhood” in light of reports of beatings, torture and physical abuse of opposition protesters during the “Battle of Moqattam.”

Privately owned papers Al-Tahrir and Al-Watan both publish photos of numerous bandaged, cut and bruised opposition protesters and others who were allegedly tortured by Brotherhood members. According to Al-Tahrir’s “Testimonies of the Brotherhood’s torture victims from Bilal Mosque,” seven protesters claim that were beaten by groups of pro-regime elements who tortured them into confessing that they were hired agents.

A number of protesters report that following the beatings, the Brotherhood members transported them to a desert road, stripped them of their clothes and threw them out of vehicles in succession along the road.

Also making headlines is the clouded warning that President Mohamed Morsy delivered on Sunday to opposition and trouble makers, along with news of the protests led by pro-regime Islamist elements outside the Media Production City – against satellite channels and critical voices being broadcasted from within this private media complex.

Al-Shorouk reports that the “clashes at Guidance Bureau lead to Islamist protests at Media Production City.” The article explains that pro-regime Islamists responded to events in Moqattam by organizing protest rallies outside the Media Production City — in Cairo’s 6th of October suburb — in an attempt to keep private satellite channels from criticizing and “inciting violence against” Morsy’s Islamist regime.

Al-Wafd reports that the rally is small yet obstructive, involving “tens” of pro-regime elements, some of whom “scuffled with photographers and cameramen in attempt to keep them from covering their protest.”

In other news, the warning delivered by Morsy on Sunday — against instigators and perpetrators of violence in Moqattam — has made headlines in nearly all papers.

Al-Akhbar reports that “the president will not tolerate more bloodshed” and then quotes Morsy’s ambiguous warning about “fingers meddling in Egypt.” Morsy is quoted as saying that there are “many that do not want this nation to stand on its feet. I will cut off any finger that meddles in Egypt" adding that “I can see two or three fingers that are meddling inside."

Morsy is also quoted as saying that he would take "appropriate measures" and “harsh decisions” against “those politicians who incite violence. The Islamist president added, "I will not be happy if investigations find some politicians guilty."

In contrast, Al-Watan Newspaper runs a headline from the perspective of Egypt’s political opposition: “Morsy ignores Brotherhood’s aggressions in Moqattam while targeting opponents and protesters.”