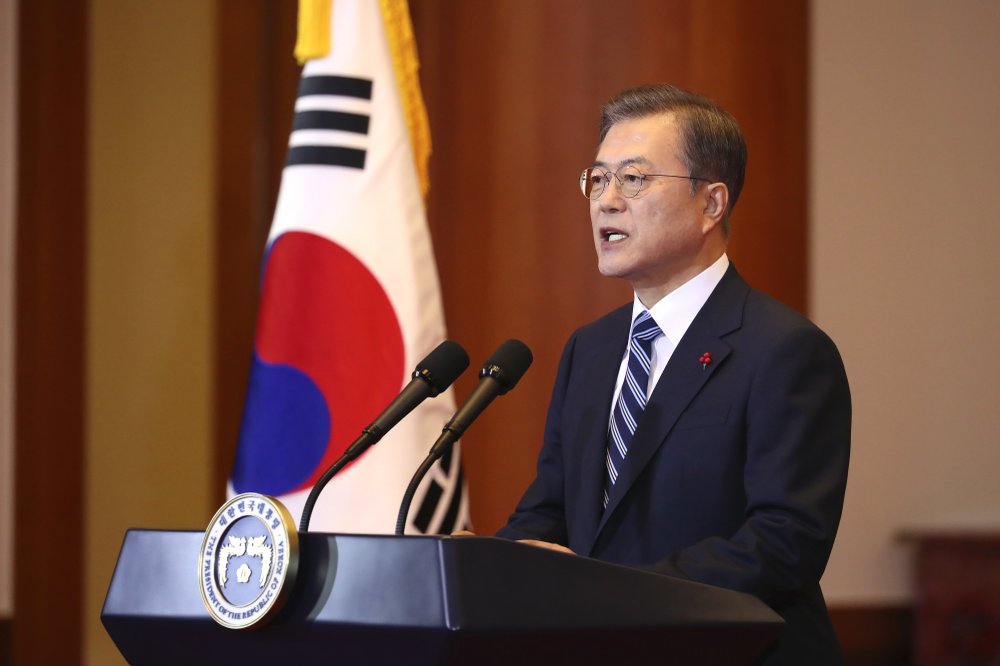 In his New Year’s speech, Moon also reaffirmed his government’s commitment to resume inter-Korean economic activities that have been held back by U.S.-led sanctions imposed on the North over its nuclear weapons and missiles program. Any resumption would depend on progress in the larger nuclear negotiations between Washington and Pyongyang.

North Korea suspended virtually all cooperation with the South during a deadlock in those larger talks, while also pressuring Seoul to break away from Washington and restart the joint economic projects, which would breathe life into the North’s broken economy.

“The South and North should work together so to create the conditions for Chairman Kim Jong Un’s visit (to South Korea) as soon as possible,” Moon said during a nationally televised speech.

“I have a willingness to meet again and again and hold ceaseless dialogue. We will continue to invest efforts for the resumption of the Kaesong industrial park and tours to Diamond Mountain,” he said.

South Korean tours to the North’s Diamond Mountain resort were a major symbol of rapprochement between the rivals before they were suspended in 2008 after a North Korean guard fatally shot a South Korean tourist.

Moon’s comments came days after Kim appeared to sideline inter-Korean issues during a key ruling party conference where he declared to strengthen his nuclear deterrent in face of “gangster-like” U.S. sanctions and pressure. The North Korean state media’s account of the meeting did not include any mention of South Korea.

Pyongyang’s official Korean Central News Agency said Tuesday that Kim visited a fertilizer factory recently and reiterated his call for his people to stay resilient in a struggle for economic “self-reliance” in face of sanctions, saying the “fiercer the adverse wind raised by the hostile forces gets, the fiercer our red flag will flutter in high spirits.”

The North also in October demanded that the South clear out its hotels and other properties at the North’s Diamond Mountain resort, expressing frustration that the South won’t defy international sanctions and resume South Korean tours at the site.

The quick erosion in inter-Korean relations been a major setback to Moon, a son of North Korean war refugees who met Kim three times in 2018 while expressing ambitions to reboot inter-Korean economic engagement.

In their third summit in Pyongyang in September 2018, Kim and Moon had vowed to restart South Korean tours to Diamond Mountain and normalize operations at the Kaesong factory park when possible, voicing optimism that sanctions could end to allow such projects. Kim also during the meeting promised Moon he’d visit Seoul “in a short time.”

But without a breakthrough in the nuclear talks between Washington and Pyongyang, the economic projects remain shelved. No North Korean leader has visited South Korea’s capital since the 1950-53 Korean War ended in a cease-fire.

Image: South Korean President Moon Jae-in speaks during his New Year’s speech at the presidential Blue House in Seoul, South Korea, Tuesday, Jan. 7, 2020. Moon said he hopes to see North Korean leader Kim Jong Un fulfill a promise to visit the South this year as he called for the rival Koreas to end a prolonged freeze in bilateral relations (Lee Jin-wook/Yonhap via AP)