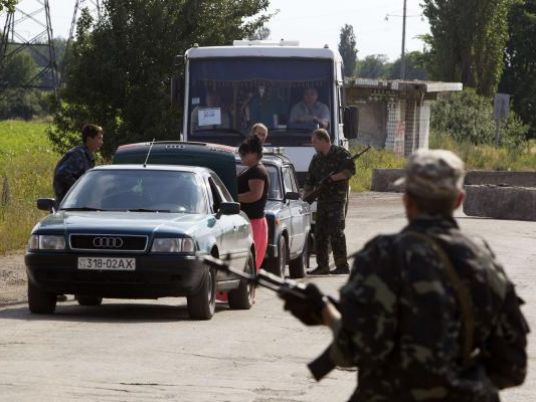 Ukrainian government forces pressed on with a military drive against pro-Russian separatists on Wednesday as Ukraine, Russia, Germany and France prepared a meeting of foreign ministers to try to bring the crisis in Ukraine's east under control.
Rebels fired a shoulder-launched missile that struck and damaged a SU-24 attack plane, a military spokesman said, while one Ukrainian border guard was killed in the early hours in a mortar attack on his post on the border with Russia.
"The armed forces and the National Guard are continuing the offensive on terrorists and criminals. The actions of our military are effective and are having results," parliament speaker Oleksander Turchynov said.
Ukrainian President Petro Poroshenko, under pressure at home to take a forceful line against separatists who have been fighting government forces since April, refused to renew a ceasefire on Monday night and ordered a government offensive "to answer the terrorists, militants and marauders."
His move won backing from the United States, but drew fire from Russian President Vladimir Putin who said the newly-elected Poroshenko had veered off the road to peace.
In a fresh attempt to stop the spread of the crisis, which has caused the biggest Russia-West confrontation since the Cold War, Russian, Ukrainian, German and French foreign ministers were to meet in Berlin later on Wednesday.
Diplomats cautioned against expectations of a breakthrough.
"There is not a precise objective. It's an opportunity to work on peace efforts, but we don't want to raise expectations," a French diplomatic source said on Tuesday.
Russian Foreign Minister Sergei Lavrov had backed the idea of the meeting with France's Laurent Fabius and Ukraine's Pavlo Klimkin during a phone conversation with his German counterpart Frank-Walter Steinmeier late on Tuesday, the Russian foreign ministry said.
Poroshenko, who accuses Russia of fanning the conflict and allowing fighters and equipment to cross the border to support the rebels, turned his back on another renewal of a 10-day unilateral ceasefire after phone talks involving Putin, German Chancellor Angela Merkel and French President Francois Hollande.
"Right to defend country"
While Poroshenko came under attack from Putin, the United States rallied to his defense on Tuesday, with a State Department spokeswoman saying he "has a right to defend his country".
"It takes two to keep a ceasefire," US State Department spokeswoman Marie Harf told a news briefing. "President Poroshenko put in place a seven-day ceasefire; he abided by it, but the fact remains that the separatists, many of them weren't adhering to it, and he has a right to defend his country."
Poroshenko and his security chiefs say the rebels carried out numerous breaches of a week-long unilateral ceasefire declared on June 20 and extended by three more days on June 27.
The Ukrainian foreign ministry says 27 servicemen have been killed since the start of the ceasefire.
The 48-year-old leader, who says he is still committed to a peace plan which has been largely ignored by the rebels, faces a possible popular backlash at home if he does not take a more forceful line.
There was no immediate word on overnight military successes by government forces though acting defense minister Mykhailo Koval said late on Monday that they had carried out strikes against 120 rebel positions.
"We have to eliminate the (rebel) fighters who have brought misfortune to the land of the Donbass. And we are doing just that," he said on TV channel "Ukraina", referring to the coal mining region where the rebels have declared independence.
Military spokesman Oleksiy Dmytrashkovsky said the pilot of the SU-24 aircraft that was struck by a rebel missile on Wednesday managed to bring the plane under control and "destroy" the enemy position.
He said that since the launch of the new offensive on Tuesday one Ukrainian paratrooper had been killed by sniper fire and 13 others wounded.
Ukraine has been in turmoil since a Moscow-backed president, Viktor Yanukovich, walked away from a free-trade deal with the European Union last year. He was toppled in February after street demonstrations, and Moscow responded in March by seizing Ukraine's Crimea region.
Separatism erupted in the Russian-speaking east in April, where rebels seized buildings and strategic points, declaring "people's republics" and saying they wanted union with Russia.
At least 150 Ukrainian servicemen and hundreds of others including police, civilians and rebels, have been killed in the fighting.
On Friday, Poroshenko, defying threats by Russia to carry out retaliatory trade action, signed the EU deal that Yanukovich had rejected last year.
The EU and the United States have imposed sanctions on lists of Russian officials and small firms they blame for undermining Ukraine's territorial integrity, and have threatened more serious economic measures if Moscow does not rein in the rebels. Russia denies supporting them.