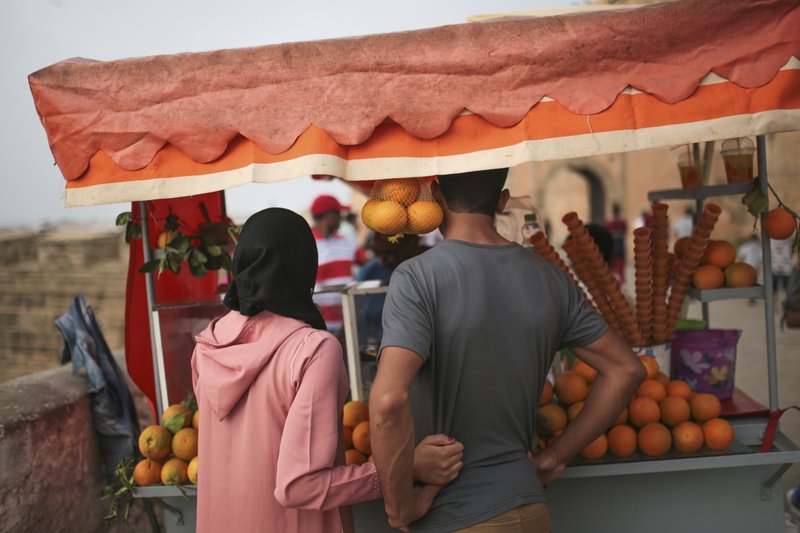 For 23 years, Khadija says her husband raped her, nearly every day.

And her case is far from unique, according to counselors at the Annajda Center in Rabat, one of over 1,000 associations in Morocco working to advance women’s rights in the Muslim majority kingdom.

“I recall one time having just arrived home. He jumped on me at once, snatching my djellaba, and pushing me into the bedroom,” she recounted, her eyes wide with the pain of the memory of how her tormentor tore her long robe.

“I knew what awaited me. He beat me. He raped me. He left me in blood and tears,” she recounted to The Associated Press. She spoke on condition that her last name not be used, fearing for her safety.

Last month, Morocco’s Parliament passed a long-sought law on combating violence against women, recognizing some forms of abuse for the first time and criminalizing some forms of domestic violence. But critics say it doesn’t go nearly far enough to address the deep-seated problem in this North African country.

Amina Labouni, a social worker at the Rabat-based women’s center, said that on average, 40 women flock to the safe space each month, seeking legal consulting and psychological help.

“Unfortunately, most of the victims we receive end up not proceeding with legal measures against their spouses because they are the only bread providers in the household,” she said.

Women’s rights vary across North Africa, and Morocco took a big step toward improving them with a 2004 family code that raised the marriage age for women to 18 and granted women more marriage rights.

But violence against Moroccan women remains widespread, and largely taboo, in a country that is seen as a haven of moderate Islam and relative prosperity in the region.

A survey by UN Women, a United Nations agency for the empowerment of women, carried out in Rabat, the Moroccan capital, and in some neighboring cities found that 41 percent of the men surveyed believe that financial support justifies marital rape.

Over 50 percent reported having been emotionally abusive to their wives, and 15 percent acknowledged using physical violence against women.

The survey, conducted in 2016 and released last month, found that 62 percent of the men interviewed believe women must tolerate violence in order to preserve family unity. The study questioned 2,400 men and women in person over three months. No margin of error was given.

Most are either illiterate or have a primary school degree, and about half are housewives, Labouni said. “They need to know that it is possible to break from subservience and claim their rights over their bodies.”

Concern about sexual violence gained momentum in August, when horrific video footage circulated online of boys on a bus ripping the clothes off a girl and groping her breasts, among other abuse. Neither the passengers nor the bus driver intervened.

The driver was later fired for not stopping the assault. The boys, aged between 15 and 17, were arrested. The girl’s parents said she may need long-term care and has been “terribly affected” by the incident.

The law passed on February 14 is meant to help women, and raise awareness, authorities said.

It was described as “a real breakthrough in the protection of women’s rights” by Minister of Family and Solidarity Bassima Hakkaoui, of the moderate Islamist Justice and Development Party, or PJD, which leads the government coalition.

But the legislation met criticism and calls for amendments by Moroccan women’s groups and international watchdogs, including Human Rights Watch and Amnesty International.

“The bill suffers from so many shortcomings; it is a shame to be referred to as a law”, said Stephanie Willman Bordat, founding partner of Mobilizing for Rights Associates, a Rabat-based non-government group.

“Together with dozens of women associations, we sent emails, messages, held private meetings, organized conferences, wrote reports and lobbied for a revision,” added Bordat, who has worked for years on promoting women’s rights across the Maghreb and North Africa.

But the law was approved, virtually unchanged.

The law also does not criminalize marital rape — so women like Khadija cannot demand legal protection from their husbands.

Khadija’s chances of being housed in a shelter that accepts survivors of domestic violence are also scarce. There are fewer than 10 shelters in all of Morocco, according to Human Rights Watch, and few receive any government funding.

PJD lawmaker Boutaina Karouri, who voted for the legislation, said “the fact that a law on violence against women was adopted by Morocco, after years of advocacy, is a sufficient a reason to celebrate.”

Putting Women at the Heart of Social Innovation