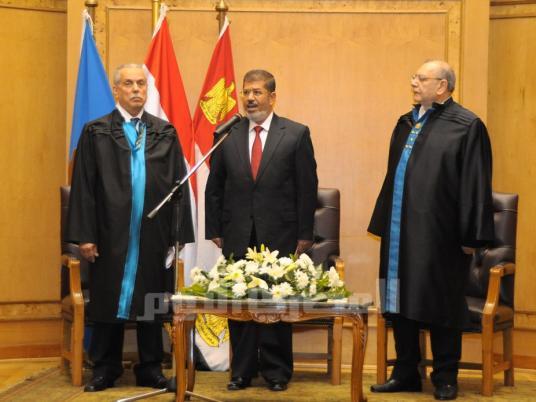 Many Egyptians have not yet sobered from the ecstasy of finally getting a civilian president, for the first time in the history of the 60-year-old republic.

But only a few days after the announcement of Muslim Brotherhood presidential candidate Mohamed Morsy’s victory, signs point to a less-than-perfect picture, in which the old regime’s rules still persist.

Despite the showdown between the Supreme Council of the Armed Forces and the Brotherhood in the months preceding the election, Morsy’s victory reveals a new phase of political arrangements between the two. For one, they have already come to a decision on how to split control over government institutions, said Essam Haddad, a Morsy aide.

According to Haddad, an initial agreement entails that the army will maintain control over its budget and internal affairs but will not intervene in the assembly charged with drafting the country’s new constitution.

An anonymous source told Al-Masry Al-Youm that the Brotherhood will be in charge of the ministries of Finance and Foreign Affairs but will be required to keep away from the Defense, Interior and Justice ministries.

The amicable agreement between the military council and the Brotherhood would confine the Islamist group’s authority to these institutions, and safeguard the SCAF from being sidelined by a non-allied president.

“We are indeed in negotiations with the military council,” said Sobhi Saleh, a leading Brotherhood figure.

However, the arrangement plants a ticking time bomb that could jeopardize Morsy’s presidency, once he and his group seek to expand their powers.

Bahey el-Din Hassan, director of the Cairo Institute for Human Rights Studies, said the two sides had clearly come to an agreement.

“Morsy’s victory is not just based on getting the majority of votes, but also on a power-sharing agreement that took place with the SCAF, in which the military will maintain its control over the national security ministries and institutions, including defense, police, intelligence and justice,” Hassan said.

But Morsy may have had few other options. “At least for now, Morsy has little choice but to agree to these conditions or he might lose everything, especially with the existence of the supplementary constitutional declaration,” Hassan said.

Only a few days before the election, the ruling military council added an addendum to the Constitutional Declaration that has governed Egypt since March 2011. The declaration limits the powers of the president and adds to those of the military council, with respect to the state budget, constitution-writing assembly and the ability to declare war, for which the president must first obtain approval from the military council. The document also takes away from Morsy the title of commander-in-chief of the armed forces.

But a power-sharing agreement with the military would be a de facto continuation of the old regime which, since 1952, has seen a clear split between so-called service and sovereign ministries. Sovereign ministries are usually related to national security, and they are the ones the Brotherhood is expected to cede.

Morsy and his group have changed their rhetoric toward the SCAF since his victory and after vehement criticism over the last few weeks. In his first national address on Sunday, Morsy thanked the armed forces for their efforts during the transition. Field Marshal Hussein Tantawi, the head of the military council, met with Morsy on Tuesday and said the military would stand with the incoming president.

“Morsy and his campaign are pragmatic. They don’t want a showdown at this moment — it’s not part of their makeup. They want gradual change and they want to be true to the revolution at the same time,” said Maha Azzam, an associate fellow with the Middle East and North Africa Programme at Chatham House and an expert on Islamist groups in Egypt.

Morsy, a longtime leading Brotherhood figure, was twice imprisoned for participating in protests, first over judiciary independence in 2006, and on 28 January last year, during the 18-day uprising.

The Brotherhood itself spent the majority of its 84-year existence as a banned group, subject to an array of security clampdowns and mass arrests by a police force that was taught to treat the group with suspicion and often resorted to brutal tactics to suppress its members. The desire for revenge is not inconceivable for some.

Yet the Brotherhood and its Freedom and Justice Party have been displaying a strong tendency toward political pragmatism instead of dogmatic ideology, observers said.

“There’s a general agreement in the FJP and the Morsy campaign to open a new page with all groups and institutions. We understand why some may have a misconception of us, our history and our work on the ground, and we will work on changing that,” Ali Batteekh, another leading Brotherhood figure and a former MP, told Egypt Independent.

But while no significant clashes are expected to ensue between Morsy and the security apparatus, obtaining full control over it would require an element of purging.

“He will have to get rid of some of the Interior Ministry figureheads to get a better grip on the police,” said Mohamed Mahfouz, a former police officer and a founding member of the Honorable Police Officers Coalition. Mahfouz believes garnering loyalty from the rest of the police will not pose a significant problem.

“The Police Academy teaches obedience to power. Even if you put a monkey on the throne, they would obey him,” said Mahfouz. He said cadets in the Police Academy were also taught to look at all political groups with disdain, not just the Brotherhood.

Other institutions, such as the state media, have traditionally been anti-Brotherhood. Yet their modus operandi is to pay allegiance to whoever is in power, a fact demonstrated by how quickly they changed their long reverence to Hosni Mubarak once the ruling military council took his position in February 2011.

Today, questions still loom over whether the state-owned media is ideologically opposed to Islamists in a way that could entail a Mubarak-style grip over them.

“There was a vicious media campaign to tarnish the image of Islamists. They played a big part in political polarization in the recent period by propagating the failure of the Brotherhood in Parliament,” said Shahira Amin, a state TV presenter.

State media has been under the control of the military authorities, which will seek to maintain it, Amin said. “The state media loyalty will probably remain to the SCAF. It’s in their interest to maintain the status quo, which might jeopardize Morsy’s presidency,” she added.

While the current word is on Morsy ceding “sovereign” powers to the ruling generals, this doesn’t necessarily reflect the ultimate ambitions of the Brotherhood, said Mohamed Menza, an associate professor of political science at the American University in Cairo.

“They have been [splitting power] in their favor since before the election,” said Menza, referring to what he said was negotiations by the Brotherhood to secure a quota for its members in the police force.

Menza said the SCAF would not relinquish its control over these institutions, and that if Morsy and the Brotherhood attempted to control them, the council would use its control of the Defense and Interior ministries to suppress them.

“If Morsy ruled with the goal of maximizing the Brotherhood’s members in state institutions, and not seeking genuine reform based on meritocracy and democratic principles, it would lead to the failure of his Renaissance Project and the end of the Brotherhood,” he added, referring to Morsy’s electoral platform.

For others, like the Brotherhood’s Batteekh, controlling government institutions is not the main priority. “I think our main issue is the process of bringing forward a new Parliament or settling a new constitution. I see that as the biggest impediment to Morsy having a successful presidency,” he said.