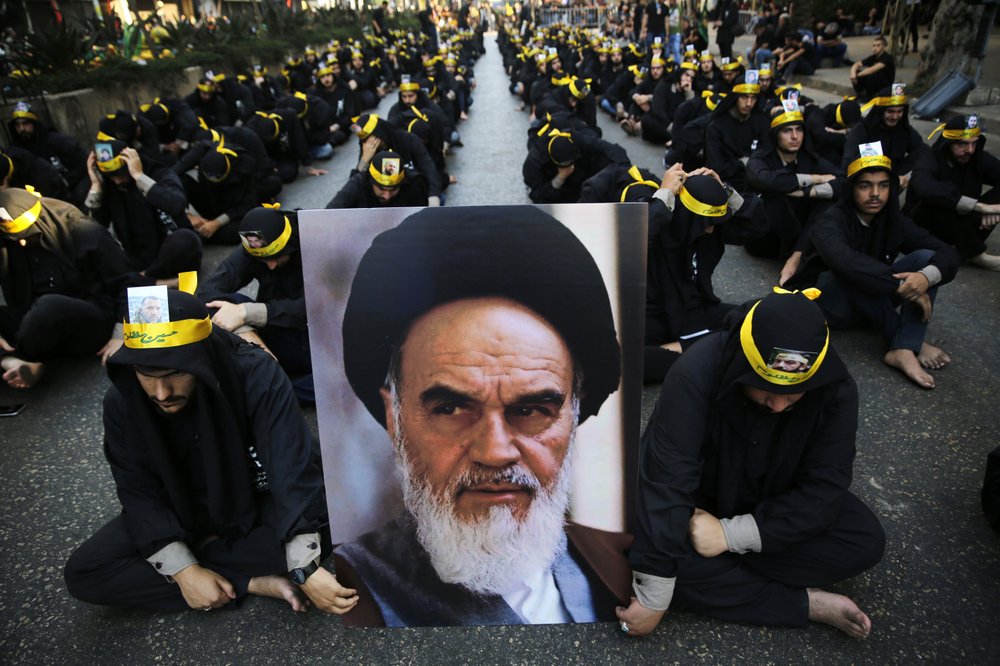 BEIRUT (AP) — Millions of Shiite Muslims were marking Ashoura on Tuesday, one of the most sacred religious holy days for their sect, holding rallies, prayers and self-flagellation amid soaring tensions in the Middle East.

“Any way against Iran will be a war against the Axis of Resistance,” said Hezbollah leader Hassan Nasrallah, referring to an Iran-led anti-Israel alliance that includes Syria, Iraq and Lebanon because of the ties of either their governments or powerful militias with Iran.

“Any imposed war on the Axis of Resistance will mark the end of the Zionist entity and the end of America’s dreams in the region,” he declared, speaking via large screens to his supporters.

The somber day of Ashoura commemorates the killing of the Prophet Muhammad’s grandson, the Imam Hussein, by a rival Muslim faction in Karbala in present day Iraq, in 680 A.D. Hussein and his descendants are seen by Shiites as the rightful heirs to the prophet. Hussein’s killing has been attributed with cementing the schism between Shiite and Sunni Islam.

In Iraq, hundreds of thousands held Ashoura processions amid beefed-up security in Karbala and the capital, Baghdad, marching through the streets. Many of the faithful beat their chests and lashed themselves with chains in a symbolic expression of regret for not being able to help Hussein before his martyrdom.

In recent years, Ashoura processions have been attacked by extremist Sunni militants.

On Sunday night, thousands marched toward the holy shrine of Imam Hussein, which had been lit up on the eve of the celebration.

This year’s commemoration comes amid rising tensions in the Middle East and the crisis between Iran and the U.S. and its ally Israel in the wake of the collapsing nuclear deal between Tehran and world powers.

Israel has recently expanded its war on Iran and its allies in the region, and is believed to have struck targets as far out as Iraq in recent weeks, drawing outrage and pledges of retaliation.

Israeli Prime Minister Benjamin Netanyahu said last month that Iran has no immunity anywhere and that the Israeli military forces “will act — and currently are acting — against them.”

Nasrallah, in his speech, repeated that his group will respond to any further Israeli attack. “There are no red lines,” he said.

On Monday, planes targeted posts belonging to Iranian-backed militias in eastern Syria, near the Iraqi border — the latest in such attacks across the region. There were conflicting reports on what exactly was targeted and how many people were killed.

The Syrian government on Monday said Israeli planes targeted a military camp that was being set up for the Syrian military and its allies. It blamed the U.S., and said the attack “crossed all red lines.”

Separately, a new explosion was reported in a weapons depot in Iraq belonging to Sunni factions within the mainly Shiite, Iran-backed paramilitary force known as the Popular Mobilization Forces.

The explosion occurred late Monday night south of al-Hit in Anbar province, northwest of Baghdad, according to an official who is a member of the faction. The official spoke on condition of anonymity in line with regulations.

There was no government confirmation or comment, and it was not immediately known what caused the blast, the latest in a series of similar explosions that have been blamed on Israeli drones.

Associated Press writers Qassim Abdul Zahra and Khalid Mohammed in Baghdad, and Fadi Tawil and Hussein Malla in Beirut contributed to this report.

Photo: Lebanese Shiite supporters of the Iranian-backed Hezbollah group hold a portrait of Iran’s supreme leader Ayatollah Ali Khamenei as they listen to the death story of Imam Hussein during the holy day of Ashoura, in the southern suburb of Beirut, Lebanon, in Beirut, Lebanon, Tuesday, Sept. 10, 2019. Millions of Shiite Muslims around the region on Tuesday marked Ashoura, one of the most sacred religious holy days for their sect, holding rallies, prayers and self-flagellation amid soaring tensions in the Middle East. (AP Photo/Hussein Malla)

Hezbollah: What good would a German ban do?

Hezbollah says it shot down Israeli drone over south Lebanon

Hezbollah vows to strike 'deep inside' Israel if attacked again